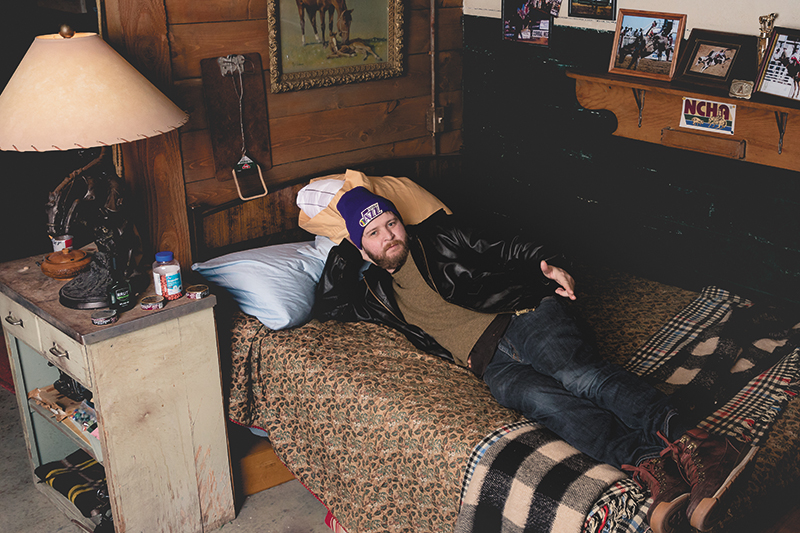 Mike Brown makes himself at home on the set of Yellowstone at Park City Film Studios. | Photo: LmSorenson.net

Mike Brown: Quiet on the Set!

Park City is an interesting place. Personally, I am not a fan of the city, and I’m glad it’s isolated from my abode in Rose Park. The best reason to go there isn’t because of the overpriced ski resorts or to flirt with the abundant number of trophy wives. It’s just to get out of the inversion. Sometimes I’ll trade dealing with the people and shitty drivers for clean air. Luckily, I was able to do that recently and also visit Utah Film Studios for SLUG’s Film Festival Issue.

Initially, my intentions for this month’s Film Festival Issue of SLUG was to try to trick a movie or TV set into letting me be an extra. My lack of confidence in my minimal acting skills would render me perfect to be Random Guy No. 4 in any sort of production. Alas, the studios we contacted were all too smart to put me in front of the camera. I must have a real face for radio, thus ending my road to the silver screen and delusional dreams of fame, grandeur and cocaine-infused Hollywood parties. You’ll have to put up with me in my articles, for now.

Instead, I toured the set of Utah Film Studios to check out the lights, camera and/or action. The studios are a digital technology firm that provides whatever a movie or TV series needs to be made. The production that the studio was hosting right now is a show called Yellowstone, which isn’t out yet. It will be on the upcoming Paramount Network on cable in the near future, so I can’t review the show or tell you if it’s “Netflix-and-chill”-able just yet. But it does star that guy Kevin Costner, who was a pretty decent Robin Hood back in the day.

The facility is really big, too—not as big as Yellowstone, because that would defy the laws of Hollywood magic. Utah Film Studios may rent out the place to multiple productions at a time, but the Yellowstone production is so big that it takes up the whole studio space. There are cameras everywhere, the wardrobe department is huge and so is pretty much everything else there.

The show’s publicist, Perri Eppie, explained to me that the show is based on the fictional, largest contiguous U.S. cattle ranch in Paradise Valley, Montana, near the area of, well, Yellowstone (a national park our President and Orrin Hatch have yet to fuck with. Too bad Old Faithful doesn’t spew oil, just hot water). Anyway, the ranchers are in constant conflict with an expanding town, an Indian reservation, land developers, energy speculators, assorted politicians and estranged family. It sounds like it could be like Breaking Bad with cow-tipping involved, and less meth. That is, unless the ranchers somehow end up in Utah County.

I thought it was strange that directors yell, “ACTION!” because there isn’t much actual action and everyone has to be reeeeeeeeeeally quiet. Walking around the studio is pretty cool. It was lunchtime for the crew when I was there, and one thing I noticed behind the scenes is the abundance of snacks. It’s like there’s a bunch of tiny 7-Elevens all over: candy, jerky, bottled water—no beer, though. If I was an actor, I would practice my acting skills in between scenes by pretending I was shoplifting. I wanted to inquire more about said snacks, but I was too scared to ask. But talk about living the good life—no wonder average joes want to be actors.

The green screens are huge! I keep thinking that in the future, Hollywood will start to fade out the whole acting profession and just CGI it all. The other cool thing the studio has going for itself is the attention to detail in the fake bedrooms. As you can see, I tested out the bed in one of them, and it felt real as fuck. The bathrooms even had working running water, which I imagine could be used for sexy shower scenes or possibly for actors who may actually need to use the bathroom if they can’t make it to their trailers.

Overall, I’m really hoping this Yellowstone show takes off—mainly so I can brag about being behind the scenes, if only briefly.

Editor’s note – Prior to publication, this piece has been updated to reflect the following against its print version: Park City Film Studios is now Utah Film Studios, the ranch in the TV series is in Paradise Valley and is fictional, and Utah Film Studios may rent space out to multiple projects at once.