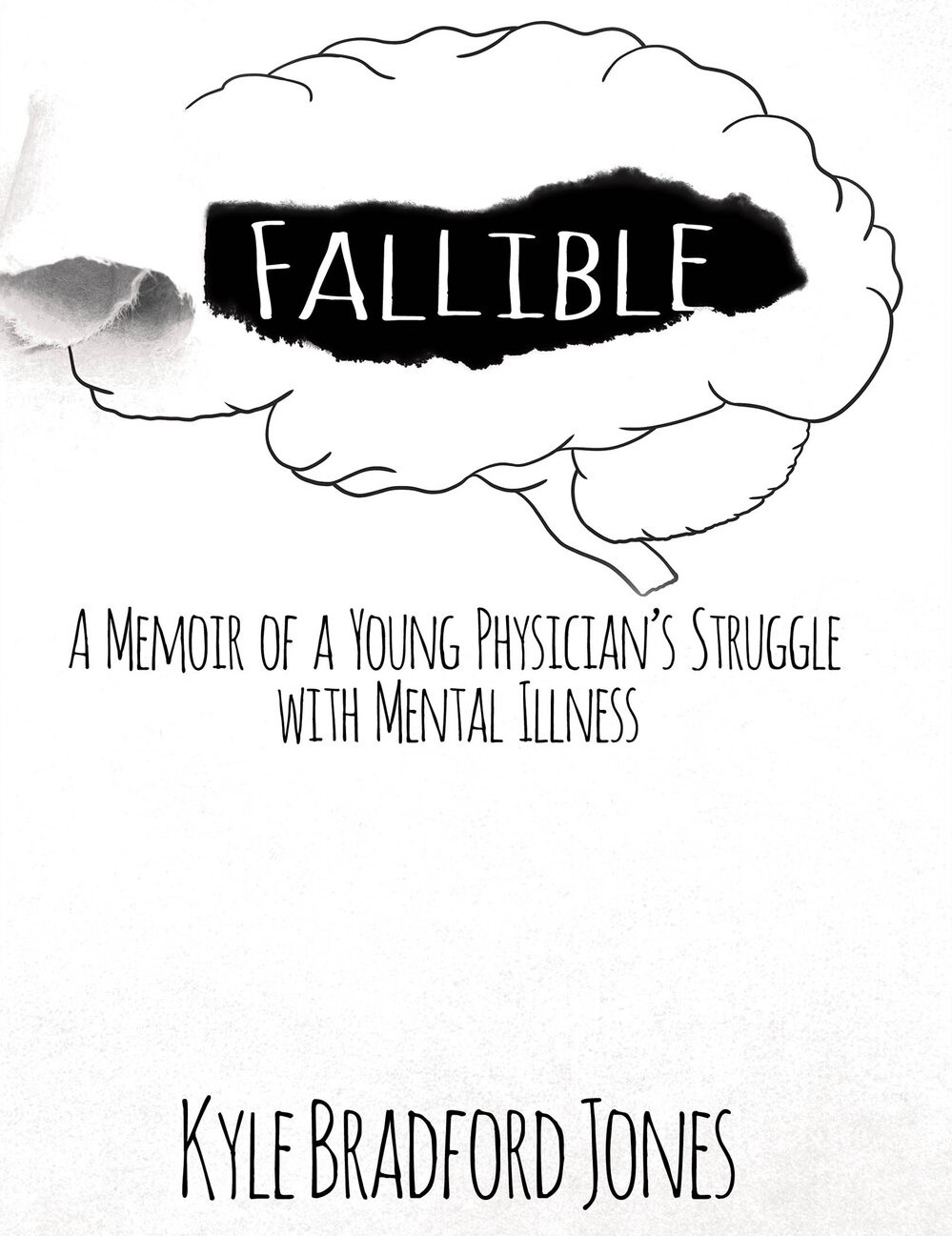 Fallible is a profoundly personal narrative on the ails of an industry and culture with respect to the experienced intersections of its author. Kyle Bradford Jones is a family-medicine physician currently in practice with the University of Utah medical system. Fallible is his first foray into memoir authorship and a strong opening act, especially for a writer washed in the intense academia of medicine. Bradford Jones takes readers through the circumstances of his personal and professional existence that led to a “creeping fear of everyday life” that pervaded all areas of his life. He also spends ample attention on larger systems’ analyses of the medical complex and the manners in which it falls profoundly short in the awareness of its effects on its people.

In the United States alone, one in five people will experience mental illness. This merely relates the gathered data points, saying nothing of the profound likelihood of underreporting that’s common with mental health stats. Furthermore, one in three physicians will suffer mental health issues, with three times higher overall suicide rates than the general population. Is it any wonder, when one’s work life is spattered with existential threat, loss and brutality on a fairly normal basis? Bradford Jones makes note of all such staggering statistics, the systemic failures and the underlying and deeply internalized pressure for professional caregivers to often place their own needs far behind those of their patients.

Fallible takes on a decidedly pro-mental healthcare stance, and thankfully so. Bradford Jones’ vulnerability regarding his own experiences with Major Depressive Disorder, Generalized Anxiety Disorder and PTSD makes the book much more warm and real. At times, his writing is digressive and overly clinical, at other times starkly descriptive (especially when describing the sickeningly hypnotic effluvia of hospital environs, for instance.) The sometimes dry and occasionally inconsistent tone of his prose is enlivened by his bold candor, from explicit and humorous vignettes of in-clinic penile palpation to exposing his own struggles with anger and his so-labeled “Superman Complex.”

One arena wherein some readers may struggle to connect with Bradford Jones is his abiding religious faith and experience. As an active member of the LDS church and father of four, Bradford Jones’ self-identifies as non-secular, something of a rarity in modern medical professionals overall, yet he holds it in ostensibly reasonable balance. He approaches the religion and mental health discussion with an appropriate recognition of social science and political perspective, including awareness that mental healthcare providers themselves are more likely to adhere to secular or atheistic identities overall. Inclusive of his religious affiliations, Bradford Jones’ lived experience feels fairly worldly and diverse, with an erudite and balanced eye, perhaps insofar as a privileged, white, male, cis, highly educated (likely upper-class) and Christian-identified person can strive to possess.

Fallible effectively attests that “the practice of medicine is anything but stabilizing” via its author’s handling of the personal and professional. Readers who themselves exist within certain worlds of high performance expectations, perfectionism and the ever-growing popular “hustle” culture may find this book salient and at times starkly upsetting, as it calls out the damages these mindsets can do over time. In a world where over-performance, burnout and “workaholism” are steadily becoming status symbols themselves, narratives such as Fallible are a needed smack in our figurative face.

Bradford Jones poses a concluding query of how we can better mind the mental wellbeing of those in professions where “failure” can, in any moment, be measured by death itself. He offers a solid list of notions on how the medical field can address the systemic ills its professionals suffer as his closing treatise, with a clarity of purpose that’s worthy of review especially by those in power to positively affect the functionality of said system. –Paige Zuckerman