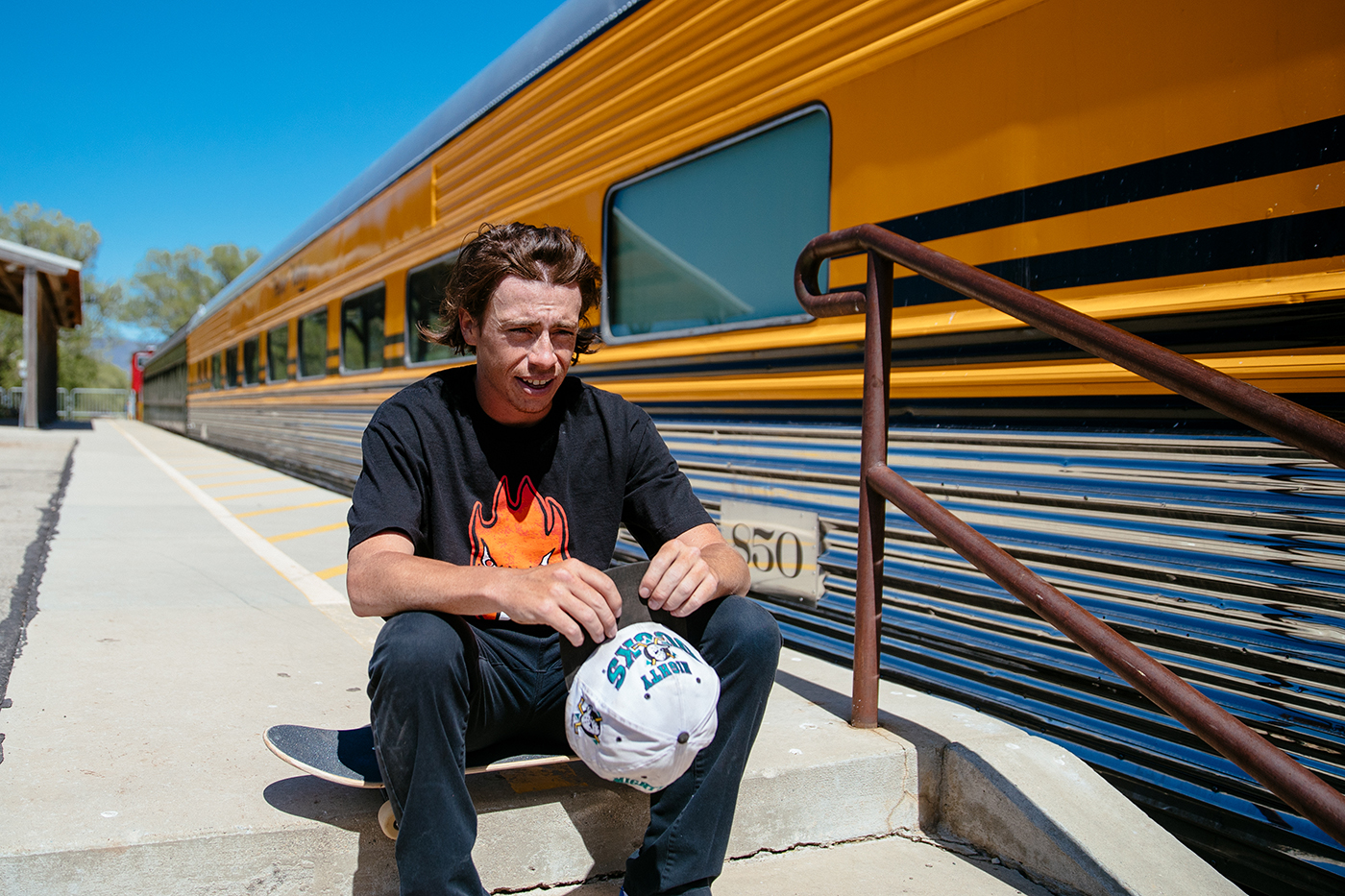 From the hills and countryside of Heber, Riley Winch has been living and skating in the small town that grows by the day. From the humble beginnings of wooden ramps and crumbling parking lots  to what is now a fully concrete skatepark in the heart of the city recreation area, Riley has seen his town progress, as has his skating. Small-town spots, tech innovation and a solid crew of close friends and family back him up in his pursuit of creative passion projects and further innovation on his skateboard.

Winch’s skateboarding interest was fueled heavily by his older brother, Brian Winch, and realizing the satisfaction that came from diving headfirst into skateboarding. As Riley says, “We used to do everything when we were kids—bike, rollerblade—and then probably around sixth grade is when I ditched everything else and it was all about skateboarding.”  While small towns can sometimes inhibit skateboarding opportunities, Heber provided enough for Winch and his friends growing up to keep the interest and progression going.

“… Around sixth grade is when I ditched everything else and it was all about skateboarding.”

“There used to be a little parking lot of wooden ramps that was donated from Park City, but the ground was so crunchy and tarred up,” Riley says. “Falling would just shred your skin.” Besides that, he references and reminisces about the old Wasatch High School as the “plaza” for him and his friends growing up, with everything from out-ledges and stairs to different manny-pads and technical spots. Unlike most small towns—through petitions and donations from a plethora of supporters, including the Tony Hawk Foundation—Heber and the people who were passionate about skateboarding were lucky enough to get a fully concrete park, which would become the spot for Riley and others coming up.

With a good crew of skaters to grow up with, Riley also found inspiration from some pros and videos of the early 2000s. “One day, randomly, my grandpa got me the Flip Sorry and Really Sorry [videos], and I watched those until they fell apart,” he says. “I loved guys like Mark Appleyard and Bastian Salabanzi, and the whole vibe those videos had. Those, Kids in Emerica and Baker 3 pretty much [encapsulated] what I thought skateboarding should be.” Riley also mentions Ishod Wair as being a big influence: “Anyone that can ride a skateboard that well and you can absolutely tell they are having the most fun all of the time, that’s what it’s really about.”

Riley’s skate crew varies from day to day, with Wasatch County Skate Park being the daily spot and then to the streets on the weekend. “I’m always down in Salt Lake on the weekends skating with NCP [Natural Cause Productions] guys,” Riley says. “We try to all get together and film at least one day a week. It’s hard to coordinate, but everyone has been getting clips.”

“If you have a spot and a trick, let’s get it going and see what happens.”

COVID-19 temporarily shut down skateparks in Utah for a bit, but Riley seems to have made the most of it during the shutdown. “My brother and I went in on a VX camera right when this started and got out filming by ourselves,” Riley says. “With everything shut down, there were some spots that we could finally hit where you wouldn’t get kicked out. I’ve also been messing around with this Super 8 camera lately, too.”

The Utah skate scene is a broad one, with talent ranging from Provo to Ogden and beyond with a lot of micro “scenes” within such large communities. As such, it’s sometimes tough to get well acquainted with skaters you see around a lot. “I’d really like to see more community-type events to just get everyone together,” Riley says, “more sessions with grilling, maybe get some raffles and just get everyone out. Things like the Adult ToyCC games of skate and the old SLUG and Roughside contests were always great.”

As far as the future goes, Riley has been filming for the next Natural Cause Productions video, set to be done this fall. Along with the video, he has some plans of his own to produce something relating to his hometown. “I’m working on a little part of all spots around [Heber] and some classic spots that we all grew up around.”

“I’d really like to see more community-type events to just get everyone together.”

Regarding his philosophy with filming and the difference in the park days with friends and the skate-mission days in the streets, “It all really just depends on the day and who is planning to do what,” Riley says. “If you have a spot and a trick, let’s get it going and see what happens. The dream would be to make a video with, like, everyone—the guys and girls you see around and don’t ‘know’ personally but that are always cool to everyone. It’s like, ‘Hey, get a clip and then put it all together,’ like a big culture video for Utah.”

After our interview, Riley and I rolled around Wasatch County Skate Park, and I was able to get a vibe for his style at his hometown park. For me, I was actually a complete fish out of water getting my legs under me while I watched Riley cruise and link trick to trick with maybe one or two pushes throughout the entire park. Riley has that real-deal, fun-loving attitude toward skating, and you can see it in his style and demeanor. He has the technical skills to flip in and out of ledges and the pop to get on top of and over rails and gaps. Riley also has a seamless way of linking his lines together. With a wallie off the side of a box or a big pop into transition, his ATV style carries him naturally on his board. Guys like him signify the current state of what I think is a positive point in the skate scene, being an absolute killer while smiling through the session.