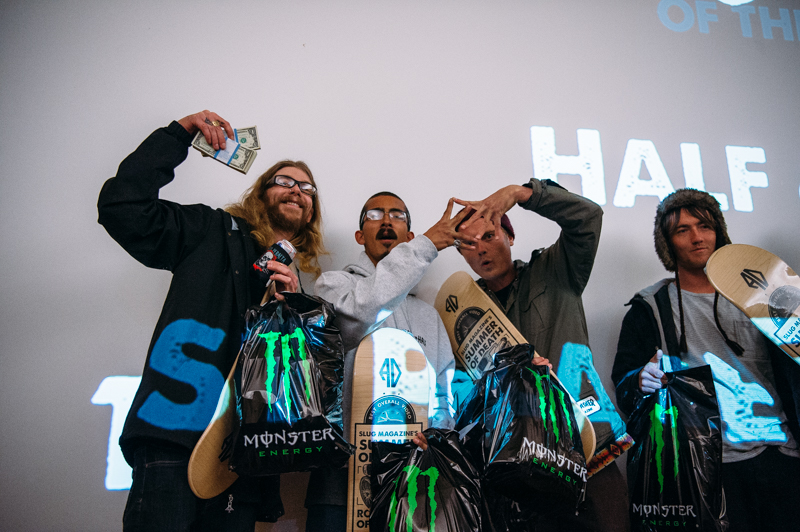 Team Half & Half took first place. Riders Jordan Vigil and Sam Hubble throw up the Sk8 Mafia sign alongside Nick Hubble and Half & Half shop owner Milton. Photo: Niels Jensen

Roughside of the Lens 2016 Film Premiere and Awards Ceremony

Folks gathered into the Post Theatre on Saturday, Nov. 19, to watch the epic Rough Side of the Lens premiere, an all-street competition that took place throughout Salt Lake City. The film was stacked full of talented skaters who put on for their city. In the theater room that night, people would raise their drinks and a holler at the screen, cheering for the homies and showing their respect for being so devoted to stomping their lines as properly and aggressively as was shown.

The team that took their seat at first place was team Half and Half. Representing Half and Half are skaters Jordan Vigil, Miles Vigil, Sam Hubble and Nick Hubble. Let’s not forget the dude himself, Milhouse, the owner of Half and Half Skateshop, who was also out there putting in work. Vigil not only earned first place but also some personal highlights as well. Sam Hubble walked away with some extra cash for receiving the Best Manual award and for displaying a solid heelflip manny to frontside boardslide on a handrail, and Vigil did the same when he nailed a 3 flip double set Downtown, and winning Best Flip Trick.

SSD took second place with riders Mike Zanelli, Gabe Segura, Izaak Cameron and Deng Tear on the team. Tear won Best Stair Gap after planting a backside sex change over a four block. The stair gap was undoubtedly phat, and because of Tear’s precision and aggressive style, the judges had to award Tear with the Best Trick of the competition.

The tie for third place was between team Flatspotter and AfterDark Skateboards. Flatspotter had skaters Lamar Rasmussen, Dustin Hill, Ashton Harris and Jacob Peterson. Squadded up on AfterDark was Sean Hadley, Isaiah Beh, Erik Jensen and Eric Ferguson. Ferguson also played a key role in the competition, helping edit the footage that he put on the big screen. Big ups to his hard work and dedication and for making the film as badass as it is! After the skaters and the teams were awarded their prizes, AfterDark Skateboards premiered one of their newest films as well. It was back-to-back, rad skateboarding on the big screen — that’s for sure.

Special thanks to our awesome judges for the competition! Benny Pelligrio (Milosport), Pro Skater Adam Dyer, Andy Pitts (Graphic Design Deluxe) and Jake Smith (Volcom) are awesome. Respect to everyone who participated in this year’s Rough Side of the Lens contest! Way to throw it down for Salt Lake City — all of you killed it, especially the dude Cody Slade in the rollerblades. To everyone who showed up to watch the contest via projector screen, thank you for being such bitchin’ people who know to have a good time and making the overall vibe as dope as it was.

SLUG would also like to thank the awesome sponsors who were the backbone for this competition: Monster Energy, Rough Neck, Half and Half Skateshop, Graywhale, SAGA, Blueplate, Milosport, AfterDark Skateboards and Porcupine. –Zach Lambros

See below for the full Roughside edit, a photo recap from the premiere by Niels Jensen, winners, team rosters and individual parts.

“Noose For A Halo”
Performed by: Pentagraham Crackers