Whether you’ll admit it or not, you’ve walked the city wondering why giant robots aren’t pouring out of alleyways battling to save the galaxy. Sumo Bots at Craft Lake City DIY Festival are giving you the opportunity to witness this on the miniature scale. Contestants who have constructed their own miniature monsters will drop them in a ring with the goal of pushing the enemy out of the circle, for all of the cyber glory this city has to offer. 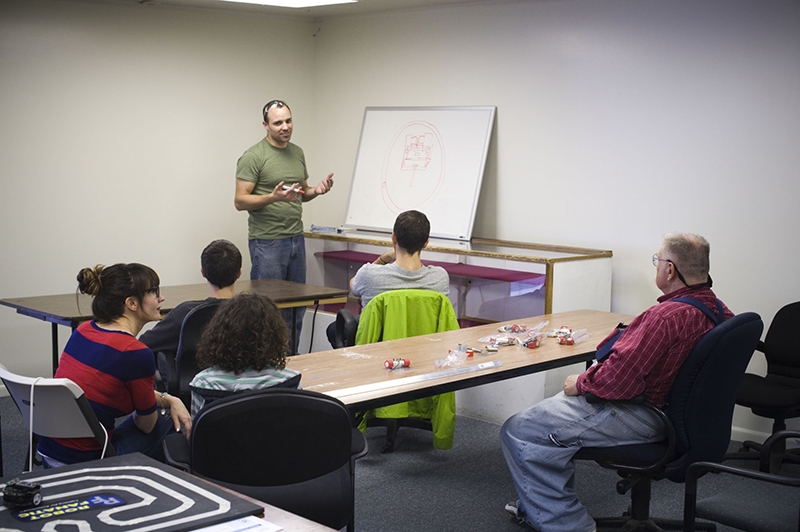 EnjiGo’s resident Robot Fanatic, Michael Anderson, began leading a class in July for students of all engineering skill levels, instructing them how to build their own Sumo Bots with an inexpensive materials package. Photo: Russel Daniels

Whether you’ll admit it or not, you’ve walked the city wondering why giant robots aren’t pouring out of alleyways battling to save the galaxy. Sumo Bots at Craft Lake City DIY Festival are giving you the opportunity to witness this on the miniature scale. Contestants who have constructed their own miniature monsters will drop them in a ring with the goal of pushing the enemy out of the circle, for all of the cyber glory this city has to offer. Michael Anderson of Robot Fanatics is the man behind bringing this movement to light.

As I walk into the front office of EnjiGo, preparations for their new setup are clearly under way. In a storefront under construction, there is a bright-red, humanoid robot on a shelf waiting to greet me. Next to the desk, there is an empty display case and a paper sign taped to a chair that reads, “EnjiGo this way.” Heading into the back office, I am introduced to an entirely different feel. Once you make your way past a jukebox (that could only have been taken from a 1950s diner) and around the pool table, you find out where the real work gets done. Shelves full of tools and parts surround work benches lined with various projects. Three men are talking in the back while they unload a truck into the shop. Among them, I find Anderson excitedly discussing what it will take to create more  “hack spaces” in Salt Lake. Anderson has also been heavily involved in MakeSLC since its beginning, initially starting as a community endeavor to get creative minds unified. In a warehouse, they have since mutated into EnjiGo and moved into their new shop in South Salt Lake. Hack spaces like EnjiGo are prevalent outside of Utah: “You can find one in every city in the larger areas,” Anderson says. “Silicon Valley has them everywhere—Utah is a new opportunity.” Out of hack spaces, new ideas, technology and business can emerge. The sense of community also gives people a creative sounding board when up against difficult problems with their projects. You can see his surprise at the amount of energy around Robot Fanatics: “It’s grown faster than I imagined,” he says. “Since August, we’ve already reached 35 members.”
When all is done, Robot Fanatics will have a full-service shop where enthusiasts can find a place for discussion, advice and part kits to build their mechanical dream. “We should have the retail shop up by the end of August. Our goal is to provide the excitement and environment that RadioShack doesn’t,” says Anderson.
Anderson’s fascination with robots began in the ’90s after reading an article in Popular Science. He says, “I watched a lot of Robot Wars, and eventually attended Robowars in California. They had some crazy stuff. It would take a lot to bring that to Salt Lake—I remember one giant chainsaw-like robot had its cutting arm fly off, and it pierced the two-inch Plexiglas.” Anderson’s hobby snowballed into a workspace, club and now, the passion to teach others to construct. Though he may not be Rock ’Em Sock ’Em’s biggest fan, he is quite the PC gamer, or was until he began the search for making robotics easier for the public. In his search, he has developed a circuit board and parts kit that can be assembled in four to five classes. The first series of these classes is just wrapping up and more will definitely follow. “We’ll be programming the robots using Arduino. It has basic commands we’ll be providing, and you can, of course, take it further with enough research.” With his background in software development, Anderson can lead someone of any skill level into programming his or her bot for basic behaviors. Once the robots are completed in the inaugural class series, the students have the opportunity to enter them into the Saturday Sumo Bot competition at CLC DIY Fest happening Aug. 9 and 10. The robots in question will have the ability to sense an object in front of it, and then push with all the power they can muster. Anderson describes the Sumo Bots’ abilities, saying, “You’ll want them as low to the ground as you can go, so they don’t tip over during the fight. They’re powered by this little motor and two wheels, and they’ll move in a straight line to push out their opponents.” Among other Sumo Bot competition applicants, should anyone’s bot have the power to push all other’s from the ring, the creator will be heralded as the CLC DIY Fest Sumo Bot champion, a title which is sure
to attract hordes of the opposite sex to their metallurgic prowess.
If you wish to become a more in-depth participant at EnjiGo, you can become a member for $50 a month. Benefits include: access to the facility, tools, classes and a workspace for various projects, which also allots free entry to any classes at their campus. Check out Sumo Bots at the CLC DIY Fest and be sure to have a discussion with the folks from Robot Fanatics—you’ll find yourself in good company and witnessing the beginning of something incredible.
Check out EnjiGo at enjigo.com for information on future classes and membership, and Robot Fanatic at robotfanatic.com for information on how to make your own robots. The Sumo Bot competition will be held 10 a.m.–4 p.m. on Sat., Aug. 10 in the Science & Technology building on 200 S. at the Gallivan Center.
Photos: