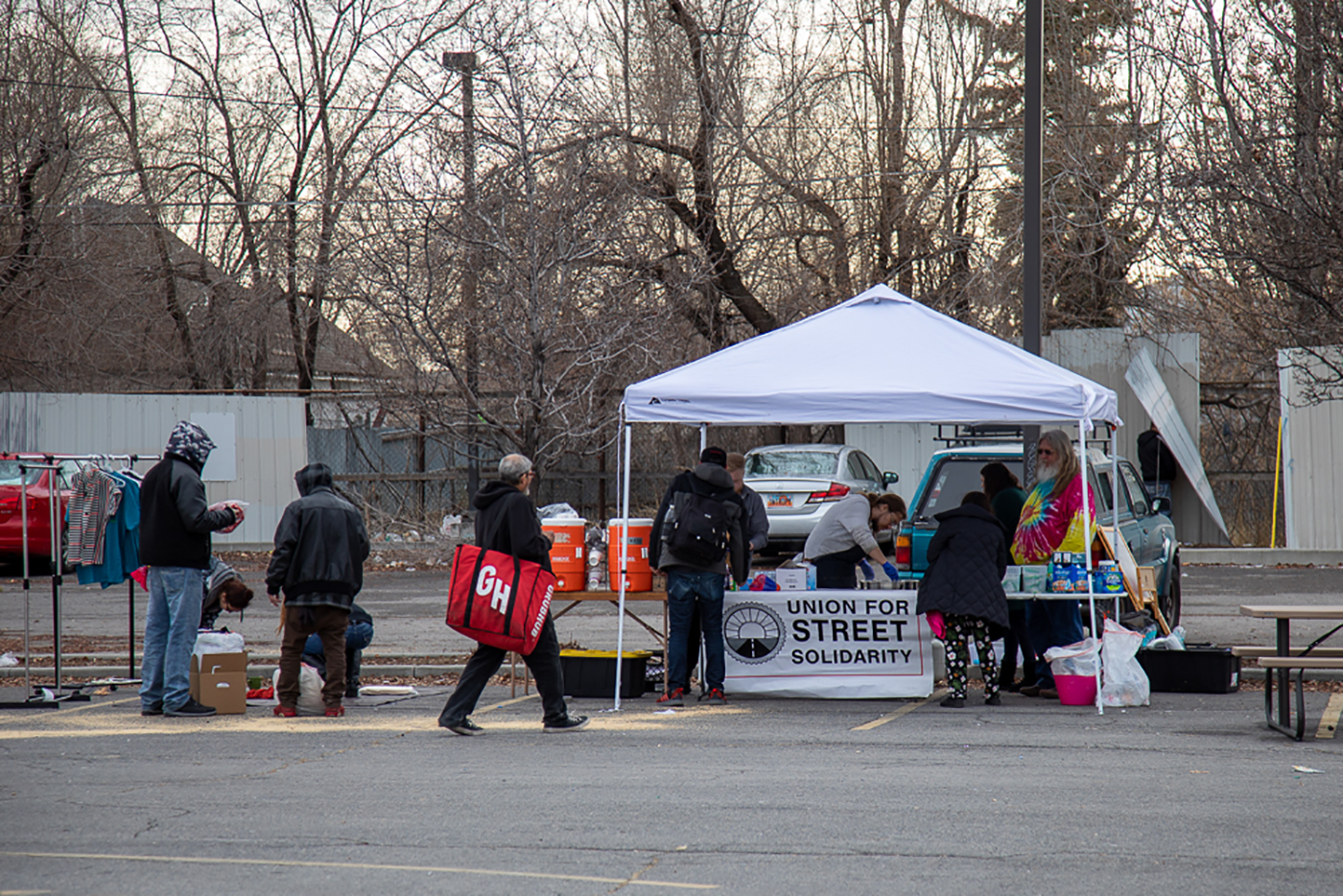 The Union for Street Solidarity: Compassion for fellow Salt Lakers

Salt Lake City’s housing crisis has been an issue fraught with controversy since long before the rise in tension between city officials, police and individuals seeking shelter in camps in Washington Square in past months. We’ve seen numerous studies—and numerous efforts, including Operation Rio Grande, the closure of the The Road Home, and the opening of three new regional shelters in just the past few years alone. Although, the problems that plague people needing to seek a respite from the elements persist. We are one shelter short of what was proposed and hundreds of beds short, all while the building that formerly housed the Road Home sits vacant. People in tents and makeshift shelters line several Downtown streets, looking for a break from the snow and cold with no clear place to go. Our new mayor has pledged to find additional space and temporary housing to help, but for those sleeping outside tonight (currently 26 degrees as I write this), their plight is most urgent.

The Union for Street Solidarity (USS), a small but growing group of concerned individuals, has been working to aid those in need through their own direct actions. USS serves food, gives out clothes and blankets, and provides a sense of community to those who are perceived to have none. While new housing plans are proposed, there is still an immediate need for blankets, food and other resources, which is where USS has decided to step in to help fill the gaps by providing weekly distributions of food and support.

The USS provides a sense of community during Salt Lake City’s housing crisis.

Rory Tarics, Summer Smith, Andrew Noyes and Matt Monahan are a few of the volunteers who have made the ongoing commitment to pick up where they feel the city and state have fallen short. USS is a socialist group, and they aim not only to provide resources to those in crisis, but to help foster a greater sense of empowerment and community for those they serve through direct action.

Tarics says, “Direct action is the point at which theory becomes reality. We find out whether or not our ideas are worth anything. There’s so much time-wasting to be done waiting for someone else to do something, and that’s never kept anyone warm or fed. Any effort is better than no effort, and organized effort is better than undirected effort. What better way to both address and understand a problem than by simply getting out there?”

USS is not an organization or a nonprofit. They’ve intentionally avoided any type of “official” status. They are a concerned group hoping to help where they can. They are neighbors being neighborly. Tarics explains that the “USS believes that mutual aid is a particularly effective form of praxis,” he says. “Humans have always taken care of each other. We form societies because it’s impossible for anyone to do much more than survive on their own. There’s an innate drive to combine our strengths and compensate for each other’s weaknesses. Socialists value this, and we know that bringing people together is the only way we’re going to create a better world.”

Their approach is collaborative and inclusive in that they not only partner with other groups such as the Utah Syringe Exchange and the Take Shelter Coalition, but they are partnered with the individuals they serve. Smith says, “It’s not just us serving them. We get out and talk and just listen. No one ever does that.”

“Direct action is the point at which theory becomes reality. We find out whether or not our ideas are worth anything.”

USS seeks to better understand the needs and individuals through conversation, surveys, and personal stories. A newer initiative, Street Stories, a one page newsletter where USS shares how people have responded to specific questions or prompts, has been an effort to give the people they support a sounding board to talk about what is most important to them while helping USS better inform the public at large who these individuals are and where they are from. Tarics says, “Street Stories, has given us the chance to guide conversation towards specific issues and then share the things we learn. We use Street Stories as a conversation starter as well, through which we can distill the knowledge shared and apply theory to the real things people experience.”

A key component of their support is establishing trust and safety, and Street Stories has played an important role in helping to establish that kind of community. Monahan, one of the longest active in the group says, “I think that is actually our most important step in amplifying their voice so they feel some solidarity with their own community. We also try to maintain a safe space when we’re distributing, and lots of people have said that is one the things that has helped them to trust us.”

The group was surprised that SLUG reached out to them and were curious how we even caught wind of their activities—speaking to their genuine drive to do good. They aren’t seeking attention or photo ops but want to make earnest connections and a stronger healthier community for all of us living here. Throughout the interview, the group referred to the people they serve as houseless or people without houses instead of homeless. Smith explained this as a way to keep the people at the forefront of what they do and to define them less by their housing situation. People are the focus, and as Andrew Noyes says, “A lot of people consider Salt Lake their home, even if they don’t have a house.”

You can find more information about the Union for Street Solidarity, how you can volunteer to help distribute goods, make a donation, or find the latest issue of Street Stories at streetsolidarity.com.