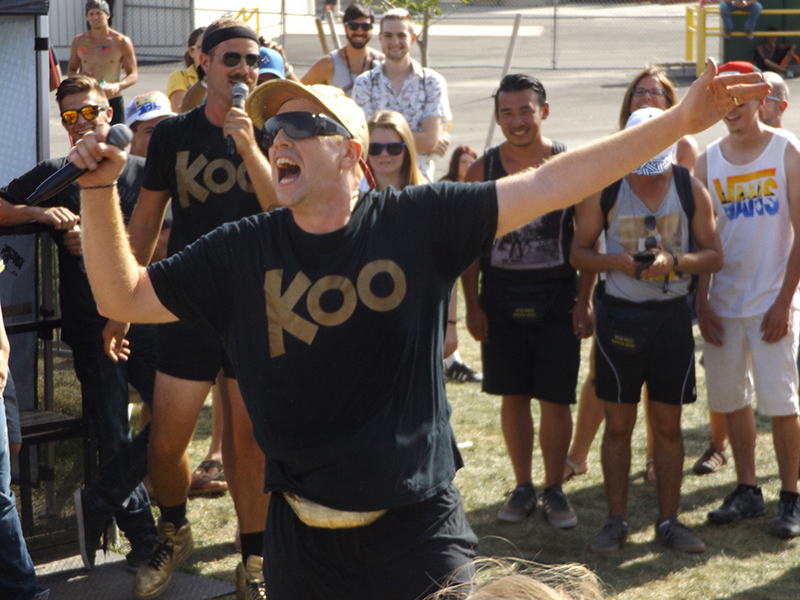 With this adventure to Warped Tour 2015 with my now 16-year-old daughter, I got to see the tour through her eyes and, in a lot of ways, understand the music and bands a bit through her ears. It helped me drop my cynicism—and also understand my kiddo a bit better.

First up on the slew of bands for the day was Senses Fail. During their set, the vocalist put out a good amount of energy, making them entertaining to watch, but the post-hardcore style and serious nature to start the day was kind of a downer. My very girl power–oriented daughter even griped a bit about a tirade the vocalist went on about a guy he saw in a “Meninist” shirt and how offensive it was to him.

Some of the bands we wandered to just out of curiosity or convenience, so a good part of the day was like a smorgasbord, just taking samples of bands’ sets, checking out a song or two, like Boston emo band Transit, who could put you to sleep easily. blessthefall had the crowd all rowdy and pumped moshing, but still, the feeling of the day was in the form of downer or overly serious music.

About midday came the main event, the band my kiddo wanted to see the most: pop punk band Set it Off. Right out of the gates, I see why she likes them, and I think her getting to see them live just ingrained that affection for the band for her further. Singer Cody Carson got the audience participation up huge, often hopping to the barricade to get close to the fans. At one point, he stood on the hands of his fans then did the brief crowd surf thing. This was easily the most energetic performance, but more importantly, it was endearing—the band loves their music and playing it live. Set it Off are definitely “Dad approved.”

For most of the afternoon, it was the really bad shows—Icon For Hire played bland, female-fronted rock/punk. The UK’s As It Is showed how a decent pop punk band can be ruined by vocals that sound like they’re sung by a 12-year-old boy that can’t sing. Black Veil Brides had girls screaming with them. I still don’t know what audience they appeal to and why the girls scream for them. They dress a bit glam/goth but play, well, crappy rock music. The brighter spot of the late afternoon came from the Welsh band Neck Deep, who delivered some pop punk to an appeased and fun crowd.

Last year, Teenage Bottlerocket stole Warped Tour for me. This year, in the most unexpected way—because at my request, I wanted to go see Waka Flocka Flame because the hip-hop artist was doing something extremely different for the tour—we ventured to their stage very early, catching Minneapolis-based dance party music duo Koo Koo Kangaroo. We arrived to see two guys in short shorts with gold fanny packs dancing and singing to pretty goofy electronic music and were immediately engaged and laughing. Singing songs like “No Crust,” “Everybody Poops,” “Fanny Pack” etc, the crowd participation was at maximum. The duo got into the crowd, got everyone dancing, and then invited the folks that had fanny packs onstage to dance with them. It’s goofy and silly, but they played a hugely fun set. It was the most fun I had all day, just seeing everyone smiling and laughing, in a day of mostly forced serious emotion or just dull tones.

To end our long day in the sun, we watched a bit of Waka Flocka Flame, who packed a huge and enthusiastic crowd. I’m not the biggest fan of hip-hop, but damn, he had his fans and the crowd, going and he was busting with energy. The last band of the day, Pierce the Veil, was an example of how musical tastes change. Last year, my daughter would have been extremely excited to see Pierce the Veil. This year, my daughter just seemed to go because it was there and it was a good way to close the day. The experience of it all again—the fun I had—was just being at the tour with my daughter and her help of just letting me to put my own personal taste aside for at least a day and experience something through the eyes and ears of a teenager. Strangely, though, I think I walked away with more energy left than my much younger daughter. I guess she should eat more veggies and less simple carbs. –Bryer Wharton