After seeing mass amounts of hype on social media and music blogs about how the Aokify America Tour was thrilling concert-goers around the country, I was excited to see a highly-interactive, party-oriented show last night when the mixed bag of artists took their tour to The Complex. 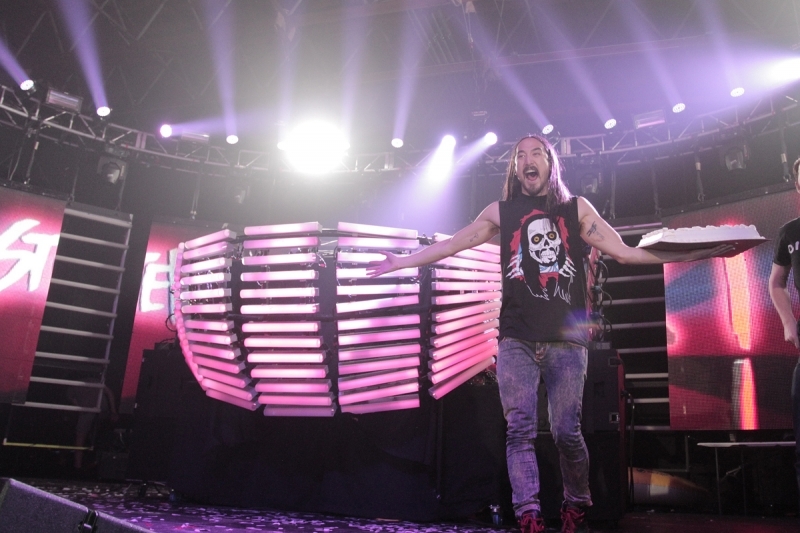 After seeing mass amounts of hype on social media and music blogs about how the Aokify America Tour was thrilling concert-goers around the country, I was excited to see a highly-interactive, party-oriented show last night when the mixed bag of artists took their tour to The Complex.

I arrived at the venue just as Atlanta-based rapper Waka Flocka Flame was getting the all-ages crowd going for the next performer, Borgore. While I’m not the biggest fan of Waka’s high-energy music with little-to-no meaning lyrics, I recognized a few of the songs in his set, which included his hit “No Hands,” as well as the new track “Wild Out” featured on Borgore’s latest EP of the same name. The gigantic (literally, do you know how tall he is?) rapper bounced back and forth onstage doing that signature rapper move (you know, microphone in one hand, lean forward, swat the air with your other hand) while the tweens bounced wildly.

Next on the bill was Israeli producer Borgore, whom SLUG had interviewed last weekend regarding the Aokify tour and his Wild Out EP (Dim Mak), which is out now. The booth was set up in front of a semi-circle wall of LED screens that would later project pictures of naked women, cats and various other things popular on the Internet⎯complete with two stripper poles set on each side of the DJ booth. The DJ opened his set with a heavy-metal influenced dubstep track before going on to play a couple of songs from Wild Out as well as some of his other tracks, like “Nympho” and “Legend.” Borgore didn’t play more than a minute of each song and his club mix may have been popular in the crowd full of high school aged kids, but wasn’t pleasing anyone over the age of 18 that was raised with any type of morals. Maybe I’m just being a bitter feminist, but there’s something extremely unattractive about a guy screaming, “Suck it bitch!” among other profanities I wouldn’t quote professionally before commanding every girl in the crowd to “twerk real hard!” while two strippers flip upside-down on their poles. Borgore closed the set with his hit single “Decisions,” that featured vocals by Miley Cyrus, and finished the song by singing the chorus off-key and walking offstage.

The closing act for the night was Steve Aoki, who took the stage after the LED screens behind the DJ booth projected a countdown that flashed the words “Aoki” in neon. Entering the stage in a NeonFuture Technology (a product Aoki coined specifically for the tour, which he talks about in his interview with SLUG last month) vest and his signature hairstyle, the LA-born DJ opened the set with “Boneless,” the same song he used to open his set at the mainstage during this year’s Tomorrowland Festival in Belgium. “This is my new song with Afrojack,” Aoki screamed to the now older crowd before dropping the unreleased track, “Afroki,” an uptempo dance track that captures an electro-house style with an added touch from Aoki. Next, Aoki played some songs from his most current album, Wonderland. Just as the chorus of Ladi Dadi began, two Kryomen took the stage and shot air cannons from their hands as the crowd went wild for the 10-foot tall robots that matched Aoki’s NeonFuture stage before Aoki dropped the song straight into a remix of Tommy Trash’s “Reload.” After that, the crowd went wild as Aoki jumped off the top of the DJ booth, cake in hand, while the beat of “Aoki Jump,” his collaboration with R3hab, played in the background. The majority of his set was his most current and even unreleased music, which was refreshing because no one else is dropping it in their sets that I’ve heard recently. “This is my brand new song with Flux Pavilion, it’s called ‘Steve French,’” the DJ said before playing the unreleased song and bringing members of the GA crowd onstage to dance. Shortly after the crowd members left the stage, Aoki brought out two large, inflatable river rafts and threw them into the crowd to play with. How do you get a bunch of ravers all worked up? Give them toys. Which is exactly what Aoki did over and over.

Aoki closed the set with some of his older, most popular dance tracks, including his remix of Kid Cudi’s “Pursuit Of Happiness” that was created for the Project X movie soundtrack, as well as other crowd favorites like “Turbulence” and “Beat Down.”

Because the show competed with Morgan Page, who Park City Live brought the same night, I heard a lot of people comparing the two concerts because they’re both EDM artists. Absolutely, I’m sure Morgan Page was a good show, but Aoki is more of a novelty performer and gives one of the better novelty EDM performances out there. On that note, when is someone bringing Major Lazer to Salt Lake?

Check out more photos of the show by Austin Boyd here.