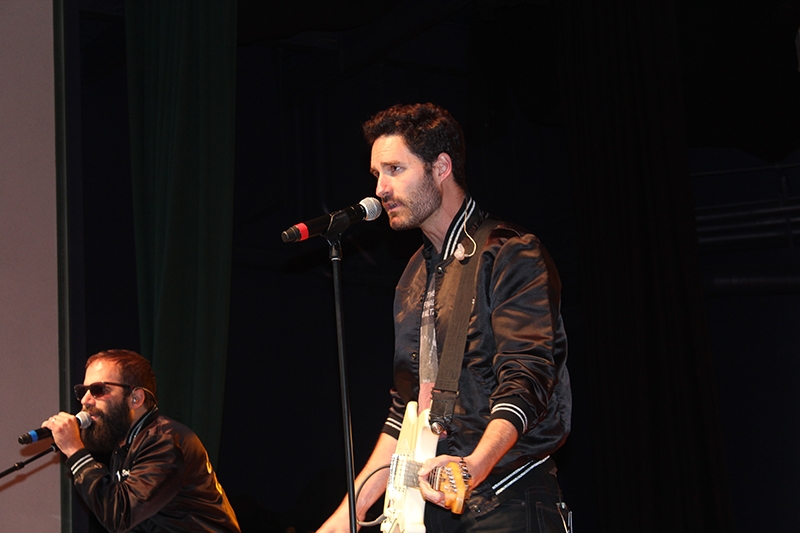 Capital Cities and their most dedicated fans braved the deluge at this year’s Big Ass Show. Photo: Blake Leszczynski

It was a mere 20 minutes into the show, and my sock was already wet. For some reason it was only my right sock, (a situation I could live with), which meant that there was a major structural flaw in my right shoe. Still, as long as my left foot stayed dry, I could see no reason as to why I could not enjoy the show.

The 19th edition of X96’s Big Ass Show will unfortunately be remembered as much for the unending deluge as it will for the atmosphere and music. As unfair as that may be, a good portion of the show’s attendees were as interested in finding shelter a good portion of the time as they were in finding a good place to see the next act; the latter being a much easier task, as I imagine that only a fraction of the expected attendees actually showed up.

The first few hours weren’t actually too bad. The rain was very light, the crowd was lively, and the acts were memorable. I arrived midway through local synthpop band, Ocean Commotion’s set and was impressed, right away, with their energy and stage presence. These five young men, based in Salt Lake City, already had the audience moving with their Passion Pit-esque sound and performance.

The next band, The Departure, had a similar performance to their predecessors. Not that the music was similar, being that you are more likely to mosh rather than dance at their set, but the energy was the same. I think, at this point, people were just glad that, despite the weather reports saying 100% chance of rain, things at this point weren’t so bad.

By the time The Eeries started playing, the rain had started in earnest. These guys, and the crowd, didn’t let it bother them a bit. The four piece rock group is a throwback to ‘90s alternative which really resonated with some of the, let’s say, more experienced attendees (like myself). Their sound and demeanor could easily be compared to that of the Pixies or even some of The Smashing Pumpkins’ more straightforward selections. By the time they started into their hit song “Cool Kid” I was a fan—that particular song, and really the whole performance, was easily one of the highlights of the day.

At this point, the rain became a real problem. People were running around trying to find cover to eat their slices of pizza and protect their beer. My other sock (as well as every other square inch of me) was drenched. It was about this time it started to get cold as well. I knew it was only a matter of time before I would be retreating to my car. But I pressed on, mostly because my two most anticipated acts— Broods and Phantogram—were just on the horizon.

The first time I heard Broods, it was on my Chvrches Pandora station. It was their hauntingly beautiful “Bridges,” and I was in love right away. Their performance made me love them even more. First of all, vocalist Georgia Nott is perfect. Her voice not only matches album quality, but adds a touch of soul that the records may have missed. The brother/sister electro-pop duo from New Zealand impressed the crowd, as they went through songs from their upcoming album Evergreen.

Phantogram was next, and they absolutely killed it. The group from Greenwich, New York flawlessly moved from gem to gem mostly from their Voices album released in February of this year. Sarah Barthel, the raven haired singer for Phantogram stole the show, especially with her breathless refrain in the band’s perfect hit “Fall in Love.” At this point, the rain had turned into an absolute deluge. But people were more or less ignoring it because of how great the show was. Phantogram ended their perfect set with “Black Out Days,” and the crowd again fled to cover.

By the time Capital Cities hit the stage, I was thinking of every reason to justify leaving. I was soaked head to toe and starting to shiver and still looking at a long drive back to Provo. Midway through their set I headed toward the exit, leaving the rest of what was a great performance from Capital Cities, not to mention A Day to Remember and Neon Trees, one of my very favorite live bands, on the table. Much respect to the folks who stayed the whole time—I’m not proud of folding.