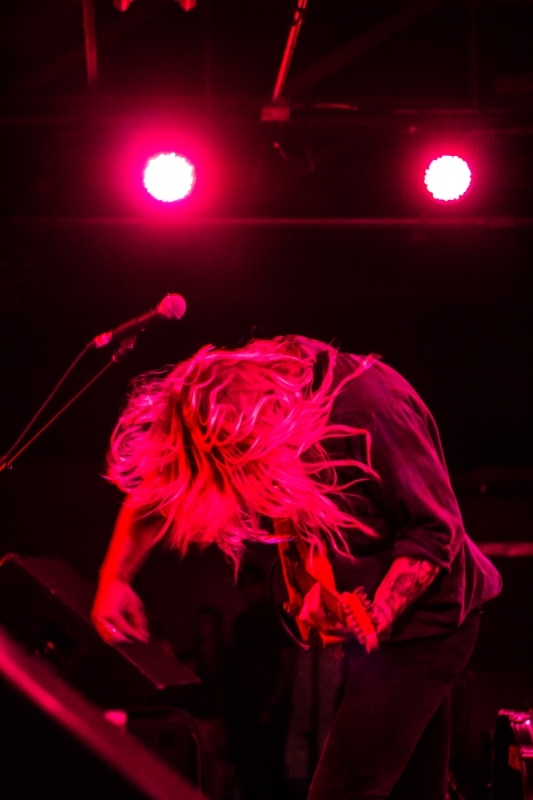 Getting into tonight’s gig required patience, a bit of faith and some luck. I was not entirely familiar with Allah-Las prior to tonight. However, the combination of the poster promoting the gig and a friend’s recommendation peaked my interest, enough so that any and all bullshit would be dealt with to get in. After negotiating my way past certain obstacles I followed the psych-garage tunes being blasted out by Super 78 into the main room. Having seen these guys before I expected a solid performance and my expectations were exceeded. Their presence on stage projected a certain confidence that reflected an irrefutable command over their audience. Offering a certain intensity combined with their cool demeanor.

The only theatrics are the colored lights flaring and flickering over the audience. Red and blue glow off and on making the garage psychedelic ambiance complete, allowing me to feel like I’m going down the rock n’ roll rabbit hole with the help of three prominent guitars. This whole experience is no doubt helped along by the dive-like atmosphere this place offers—it’s a perfect place for this kind of rock n’ roll. After a noticeable pause, ‎vocalist Cesar A. Reyes announces their last song, a cover of the Brian Jones Town Massacre’s “Feel It,” a number I have grown accustomed to thanks to Super 78.

After a brief moment outside, I am lured in by the wail from Pest Rulz. Elbowing my way to a vantage point, I can see that the contrast between the two local groups is striking. Super 78’s presence on stage was cool and composed. Pest Rulz, on the other hand, was wild and unpredictable, blasting out a barrage of garage styled rock n’ roll. Each number that is played is both wild and intense. Unfortunately, they are plagued with constant breaks. It doesn’t help that some of this break time is reserved to promote another gig later on. Overall, their performance is exciting, but lacked the ability to get me hooked.

The opening acts sets seemed to be shorter than usual. But by the time Allah-Las began to set up their gear, this did not appear to be an issue for those in attendance. The headliners popularity is more than apparent as there was a still a long line out the door. Young and perhaps more mature, hip types continued to file in and contribute to the already large crowd. It looks as though rock n’ roll is cool again. This seems evident from fashionable style of the audience. These modish looks cannot help but make me wonder if someone went to Urban Outfitters.

Allah-Las’s presence on stage invokes unanimous cheers from the assembled onlookers. Wasting little time, they launch into a first of many surf garage rock sounding numbers. They produce an aura that is calm and cool, giving their demeanor a sort of relaxed but charismatic feel. Their style incorporates a very vintage sound with clear influences of ‘60s rock n’ roll combined with the strong elements of psych-garage rock. They remind me a bit of The Black Lips meets The Animals with a little Bob Dylan on the side, when they play upbeat tunes like “Sacred Sands,” to which the crowd really begins to bounce and sway about.

The consistency of their act is noticeable. The energy produced is always on point and is never allowed to lag. Allowing the listener to stay hooked from start to finish. This is something that inspires a special kind of appreciation, to which the audience definitely shows after each song. Even their somewhat softer numbers keep me on the edge of my seat. It gives me feeling like I’m on a Dr. Feel-good kind of ride. This sensation is continuously perpetuated by Allah-Las’s unique rock n’ roll style. Something I am quickly growing fond of.

Their conclusion is met is cheers from spectators who remain enthusiastic even after the band takes their leave of the stage. The crowd doesn’t budge and shouts for “one more song” echo throughout the room. Strangely, the members of Allah-Las do not return to play. This absence prompts some confusion added with a little agitation from the assembled and unmoving mass of fans. Some individuals even take to messing with the microphones on stage. This only stops when those messing about are threatened with immediate expulsion from the venue.

Allah-Las played a solid set, and it is understandable why one would expect the custom encore from the headliner. Especially if the audience is as devoted as they are. Some might say that the customary encore is a cliché that is no longer relevant. Even though there was not one, their performance did leave me with the feeling of satisfaction. However the bewildered nature of the crowd suggests that they expected and wanted more. I empathize with them, for I know I did as well.