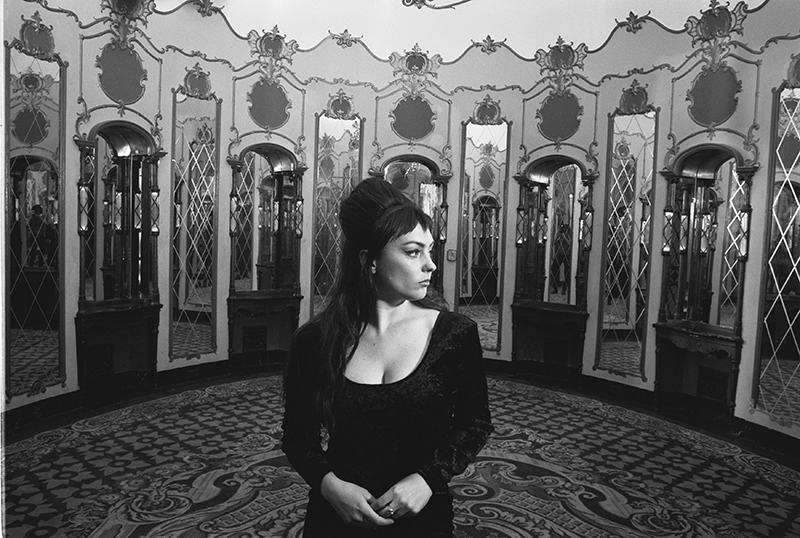 I really love when an opening act, particularly one I’m not familiar with, plays so well that I dig into their music on the way home. Let’s face it—a lot of times the opener isn’t great. They’re there to fill an hour and keep ticket holders placated, but they aren’t who we pay to watch. I’ve seen a lot of bands open a show to a “meh” reaction. I’ve witnessed crowds talk so loudly during an opening act that the artists could hardly be heard. But on Friday night at The Depot, Laetitia Tamko, who goes by the stage name Vagabon, was not one of those acts—no way.

I heard a track a while back belonging to the Cameroon-born, New York–based, multi-instrumentalist, but it hadn’t stuck in my mind. Seeing Vagabon live changed that pretty quickly. I was taken aback by the power of Tamko’s presence combined with her booming yet soothing voice. There were other musicians on stage, but one couldn’t help focusing on her. It’s like all of the Velvet Underground tracks with Nico—I often forget that Lou Reed and John Cale are even in the band. Vagabon is great and unique, with two albums released and a sound that is difficult to pin down. I definitely recommend checking her out when the opportunity presents itself.

“I believe there were seven songs from All Mirrors featured before she played anything older than that, which is well over half the songs on the album. I’m not complaining and neither were her fans.”

I was excited to see Angel Olsen, as I hadn’t had the chance before. I also had been beaten to the punch in regard to reviewing her last two releases, this year’s All Mirrors and 2017’s Phases. Those albums would have been great to analyze. The former is one of my faves from 2019, but I’d take the opportunity to see a live show any day. And, man, this show also landed on my shortlist for best of the year.

Olsen’s latest album was released in early October—only two months ago—so there was no surprise that her setlist would heavily pull from this project. What was surprising was how all of the audience members were singing along to almost every one of the new songs as though they had known them for years. I feel that an appreciative audience can enhance the experience for others, and the group at The Depot knew their Olsen tracks and were enchanted by her every word.

She began her time on stage with “New Love Cassette,” a great track and one the crowd was happy to start their experience with. Olsen’s ensemble included strings, keys, bass, guitar and drums played brilliantly, and I especially loved the violin and cello. Anytime an artist can layer their music with adeptly played, beautiful instruments (especially live), I am impressed and happy. Olsen’s second song was the title track from the new album. It was also released as the single months prior, so almost everyone there knew it. She snuck “Spring” into the setlist before people could calm themselves down, keeping that three-track intro that a lot of shows begin with.

“And, man, this show also landed on my shortlist for best of the year.”

From there, Olsen switched from guitar to keys and the lights became ominous for a really heavy, spaced-out rendition of “Impasse.” The crowd rocked and swayed, as though under a spell. I believe there were seven songs from All Mirrors featured before she played anything older than that, which is well over half the songs on the album. I’m not complaining and neither were her fans. She rounded out the barrage of new songs with “Lark,” “Summer” and “Tonight”—all good, and all welcomed.

Olsen dove into material from some of her other releases about halfway through the set. She started the older tracks with “Special,” from 2017’s Phases, a compilation album of early, previously unreleased tracks and recordings that ended up on the cutting room floor during the sessions for 2016’s classic, MY WOMAN. I love this song and she played it splendidly—her voice was crooning and hypnotic.

As the show began to slow down and edged toward its culmination, Olsen addressed the crowd. She asked what they had been up to prior to the show, suggesting the energy inside The Depot was due to something besides her spectacular music. She also teased all the college kids about not taking their studies seriously, instead choosing a night out with her. This banter was fun and genuine.

“All of the audience members were singing along to almost every one of the new songs as though they had known them for years.”

Olsen played one more from Phases, “Sweet Dreams,” another track I truly enjoy, prior to getting into anything from MY WOMAN. Olsen started tracks from that album with a bright performance of “Shut Up Kiss Me.” It’s one of her bigger songs, one that nearly brought the house down. She also got going into a Stevie Nicks–like rendition of “Sister,” singing with such emotion and power that all of the moving crowd became nearly motionless with respect and awe for what they were watching. Angel Olsen slowly played herself off stage with another track from All Mirrors, the calming, final, “Endgame.” It was the perfect end-cap to a fabulous performance. –Billy Swartzfager