SLUG Mag Soundwaves
Episode #403 – Mykah
00:00 / 21:59
Spotify Stitcher
RSS Feed
Share
Link
Embed
If you haven’t seen Built to Spill live, you have no excuse. Starting and ending their most recent tour in Salt Lake City, they gave me the opportunity to see them twice in the last two months. 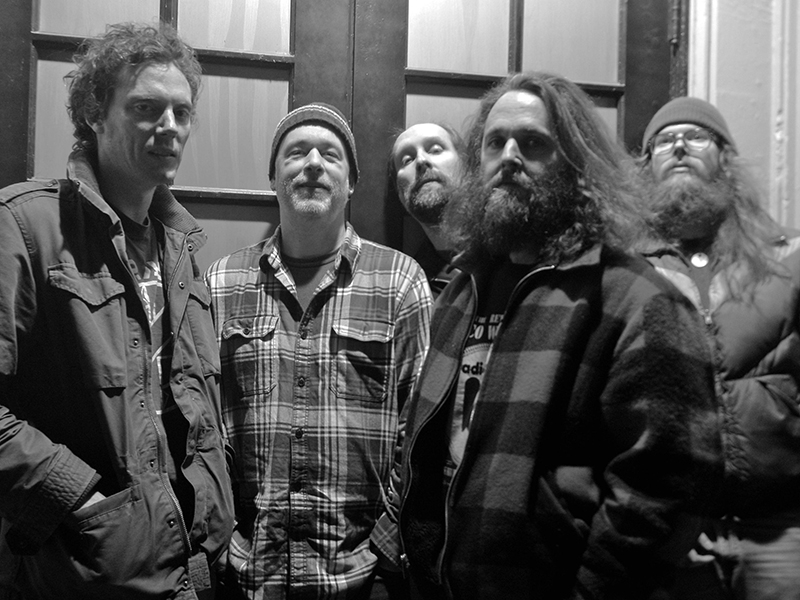 If you haven’t seen Built To Spill live, you have no excuse. Starting and ending their most recent tour in Salt Lake City, they gave me the opportunity to see them twice in the last two months. They played Kilby Court in October, and it was one of the best shows I’ve seen there. They opened with a new song, and from the first chord on the first night of the tour they sounded immaculate, even in the echoey cinder blocks of Kilby. They were precise but not mechanical or antiseptic.

Wednesday night at Urban Lounge was the last date of their tour, and it opened with Doug Martsch filling in on bass for Slam Dunk, a kind of garage band from Olympia, Washington. Their sound was something akin to the Black Lips if they had grown up on bluegrass instead of the Rolling Stones. What they lacked in proficiency they made up for in personality; I happened to enjoy their stage banter more than their music. Their set had plenty of energy, but was same-y and short on hooks, though they had some cool guitar lines spiked throughout their songs. Martsch was a class act though, bobbing his head and singing backup along with their yelps. He even wore a Slam Dunk T-shirt.

Next up was Genders from Portland. The four-piece mixed post-punk guitars with sensitive pop-rock that culminated frequently in a cathartic buildup. I realize on paper that sounds like the exact formula for emo, but Genders were more reminiscent of Stars than Rainer Maria. Their set was pleasant enough, and I liked the vaguely math-y guitar interplay, but not everything was quite fitting together. For one, their timing and three-part harmonies were a little loose in a way that didn’t work for this kind of band. Beyond that, their sound was too somber to make their buildups exciting. I also thought it was odd that the female lead singer/guitarist was off to the side while the male bassist was front and center. But they got a very warm reception from the sold-out crowd, so my ambivalence seemed to be in the minority.

Built To Spill opened with “Going Against Your Mind,” and during the break where the band cuts out except for the bass, I could hear the chatter of those at the bar. I prepared myself for another noisy Urban Lounge audience, but this turned out to be the only distraction from the crowd, aside from the inebriated (entertaining) antics around me near the stage.

I was surprised to hear that their set was entirely different from the one they played at Kilby. It’s a testament to the strength of their discography that they could have picked a different set every night by throwing darts at their track listings, though I’m a little puzzled that they have frozen us out three times in a row with regards to “Car.” My friend remarked the last time we saw them at Urban Lounge that if they didn’t play “Car,” they were messing with us, and maybe that’s the case. It did seem especially pointed considering they played a total of four covers. The encore consisted of “Don’t Fear the Reaper” (complete, yes, with cowbell), a spot-on version of the Smiths’ “How Soon is Now,” and “Train in Vain.” Pavement’s “Here” came in the middle of their set, and while it was interesting because of how much it sounded like a Built To Spill song, I could name a handful of actual Built To Spill songs I would have rather heard.

Built To Spill’s music tends to be sneakily inspirational; their humble Idaho origins and trucker chic help to disguise it. Where their Kilby set tended more to the uplifting pole, this show displayed a little bit more eccentricity. Guitarist Brett Netson, who smoked a single cigarette (indoors) through the course of the show by snuffing it after a couple of puffs at a time, sang one of the songs, a kind of gothic Bonnaroo funk jam. It was bizarre, but fun. There were moments though, specifically “The Plan” and “Carry the Zero,” when there was no escaping the uplift. It’s one thing to hear the opening chords of those songs on your headphones, but another thing entirely to hear them live with a sold-out crowd singing along. “Carry the Zero” was their set closer and came with an extended middle section, full of Martsch’s lyrical guitar soloing, as well as an extended coda.

“Train in Vain” from their encore was a highlight for me. The two other bands joined them onstage, and you could sense their relief at ending a six-week tour. Add in hints of smiling from the typically laser-focused Martsch, and it seemed to be the most fun they’d had all night.

From Martsch’s terse stage persona, I had always assumed him to be a kind of reclusive genius, but I chatted with him a bit after the show, and he was very warm and personable. I mentioned I would be reviewing their show for SLUG, and he said he was glad SLUG was still around. Built To Spill’s best moments tend not to jump out and grab you, but rather stay hidden for you to discover them. They’re a band full of pleasant surprises, and it applies to their live show as well, whether it’s sounding amazing both in the glorified garage of Kilby Court and in the perennially bass-heavy mix of Urban Lounge or playing “Don’t Fear the Reaper” a good decade after it was a ubiquitous joke. Like I said, you have no excuse for not seeing them live. The good news is that they’re consistent in coming through, and I expect I’ll be seeing them again soon.