Douglas Benson’s vocals are so spot-on that if you closed your eyes you could be transported to a Cash live show circa 1962. Songs like “Boy Named Sue,” “Walk the Line” and even the folk tale epic “The Ballad of John Henry” were all done with attention to detail in such a way that these guys weren’t just playing Cash songs, they were playing Cash songs the way Cash and his band played them 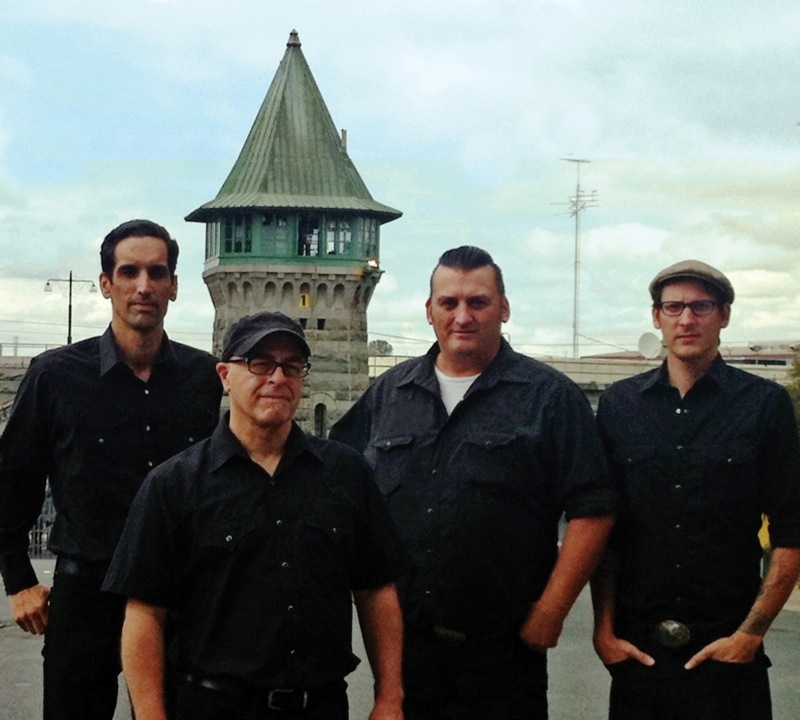 Cash’d Out has the Folsom Prison Blues, as photographed by some random tourist. Photo courtesy of Cash’d Out.
A tribute band is a funny thing when you think about it. They spend their existence dedicated to the works of another. They bring someone else’s expressions of their thoughts and feeling to life, but this is usually done in a very loving and loyal way. No one is claiming these songs as their own, but rather taking on a sort of stand-in role, since the actual artists aren’t always available. Such is the case with Cash’d Out. Since Johnny Cash’s passing his popularity has skyrocketed so the demand is certainly there, but the fact that they are taking on an icon at the level of Johnny Cash shows either confidence or insanity. Cash’d Out have made something of a name for themselves playing the songs that made Johnny Cash a household name—mostly material from the Man in Black’s early days in the ’50s and ’60s. With all the attention that Cash’s later recordings with Rick Ruben have received, it’s nice to revisit the classic era of the icon.

My first impression up arriving at The State Room was that the show was packed—I know that Cash still had a following, but I didn’t realize it was strong enough for so many people to dedicate a Friday evening to. For me, a dyed-in-the-wool Cash fan, it was a pleasant sight to see.

They hit the stage and right away I was greeted with that warming feeling that listening to Johnny Cash always makes me feel. Douglas Benson’s vocals are so spot-on that if you closed your eyes you could be transported to a Cash live show circa 1962. Songs like “Boy Named Sue,” “Walk the Line” and even the folk tale epic “The Ballad of John Henry” were all done with attention to detail in such a way that these guys weren’t just playing Cash songs, they were playing Cash songs the way Cash and his band played them. So much so that as an avid fan of the material, I was picking up on little phrases and pronunciations that are singular to Cash recordings. Between songs, Benson would talk about Cash’s life and give little did-you-know facts about him and his family.

About 35 minutes into their set they let the audience know that they had brought a “June [Carter]” with them this time. It’s one thing to take on the tunes of the great Johnny Cash, but to try recreating the chemistry that he had with his wife in the duets they were famous for is another beast all together. When Nena Anderson took the stage, songs like “Jackson” and “It Ain’t Me Babe” just floated out to the crowd, who inhaled them in like the scent of Thanksgiving dinner. Nena played the role of the female antagonist perfectly, even joking that she’d be finishing a bottle of whiskey after she was finished on stage—my kind of gal. To hear the entire room chant the “NO, NO, NO!” part of the chorus on “It Ain’t Me Babe,” it struck me that that’s how the audience must’ve reacted when Johnny and June sang it live.

Nena even took over lead vocals for the Carter Family classic “Wildwood Flower” and then launched into the only original of the night, “One More,” which was a refreshing break from all the Cash that had been banging around the room. After the show I made sure to pick up a copy of her record Beyond the Lights.

When the band went back to strictly Johnny’s songs, I felt a little let down in the room. While everything the band put out there was enjoyable, it was apparent that the evening had hit its high point and it took a bit for that feeling to lift. But once the band got into “5 Feet High and Rising,” an old favorite about the Cash family surviving a flood, I realized that these boys were doing their best to preserve the storytelling aspect of what had always been special about Johnny Cash.

The thought I left the show with wasn’t that I had just experienced the closest to a Johnny Cash concert I can ever see now that he’s gone. Rather, I got to enjoy his songs and his expressions with musicians that hold him and those songs in such regard that they’ve dedicated themselves to bringing them to life for people every night. Sadly, Johnny is gone, but going to a Cash’d Out show is like getting together with a bunch of Cash fanatics and sublimely listening to his old records.