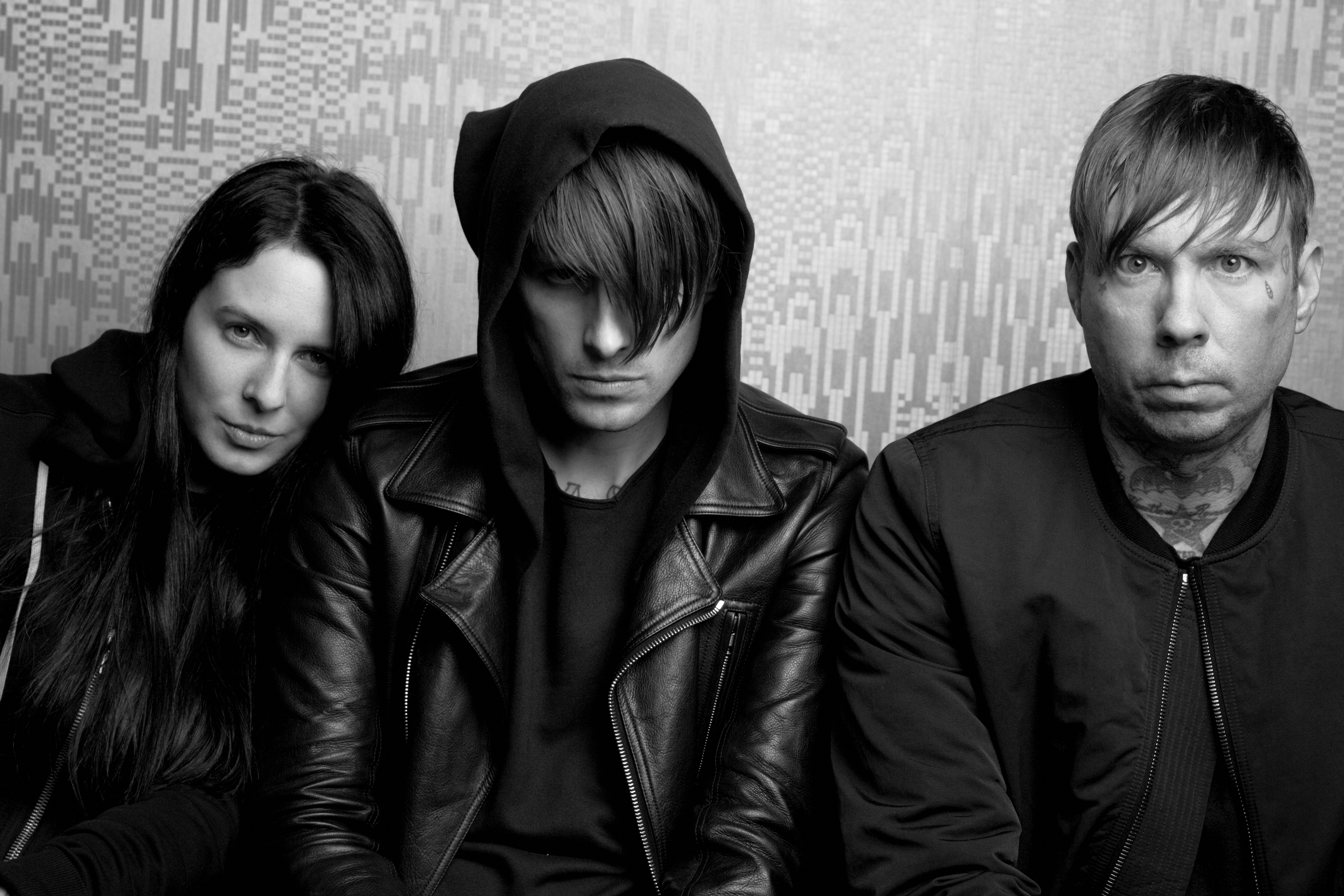 Friday the 13th: an ominous and seemingly perfect date to watch Wesley Eisold and friends rattle the cage of discontent with a sound that takes the electro-punk aesthetic of Suicide and merges it with the songsmith of New Order—a discordant pop that references the past, but feels comfortably progressive. Everything that is old resurrected for future use.

Let’s not get ahead of ourselves. There’s an opening act to discuss.

Drab Majesty, a Bloody Mary of sound prepared by Deb DeMure, a stocky Genesis P-Orridge reincarnated (and alter-ego of Andrew Cinco), that plunders the vaults of 4AD to create a sound that is familiar, but not redundant. It’s the best of 1985: Cocteau Twins, Clan of Xymox and an 808 nicked from The Sisters of Mercy’s Doktor Avalanche operator. DeMure plays the cascading guitars and provides the majority of the vocals. A harlequin of sorts dressed in a red graduation gown augments the sound with a wash of synths.

In Drab Majesty’s performance, there’s a sense of ritual, not quite to the extent that you’d see from Killing Joke’s Jaz Coleman, but just enough that I’m temporarily taken back to 2001 when I watched Peter Christopherson, John Balance, Thighpaulsandra and friends bring the beast known as Coil to New York City’s Irving Plaza. Drab Majesty’s show is equally theatrical, but on a small scale. At the back of the stage on a platform is a bust, something that looks Roman, and it rotates throughout the evening. In a strange way, it sums up the band perfectly: simple, but effective.

The crowd, instantly entranced, responds by giving the band its attention. This wasn’t a night where the half-shouted conversations drown out the opening act.

When they were finished, we still wanted more.

This would be my first time seeing Cold Cave. I was late to the party. It wasn’t until a couple of years ago that I picked up their 2011 release, Cherish the Light Years and 2009’s Love Comes Close sometime after. I liked what I heard, but my rather insane schedule kept me from ever really diving in.

I planned to attend one of their shows whenever the chance was presented, but nearly skipped the show due to the stress of preparing to cover the impending Sundance Film Festival was on the verge of becoming overwhelming. Still, it was suggested I go, and in the end, I walked away with an experience that I would have been a fool to miss.

Eisold, backed by a pair of keyboardists, took the stage with a relentless performance charged with the same sort of attitude, charisma and energy that Suede’s Brett Anderson has used to push crowds closer to the Rapture for the better part of 30 years.

Dressed in a black leather jacket layered on top of a hooded shirt and black jeans, Eisold demanded the audience’s attention as he stalked the stage. Occasionally he’d lean into the crowd. At other points, he would perform with his back to the audience—a strange but perfect style that reflects the intimacy of the venue with the standoffish aspects of the music. It’s not hard to understand why Eisold has found a rather devoted following. He gives the show his all, holds nothing back and, once he’s given everything, he reaches down deep to offer a little bit more.

The light show is extremely sparse. The bulk of the stage is lit only by the images projected against the screen at the back, with only the slightest of support provided by the overhead lamps. It suits the mood, the aggressive noise caught up in the undeniable hooks of the songs.

I regret that I seem to be the only one near the front who doesn’t know every word to every song.

The set is dominated by material from Cherish the Light Years, an arrangement that I must admit favors me, seeing as it is the album that I am most familiar with. The show, however, kicks off with “Love Comes Close,” the title track from their first album and a song that is perfectly caught in the same space that Joy Division was in as they transitioned into New Order. It’s a bouncy slice of pop music laced with a certain disconnect.

What follows is a mesh of distorted electronics, booming electronic drums and a sing-along chorus that should, but doesn’t, feel out of place.

“Icons of Summer,” “Underworld USA,” “Confetti,” “Catacombs” and “Villains of the Moon” have us dancing, screaming and begging for more.

It wraps up a little too quickly, but not in the way that makes you feel cheated. It’s a fairly short set, only 10 or so songs, but what was given was strong enough to silence those who expected far more. Quality trumps quantity (although the best of both worlds is always happily received).

Eisold, it was great to finally see you live. Next time, I promise to know the lyrics so I can scream along with you and the passionate masses.