Combichrist @ In The Venue 10.18 with William Control, Davey Suicide, Darksiderz 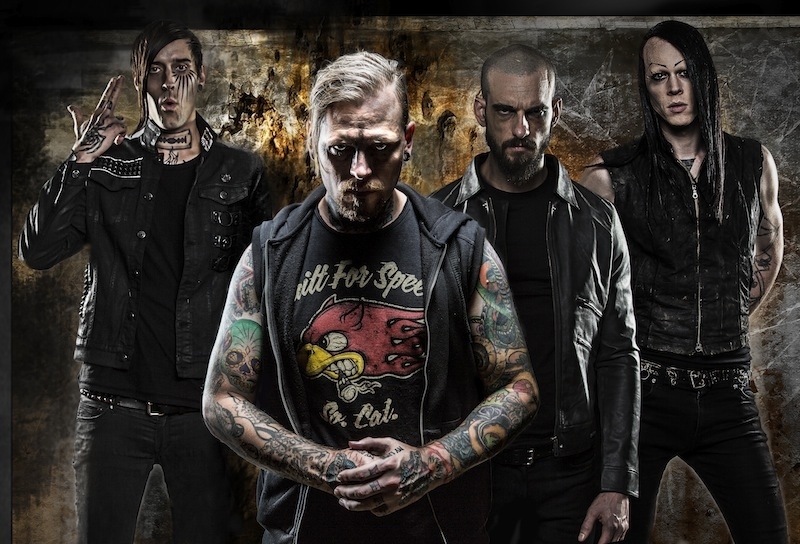 Combichrist feels that it is important to touch base with their fans and get on a personal level with as many of them as they can. Photo: Warren Whitmore

As I stood outside of In The Venue on Oct. 18 for the We Love You Tour Part Two, I noticed I’ve missed one of the things I enjoyed about concerts—waiting in line for the doors to open. It’s great to stand outside and get to know my fellow attendees. I was able to chat with some like-minded people about fashion and music, and I made a few new friends. As we funneled into the concert, I realized that this was going to be a more intimate show. I think this was due to the fact that some of the bands were just here in April. This was a plus for the crowd. It was an opportunity to possibly get to meet and greet the band members and get their CD, T-shirt or even get your tattoo signed by one of them.

After everyone was settled, a tall grim looking figure took the stage. He had the look of a road warrior from the movie Mad Max. Now, compile that with a corset and baby powder and you have the first act of the night—Davey Suicide. The flashing red light and strobes were amazing. They shadowed the members of the band perfectly and produced a wanted, horrific atmosphere. With tracks like “God Head Killers” and “Generation Fuck Star,” I felt as if I had wandered into a metal concert. The band put on a great show and were thankful for the fans that had returned to see them. I did notice a lot of people running around in their merchandise.

Old School-style gospel music played and changed the atmosphere completely for the second band, William Control. I was surprised at his lineup placement, I would of thought he would have been placed next to the headliners. Massive aggression and powerful emotion is provoked with this music. His band played with precision and although there was intentional reverb, his crisp clean voice powered through. In between the first and second song he did his normal thing and addressed his hair. He spat in his hand and slicked it back. During his performances, Control likes to undress a little. I was impressed when I briefly saw a portrait of my favorite writer Edgar Allan Poe tattooed on his chest. No woman can resist a greased up gentleman in a suit, and I think Control gets this.

One of the things that appeals to me the most about this band is the passion behind the music. With lyrics that address dominance, submission and thought patterns, the style grabs me personally. “The Filth and Fetish” had to be the track that moved me the most. It dug its hooks in and forced me to think about some pressures in my own life. Control is not afraid to address the darkness in human sexuality. With the onstage antics, enticing performances, and powerful voice, he is placed as one of my favorite live artists. It was also great to see that they have replaced their drummer with Ben Tourkantonis. That guy has toured with three of the bands I have seen in the last year.

An interesting addition to the tour was a DJ named Darksiderz. At first, the crowd did not know how to respond to him. It was obvious they were not used to having a DJ mixed in between bands. He addressed them with energy and pulled them in with his music. They began to dance and I joined them. His set seemed to be more of an agro-tech style with a dash of power noise. It was interesting to watch how another mixes this style of music.

Dark orchestral music played and most of the crowd was standing in a submissive stance with their hands behind their backs. The anticipation built while they waited for the headlining Combichrist to hit the stage. Like their last performance, they came out to “We Were Made to Love You,” and the chant of “Hate, Dishonor, Love, Destroy.” This time their appearances were a little different. They all had painted faces—mostly white, but with a few accents. The drummer, Joe Letz, looked like a morbid clown, which was fitting for his persona and the keyboardist Z. Marr looked as if he was straight out of the film Mirrormask. The stage set up was different as well. Letz was sideways, which had me wondering how he would address the crowd. He is such an animated drummer.

The band played with much aggression, and at times it looked like the singer Andy LaPlegua was wanting to mosh. The guys look like they always have a great time together when they play. The room peaked with energy when they played “Maggots at the Party.” Occasionally, when you are playing live, things happen. This time the nemesis was microphone troubles, but they handled it with such professionalism that they made it entertaining. They are so good at performing with each other that they carried the crowd through the difficulties without losing any energy. Their encore was the track “What the Fuck is Wrong with You.” The crowd wanted more but the night had to end.

Combichrist is one of the most influential bands in the industrial music scene and has been for some time. I have never been let down when I have seen them live. They are constantly requested in the clubs and always put bodies on the dance floor. Their antics are entertaining and it is always a great time to see them play. William Control should be back around March, so come check out his show then.