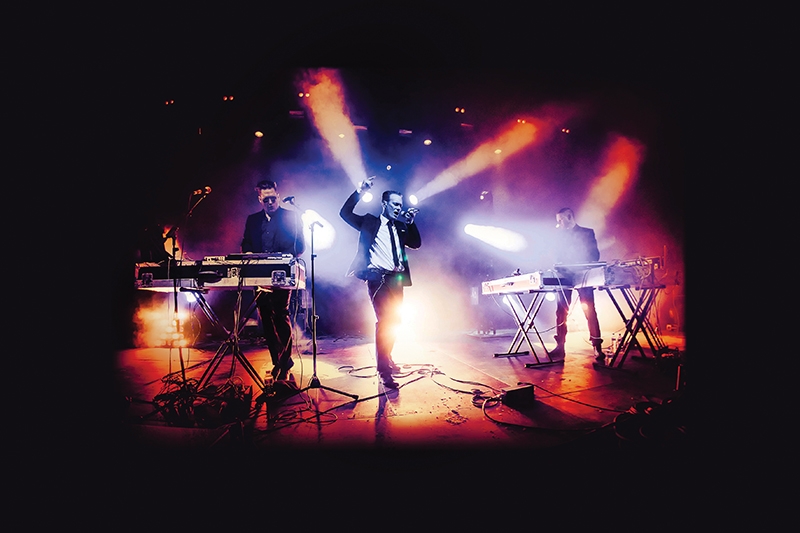 Covenant: Keeping the Vow with The Labyrinth, Voicecoil, Tragic Black

Our city of Salt has had some amazing darker electronic musicians play here over the last six months. On April 6, Swedish band Covenant headlined the evening and, as always, kept their vow and blessed us with an amazing performance at Area 51. Locals Tragic Black, Denver-based Voicecoil and Seattle’s The Labrynth were the supporting groups for the evening. The lineup brought out a heavy attendance of all types, and their clothing ranged from boots and suspenders to evening gowns. They were all there to pay their respects to the artists and to be carried away by the music they loved.
Tragic Black kicked off the evening and immediately I noticed a slight change in their sound. The cause could be the result of the original members Derek Winters Rhodes and Vyle Black’s own creativity, Ben Stich joining the band or Starbass’ Steve O helping to produce their new album. Regardless of where it stemmed from, I favor this new direction the sound has taken. As the anniversary of the death of legendary and inspirational Christian Death singer Rozz Williams had just passed, it was no surprise to hear their tribute. Just by looking at Tragic Black, you can see how much of an influence his band has had on them. It was sweet for frontman Rhodes to serenade his beautiful wife while he was playing on stage—showing that love can pierce the blackest of hearts. The highlight of their performance was the on-point cover of The Church’s “Reptile”—that song has always been a favorite of mine.
After an amazingly quick change over, Voicecoil was on stage. Mark Sousa has an amazing voice and uses very little effects on it. This, combined with an energetic performance and synth-pop sound makes him a regional favorite. He always shows gratitude for being able to have gigs in our city, and he connects with the locals. It is nice to have a regional artist that cares about what we do here. Having him doing support for Covenant is a perfect fit aesthetically, as they both perform in suits and ties—all ladies and some gentlemen appreciate a man in a suit. It really does look hot, especially with all of those lights and dancing around. I hope they stay hydrated.
The Labrynth was up next. I had never heard of this duo so I really did not know what to expect. Their sound was amazing. My ears were assaulted by aggressive electronic and synth-pop beats and I wanted to dance immediately. Sarah Stewart and Michael Wimer took turns on vocals, which kept my interest piqued. The crowd died down a little when they came on, but I think that was due to no one really knowing who they were—which is frustrating for everyone. I just do not get why people are not more open to new music. The industrial classics are great, but sometimes you need to freshen it up a little and check out what’s new. The crowd that remained danced and, a few songs into their set, the room was full again. I was happy that I grabbed their CD earlier in the night.
The stage cleared, the room filled with fog and the lights pulsed in time with a non-climaxing ambient noise that played for what seemed to be an eternity. Covenant wanted the crowd to feel the anticipation for them and it worked. The audience was ready, and even the sound of a fog machine would make them scream with excitement. “Bullet” was the opening song—sure, it was predictable, but it’s a favorite here in Salt Lake and the crowd was rewarded for their wait. Covenant’s setlist was compiled of their greatest hits, including “Call The Ships to Port,” “Ritual Noise” and my personal favorite, their new track “Last Dance,” yet “Dead Stars” was left out—I wonder if that was because it is so overplayed in the clubs. It is a great track and has one of those catchy beats you just cannot get out of your head. As this was my first time seeing Covenant play live, I wanted to see them play that song. Their stage presence was just as powerful as their music. The three piece band were in their signature black suits, with Daniel Jonasson and newbie Andreas Catjar standing to the sides of front man Eskil Simonsson. All members of Covenant were energetic, on point, and delivered an exquisite performance. When Simonsson sings, you can tell he is not just going through the motions but is, in a sense, preaching his powerful lyrics to you. He would speak phrases of the song before the band would play them, giving the lyrics more staying power.
I turned and took a good look at the crowd and was utterly amazed at what was happening. Many had become fully engulfed by the music. There was such passion for Covenant flowing out of them. They sang with their eyes closed and their bodies swayed to match every beat. I almost expected them to raise their hands, shout “Hallelujah” and pass around a box of tissues. I then reflected on my own memories when it comes to songs and knew exactly what the crowd was feeling. On this night I saw Covenant are the most requested and often called legendary.
Photos: