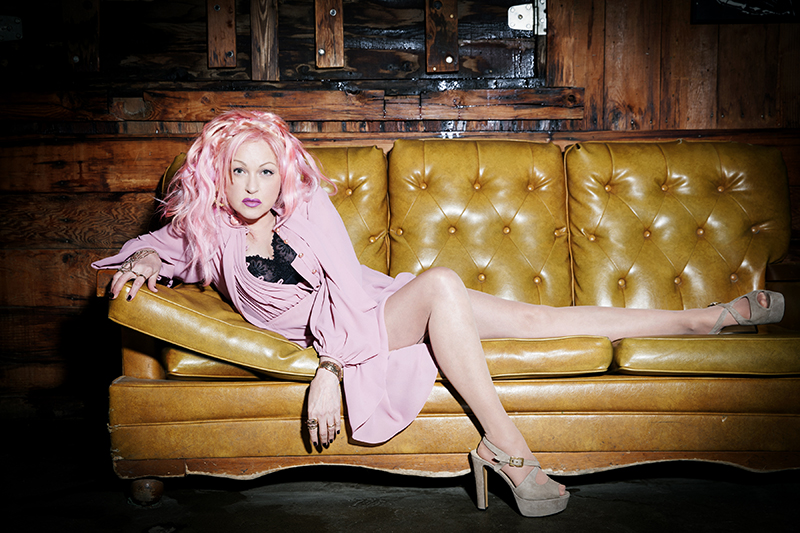 I may have been introduced to the magical world of music courtesy of Michael Jackson’s Thriller in 1983, but it was seeing Cyndi Lauper on television a year later that changed the way I looked at the world.

At that time, the strangest aspect of Jackson’s persona was his penchant for wearing a single sequin glove. Lauper was an entirely different commodity. With her multi-colored and ratted-out hair and bizarre fashion sense that bridged aspects of punk and new wave with something entirely her own, Lauper was the most outrageous person I had ever seen, and the world admired and celebrated her for her uniqueness. It had never occurred to me that a person could be so incredibly different from everyone else in the world and still be by and large accepted by the status quo. To 8-year-old me, she was the coolest, most liberating person in the world.

Despite years of fandom, this would be only the second time I would see Lauper in concert. The first time had been as part of the True Colors traveling festival in 2007 (on my birthday). Festivals are good for seeing artists in bulk, but they tend to offer much shorter sets and often lack the intimacy of  a non-festival performance.

Seeing Lauper at The Depot was an experience I wasn’t going to pass up (even if that meant I’d have to sacrifice seeing Tears for Fears in the process).

The night starts with a set by Charlie Musselwhite, a renowned blues artist that collaborated with Lauper on her highly regarded and commercially successful Memphis Blues release from 2010. Would I have preferred Boy George, who opened up a handful of the early dates on the tour before embarking on Culture Club’s American tour? Yes, but I shouldn’t say that too loudly, considering I’ve already been chided by George directly for being dismissive of Groves, Culture Club’s openers from their Red Butte Garden concert earlier this year.

That said, Musselwhite and his band performed an excellent 40-minute set that offers up plenty of evidence that modern music owes an incredible debt to the blues genre. If you’re looking for a direct connection between the likes of The Beatles to Led Zeppelin to The Cult to Depeche Mode and beyond, it is easily found in the blues riffs that all of those bands repurposed for their own material.

Going into tonight’s show, I knew that there would be a chance that I wouldn’t be as smitten with Lauper’s set as I would have been on practically any of her other tours. Her most recent album, Detour, is a collection of early country covers from the likes of Ray Price and Patsy Cline. I’ve never cared much for country music. I have some Johnny Cash, Hank Williams and Willie Nelson releases in my collection, but was never able to really appreciate the genre.

Lauper opens her set with “Funnel of Love,” originally made famous by Wanda Jackson. It, like all of the country songs that Lauper performs this evening, comes from an era when the lines between blues, rock and country were far more blurred than they are today. There’s only a hint of twang, courtesy of the steel lap guitar, but I’m not convinced that I’m going to enjoy this set as much as I would like.

The mood instantly shifts as Lauper gives us “She Bop,” a rather notorious single from her debut album, She’s So Unusual. I’m listening closely to the arrangement, afraid that it will be adapted to fit the tone of the country covers. There might be a hint, again coming from the lap guitar, but for the most part, it’s a faithful slab of brilliant nostalgia.

Before diving into “Heartaches by the Number,” Lauper talks about why she wanted to record a country album. It’s a narrative that she builds upon throughout the evening as she offers a look into her life. She always wanted to record an album for Sire Records, home of the likes of The Ramones and her “cousin” Madonna (who she praises for offending everyone with her “Like a Prayer” video).

It is in these off-the-cuff monologues where Lauper completely wins me over. She talks about staying in a Nashville hotel with a giant mural of Dolly Parton with the phrase, “What would Dolly do?”  written beneath it—a mural that inspired her to check out of the hotel after she experienced a run-in with a cockroach in the bathroom.

Lauper brings out Musselwhite for the blues number “Just Your Fool,” and moments later, she changes direction with “I Drove All Night,” a song originally intended for Roy Orbison that became a hit from Lauper’s A Night To Remember release (and later would be butchered by Celine Dion for an unsuccessful car advertisement).

The next three songs, “The End of the World,” “Walking After Midnight” and “I Want to Be a Cowboy’s Sweetheart” were all country covers, but the wonderful stories Lauper would tell about the role that the songs played in her life allowed me to hear the songs from a completely different perspective. Her appreciation of the songs informed my appreciation of them.

She closed out the set with a trio of pop hits: “You Don’t Know,” from her overlooked Sisters of Avalon release, a highly emotional version of Prince’s “When You Were Mine” and an equally charged take on “Money Changes Everything.”

The encore opened with “Misty Blue,” an Eddy Arnold track that featured Lauper singing into an antique telephone. “Kindred Spirit” served as an extended intro to “Time After Time.”   “Girls Just Want to Have Fun” closed out the first encore with Lauper jokingly changing the lyric at the end to “Girls Just Want Equal Funds,” a reference to the alternate version she performed with James Corden on the Late Late Show.

The final encore had Lauper return to the stage to perform a version of “Fearless” that led into “True Colors.”

Maybe the setlist wasn’t exactly as I would have written it, but I wouldn’t sacrifice any of the songs she played because they came with wonderful stories that made it easy for me to draw a connection from the 8-year-old me to the 8-year-old Cyndi. That’s something completely unexpected and wonderful.