What a weird night. I joined a cult (under the name Kanye’s Pet—my DJ name) that worships a bottle of soap and watched a girl make out with a picture of a Nascar driver onstage. 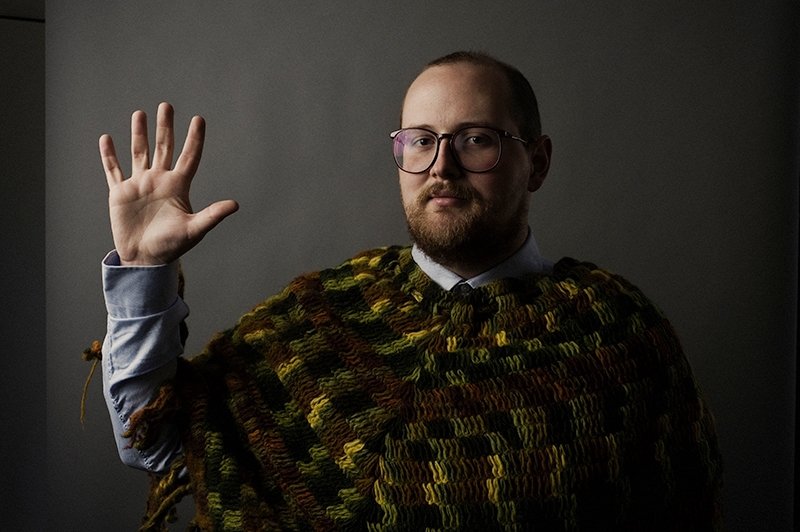 Dan Deacon’s shows are energetic and unforgettable experiences. Photo: Shawn Brackbill
What a weird night. I joined a cult (under the name Kanye’s Pet—my DJ name) that worships a bottle of soap and watched a girl make out with a picture of a NASCAR driver onstage. Let me elaborate:
I arrived to the Urban Lounge with my #bff Yada around 8 o’ clock. “What kind of music is this going to be?” he asked as we circled the venue three times, looking for a parking spot. “I have no idea how to describe it, but it’s fun!” I said as we got out of the car.
Shortly after we got there, Ben O’Brien began his performance. Floating onstage dressed like a genie, the comedian began his show with an interpretive dance before asking someone (Yada) to shine their iPhone flashlight onto him for the entire show like a spotlight. O’Brien began telling the small crowd about an enlightening experience he had in a time of need—he found fulfillment in a bottle of Dr. Bronner’s Magic Soap while on the toilet one day. His religion (cult) is not god-worshipping, but universe (soap)–worshipping. He explained this with a slideshow of photos of his naked body holding a bottle of soap. “Do you want to know how I know that my religion is real?” he asked. “Because I made it up, and now I’m telling people about it and they’re following it.” The whole room cackled. In an effort to not pee my pants from laughing, I took a quick break from the seminar and, when I returned, O’Brien was wearing a feathered headdress and educating us all on appropriation. “If you wanna wear a Bindi, do it. If you wanna twerk, do it. If you wanna wear a headdress, do it. Just don’t learn about it! If I learned what this feathered thing meant, I probably wouldn’t wear it,” he said as a slide behind him projected the words “Appropriation = Appropriate.”
After what was probably the most pleasant surprise of an opening act I’ve ever seen, I quickly went and bought his cult poster—a blown-up image of O’Brien standing in front of an ocean sunset, holding a crow while an illuminated hand reaches at him from above and an eagle lands majestically on his shoulder. For information on joining the cult, you can fill out the cult application, which asks basic questions like “What kind of soap do you use?” and “Do you own bolt cutters?”—you know, just some need-to-know information.
There was another band before Deacon went onstage—three tiny girls from Brooklyn, collectively known as Prince Rama that were dressed like Patricia Field threw up on them (in a good way). Dressed in neon-green leotards with big hair and neon face paint, the group looked like they were straight out of an ’80s workout video. The three of them bounced around onstage while lead singer Tarika Larson used a sound plugin to change her voice into a very deep, manly voice while she spoke to the audience. What made this band particularly interesting was their onstage energy. Though the music was good, it wasn’t the most memorable, but their excitement for performing and onstage antics (such as making out with a photo of a NASCAR driver) made their show so much fun. The group performed tracks from their most recent album, Top Ten Hits of the End of the World, while they danced around onstage and on top of the amplifiers, making the crowd go crazy.
Finally, around 11, Dan Deacon took the stage, where he began with a few minutes of stand-up comedy, making fun of the ridiculous railing that closes out a small area in front of the stage for a dance floor inside of the dance floor. “It’s like some guy was like, ‘Hey, i’ve got this extra railing and some wood flooring. Wanna square off a piece of the dance floor to make it hard for people?” Deacon said as the now-packed crowd laughed. Deacon’s shows are characterized by being highly interactive and energetic. A few minutes into the show, Deacon made everyone stand in a circle around the fenced-in dance floor while two people from the crowd had a dance off. Though there were only about a hundred people in the room, there was more energy at that show than any electronic show I’ve seen this year, and the lighting added to the excitement with strobes in every color. Deacon performed tracks from his extensive 10-year discography.
Deacon ended the show abruptly when he cut a song short, said goodnight and then introduced the members of his band before walking offstage. Deacon is currently on an international tour that extends through the summer and will finish at San Francisco’s Outside Lands in mid-August. After the show, I got an Earth Universe poster and a bottle of Dr. Bronner’s Magic Soap before heading home to light some candles and read the bottle. Happy Mothers Day, Mama. I joined a cult!
Photos: