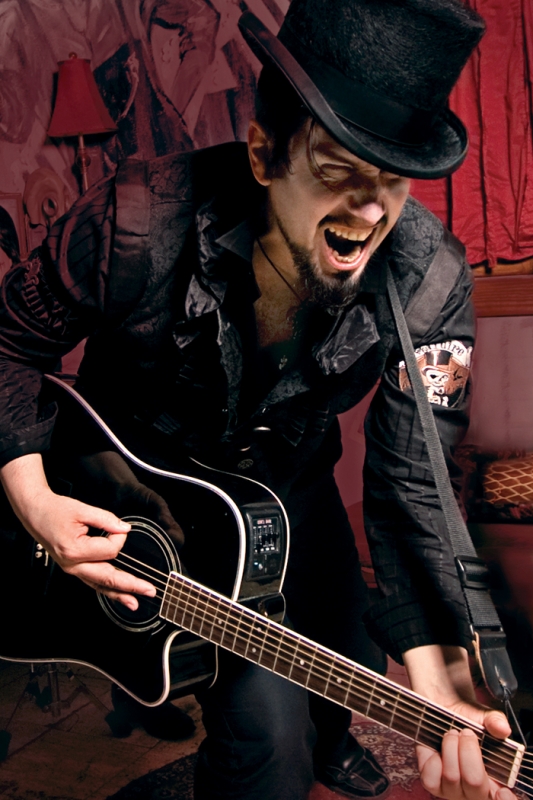 Voltaire is quite the animated characterand it wouldn’t surprise us if he was, in fact, Raised by Bats, which is the title of his next release. Photo: AlasVera

When I stepped foot through the doors of Area 51 during the Summer Solstice, I realized that I was in store for a not so ordinary weekend at my frequent haunt. The bar was decorated like an enchanted forest and I felt as if I had fallen through the looking glass into a world of faeries, Red Queens, vampires and all creatures of the dark. It was time for the Dark Arts Festival Of Utah. The theme was A Midsummer Night’s Dream. This festival is one that showcases the darker talents in life. One that will seduce you and take your mind on a journey through the obscure, the taboo, and the unexpected. It will darken your soul and give you a new appreciation for all of the things your mother warned you about. It allows you to feed your desires, be yourself and challenge your mind.

Several types of art pieces lined the walls and tables of Area 51, yet there were pieces that really stood out to me. I really wanted all of the pieces of Sharyl Sykora’s Egyptian trash art. The gold multi-dimensional pieces with hieroglyphs had me wanting to purchase every piece for my collection. Cas Reichs’ mixed media piece “Captured” took my mind on a journey where I would catch a faerie, I was left asking myself if I would let her go, or keep her as a pet. The photography pieces by Jeff Carlisle have always been a favorite of the festival for me with their dark imagery. This years’ theme was The Bathory Girls, a compilation of sensual and sexual vampires.

There were many vendors selling dreaded hair pieces, steam punk jewelry and everything you need for your dark fashion needs. I spent a few minutes talking to the guys at the animal free bondage stall Vegan Boundary. It was rather pleasing how very instructive and professional they were when it came to answering my questions on how to use their adult products. It is always nice to be more educated on how to satisfy my dark fetishes and intimate desires.

Throughout history of mankind we have always had a fascination with the human body and how it moves. As I have spent many nights on the stages I have a special appreciation for the dance portion of the festival. I truly am a voyeur when it comes to watching other bodies flow to the music. This year I was not let down at all as the performances were as close to dancing naked in the moonlight as Utah law would permit. Every performance was a beautiful creation. Every shape of the woman’s body was represented. It takes guts to get on a stage and perform, period. What I saw gave me new insight, respect and admiration for this type of art form. Today’s society has put so much emphasis on what a woman should look like, with Photoshop, diet fads and exercising to the point of anorexia, that we have lost the appreciation for a natural, realistic, beautiful bodies.

The Miss Tree burlesque performance had me on the edge of my seat. I was awestruck by her courage and creativity. She pounded and ground out the beats with her curves. Her confidence was the most impressive thing I have seen in a long time as she was not shy with her beautiful full-figured body at all. Her flirtatious facial movements and eye contact with the crowd made her even sexier as she stripped to her undies.

The creepy performance by Aputel is one that will haunt me for a while. A figure draped in sheer black crawled its way onto the stage, the music was eerie and reminded me as if something had escaped out of the depths of Hades. The material moved as if the ghoul underneath it was breathing and coming to life. The performance was full of convulsing, twitching and obscure moves, yet it was very mysterious and powerful. It appeared that the horrendous beast was fighting to return to the living but in the end the negative energy lost and it returned to the grave.

Unfortunately, life’s obligations did not allow me to attend Friday night’s performances by the Peruvian act Reaxion Guerrilla, and the locals Stich and Image Down, but I look forward to attending their next performances.

I did notice something when I was watching the local bands. There is a great sense of comradery between them which has overflowed into collaborations with the larger bands. It is great to see them building friendships and networking. Ben Houtz from Stich teamed up with Starbass to add grungy guitars to the dub-step industrial and flute sounds. I really hope that collaboration develops more. The post-punk of Tragic Black, and Vengence Tampon’s cover of “Crimson and Clover,” brought back some nostalgia for me. Although Zombiance was missing one of their members they put on a great show. You can never go wrong with blood, mask and gore. The Red Death Romantics had to be my favorite local band. DJ Evil K and his gang just have the creepy, lurking, gothic presence that sets the perfect atmosphere. I was amazed that he was able to perform after putting together such a festival. I was delighted to see everyone working together for a cause and not competing against each other for the attention.

When it came down to the headliners, I honestly do not think there could have been a better fit for the weekend—Juggernaut’s Denver, Colorado based Voicecoil was the headliner for Saturday night. They had started to play and something happened that truly made me smile. Not one person just stood there watching the band. The high beats per minute of the future synth-pop sound had everyone in the room moving, it was almost as if a DJ was in the room. There was not one person with their back to the stage. The entire room was stomping to the beats that Steve le Diable from Starbass and Mark Sousa of Voicecoil were pounding out. Tracks like “Vision” and “Amplify” had gained control over the room.

Sousa had an amazing voice that was crystal clear. I was really impressed, as it was like a splicing of A.E.C. and Assemblage 23—which are some of my favorites. He has created catchy music that you can sing along to (and not have to spend hours researching words because you cannot understand what he is saying). I stopped taking notes as the urge to dance overpowered me and I danced for nearly an hour without stopping. I will most certainly be mixing this band into my sets.

Voltaire is quite the animated character and like the title of his next release, Raised by Bats. I do believe he was raised by them. He had everyone busting out of their corset from laughter and bellowing out in sing a-longs. I was expecting something dark and decaying not something macabre and humorous. I know he has been crawling around the scene for a few decades but this was the first time I had seen him. He had the sinister appearance like the carnival leader in the movie Something Wicked This Way Comes.

This crazy Cuban played his single acoustic guitar and serenaded the audience with slams about Star Trek, Dr. Who, The Rocky Horror Picture Show and even sang a happy birthday song about how our skin starts to sag to members of the crowd. When he performed his classic “When You’re Evil” he called nearly half of the audience on stage with him to sing in the Salt Lake Beelzebub Philharmonic Orchestra. Although it was not necessarily in tune, it was most certainly in time. Everyone seemed to know the words. He proclaimed that the reason he has been successful for the time he has is because the lyrics have the people on stage proclaim their loyalty to the evil one and sell their souls!!

Voltaire also described Area 51 as his home here in Salt Lake City and by the crowds response it, it is. The Dark Arts attendees stood in line for nearly a half hour before his performance and after to purchase his merchandise, obtain his autographs and take a picture with him. Voltaire seemed to feed off of this energy, and by his body language you could tell he loved every second of it. He enjoys his fans as much as they enjoy him.

Putting together a three day festival really takes a lot of work. I could tell that the people who put on the festival were very passionate. The many wonderful, dark things that took place that weekend had me feeling like I was at home again. I was at a place where I could be as freaky or weird as I want to be and nobody judged. The dark art pieces were so beautiful. The dancers were mesmerizing and the bands had me wanting to dance, mosh, and clear the cobwebs all night long. I think everyone should visit the dark sides of their personality, some of them may not return to the light.