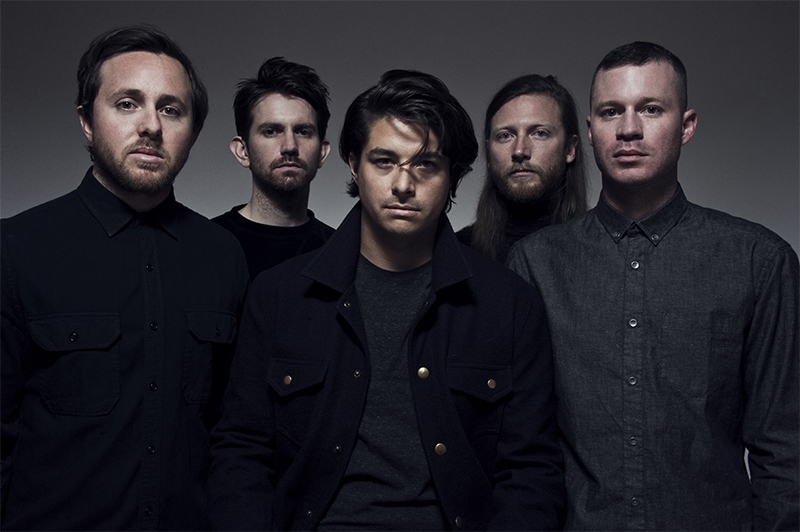 It’s a Monday night and I’m whistling my way toward familiar doors. When I walk into Urban Lounge, the first thing I notice are the giant slabs of thin, white plastic strips that are arranged like a fence against the back of the stage. I mentally deem its possible reference to Tom Sawyer as ridiculous, but it sure is impressive. Underneath the decoration, clusters of musical gear dominate the entire playing-area and I briefly daydream about a fire marshal taking off his badge so that the show can go on. Not this time, Frank. Not this time.

In any event, by 9 p.m. the dance floor is already filled with people, and the drip is steady underneath the approving eye of Jerry Sloan. The early birds are ready to go, and the main floor begins to compact as SACCO prepares their set. The width of space they have to play on is about the length of Shaquille O’Neal’s shoe, but the trio takes a strong stance against the ledge and faces the crowd.

Opening with “Time,” SACCO sets a tone with slow, psychedelic guitar sounds, bouncing bass lines, and jazzy drums. Immediately, I get the feeling that these guys aren’t going to rush things. Even with their flourished percussion style, SACCO’s groove comes with a kind of patience that reminds of The Zombies. Vocalist Andy Breihan has a pleasing, slightly-nasal drone to his voice, which creates a contrast of longing despite the energetic rhythms and brilliant bass hooks. The crowd is swaying.

With a sudden transition, they snap everyone out of their daze and dive into a more aggressive surf rock sound. Bassist John Fredericks takes a turn with vocals, and for a moment, SACCO brings immediacy into their line-up. However, this is short-lived as they turn back to the grooviness of “Kerosene” and a cover of a slow, classic surf song that I swear I’ve heard Bad Brad Wheeler use to advertise his station. The name escapes me; I’m ashamed.

By the end of their set, Urban Lounge is beginning to reach capacity, and the crowd seems adequately reved by SACCO’s performance. Hands full of gear and wading through rowdy fans, the band packs up their equipment in double-time. For now, most everyone’s attention has turned towards the bar – save the first fifteen feet of crowd who, god dammit, aren’t giving up their spots for noone, no how.

Some time passes; the room dims. Behind the white strips I mentioned earlier, backing lights assume a low glow and a projector unifies them with kaleidoscope imagery. An organ plays a cinematic intro to “From Now On,” and when Delta Spirit takes the stage, they hit the ground running. Arms up, the crowd is already reaching for the song’s screeching guitar bends, and I prepare myself as best I can.

Before I go any further, let me emphasize the unbelievable amount of fucking energy that radiates from Delta Spirit’s lead singer Matt Vasquez. I’ve seen a few shows in my brief life span, but I haven’t seen a frontman be this inclusive with an audience in a long time. Vasquez convinces me that he’s going to be jamming this hard to his music whether everyone is there or not. However, since we are here, we’re going to have to get on his level. And by God, we’re trying.

After “Tear It Up,” Vasquez dedicates their set to local band The Fucktards and Kilby Court. He shares a small story of their history, expresses his immense gratitude to be playing in SLC, and is interrupted with a laugh as two women in the front raise a sign that reads “Play ‘Streetwalker.’” Delta Spirit tours through many songs off their most recent album “Into the Wide.” If you’ve read SLUG’s feature on this, then you know that the release was made through a catalyst of claustraphobia. The ethos of this biography seems suddenly palpable as the walls of Urban Lounge resist their own tumbling. Not to be dramatic, but their showmanship cannot be captured in any recording. Delta Spirit play with a vigour that would make any nihilist take up a journal.

Once they caught up the crowd with their new album, Delta Spirit turn back towards some classics from their first two releases. During “People C’mon,” the line “all you soul searching people” sings back from everyone in the crowd, thus dissipating its own sentiment of loneliness. Vasquez then crowd-surfs for a solid minute through “Trashcan” before making it back on stage. Thirty minutes of playing and the band is still riding the top of their wave in front of the spindling lines and vaguely geometric images of their projector. We’re hooked.

The band finishes their set with a rowdy version of “White Table” in which all of the members descend into cacophony that barely rivals the cheers of the audience. The crowd is so thick and sweaty by now that it’s hard for most to tell where they end and others begin, but they’re still demanding more. I always appreciate when an encore feels deserved, and tonight is one of those nights.

Delta Spirit returns to the stage with solid renditions of “Parade” and their newest title-track “Into the Wide.” For the last song of the night, and they have to insist the last song, Vasquez began strumming the slow beginning to “People, Turn Around.” He gets through the first two lines and has to stop. It may be the feeling in the lyrics, it may be the gratitude of the crowd, but Vasquez is choked up. He takes a couple breaths and thanks everyone again for supporting them now and before. Getting back into it, Delta Spirit brings the entire room together with this triumphant song, and we all rally together like we live in a goddamn musical. Honestly though, at this point, to not sing would make you the Scroogeist of Scrooges.

They finish their show to ecstatic thankfulness. As they walk to the green room, the audience begins to dissolve back into individuals. As naive and cheesy as this sounds, I left their show feeling like nothing in the world could be cliche or unimportant. Even if Delta Spirit’s music isn’t on any of your playlists, you couldn’t leave their show saying they didn’t fully believe in everything that they are doing. And for that, I’d say these guys are welcome back to Salt Lake City anytime they wish.