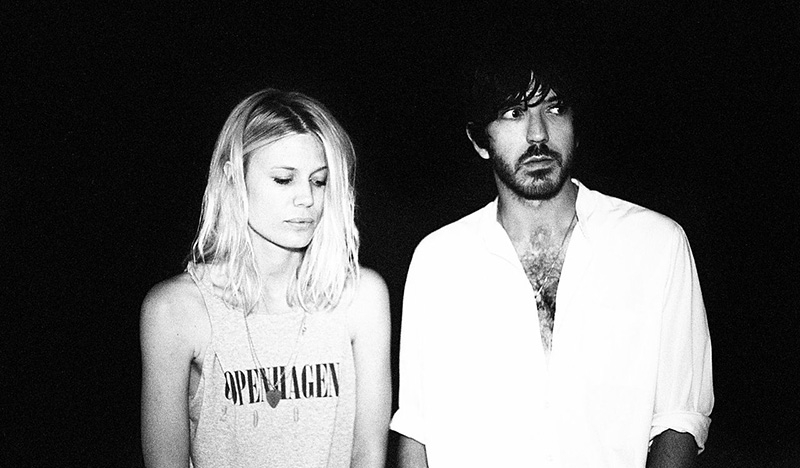 Ex Cops came to The Depot Friday, Oct. 17 in support of their album Daggers and their pals, Dum Dum Girls. Photo: Guillaume Gilbert

No doubt subconsciously aware of the adverts around town for the Dum Dum Girls gig on Oct. 17, my eyes re-focused on a split 45-rpm record in Diabolical Records. I was there to pick up some singles for an impromptu shindig I was throwing and needed some new tunes to spin. Playing the Dum Dum Girls single “Pay for Me,” I was immediately hooked by the melodic-but-with-an-edge vocals provided by Dee Dee Penny. The following week, I decided that the only logical course of action was to check out their show at The Depot. As this is the only way one with a Blues Brothers mission-from-god-like enthusiasm for the addictive sound of rock n’ roll can proceed.

As I make my way into the main room of The Depot, I take in the ambience presented by the purple lights that illuminate the stage. Grabbing a drink at the price of my arm, but luckily not my leg, I scope out a table to set myself as tonight’s fly on the wall to make keen observations. The venue is less than packed, but has retains a decent sized crowd for a room this size. Ex Cops’ entrance to the stage garners the interest from the assembled audience. Wasting little time they launch into their set, blasting out numbers from their new album Daggers like “White Noise” and “Tragically Alright.” Theirs is a captivating performance that seems to be over almost as soon as it started. Their noise pop reminds me of something that I’d find in a hip art deco type scene. All that’s missing is abundance of folks with ironic beards drinking Olympias from red plastic cups.

Lyrically, Ex Cops are easy to follow due to their simplicity. This poppy and catchy sound comes across as remarkably passive, lacking anything that would provoke twisting and shouting. These defining characteristics are only extended in range by the volume at which it is played. Despite this, they are well received, as after each number the number of audience members applauding grows slightly larger.

The one noticeable change in tone during their set comes from the number “Tragically Alright”. Originally, this song featured Ariel Pink and it provides a consistent groove that is easy to follow via its smooth build ups. Though not quite gritty, it still holds my attention by being pleasurable to listen due to its definable pop rock sound. By far the most interesting I’ve heard so far and easiest to digest. Overall they are easy to listen to, but easier to put in the background of tonight’s scene. Perhaps they would be better suited to an art gallery showing or something similar that would host lounge music.

The wait for the Dum Dum Girls raises a slightly noticeable buzz of excitement among the crowd. The audience by this time has gained more numbers, and everyone seems to have chilled out, chattering away or revisiting the drink line. As the lights dim, the talking subsides and attention is re-focused onto the stage. The Dum Dum Girls position themselves in front of their audience and their presence comes across as darkly charismatic. This is something that is illuminated by the bright blue lights shining behind them.

Providing a strong build up into their set, their delivery is solid. They knock out numbers like “Lost Boys and Girls Club” and “Got Nothing” with a certain soothing, yet pop rock harmony. I’m hooked by their sound immediately. Enough that I waltz over to their merch table to buy a 45. Though I do not regret the decision to buy a record from this group, my before-show enthusiasm is tempered by a lack of showmanship. Technically speaking they are great, even with their constant breaks, during which they leave enough energy in the air to continue to the next song with a smooth transition. But I need just a bit more to feel as though I have blood pumping through my veins. I’m not sure if their lack of emotion during their set is a part of some cool composure thing or they are just going through motions. I am a little disappointed by their lack of vitality. I mean, before their set started I was warned by a posh young man that he might he might bump into my table due to some wild and sporadic dancing. Alas, I am left without even that jolt to my nervous system. Sitting next to me, concert-goer Janet speaks up, “Sounds like more like a band practice than a show.”

Further striking me as odd, their set is almost completely halved by an encore. The encore is as long as the first half of the set. I don’t know why they didn’t just keep playing instead. The show gets out around half an hour to midnight and it is still early enough to go out into the world to cause trouble. Even though their performance is less than inspiring, I still dig them. However, next time instead of checking out their gig, I might just stick with the record.