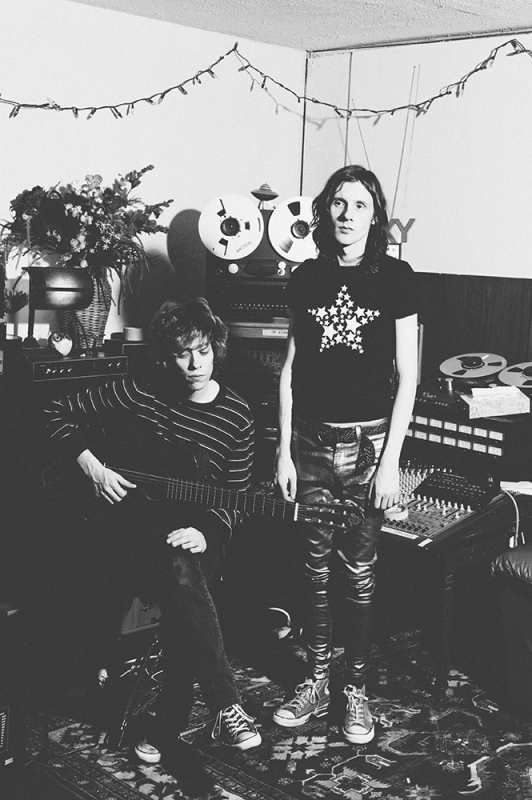 When I heard that Foxygen canceled their opening spot with MGMT for the Twilight Concert Series last year, the news hit me pretty hard. So I have to admit, after hearing that they were coming to Salt Lake City this fall, I withheld my enthusiasm—I’ve been hurt before. But tonight, the marquis of Urban Lounge proudly boasts their arrival, and it thaws my cold, nervous heart. Uh, I mean … “Word.”

I make my way inside and, at first, the bar isn’t filling up very quickly. Small twosomes chat over the rims of plastic cups, lone wolves lean up against walls to check their phones, and a younger group of kids dance their way into the venue—makeup and glitter a-go. However, after about an hour, Dub Thompson takes up the stage and the dancefloor is officially crowded. The show’s on track.
Dub Thompson is a younger group out of Southern California who are wonderfully unpredictable. They’re sometimes funky, sometimes metal, sometimes pop and sometimes just straight-up abrasive, but it works. Co-frontman Evan Laffer introduces the band like a campy, self-aware TV show host on daytime television. Starting with the song “No Time,” Dub Thompson skates with dual synthesizers and a thick bass sound. Lead vocalist Matt Pulos chants, “Baby you’ve got no time for loving,” with delay-heavy screaming and hypnotic repetition.
The band’s energy is aggressive and fun. The drums play strong beats that give an amount of insistence to their eccentric instrumentation. During “Dog Races,” Pulo picks up a guitar and strums a fierce wash over the fuzzy bass line. To me, they sound like Rage Against the Machine would if they spent more time listening to British New Wave. As a younger band, their sound is chaotic and still in its raw stages. However, they provide a cool glimpse of sharpness and sonic sobriety in the age of Chillwave and ’80s dream-synth revivalism.
“You can pick up our album at the merch table,” Laffer says after their set is over, “r, you know, on the Internet: where it’s free.” A handful of people rush to pick up their recent (and aptly named) release, 9 Songs, as Dub Thompson take up their gear. By now, Urban Lounge has accumulated a sizeable amount of people, which continues to rise. The venue grows steadily louder with the excited banter of music-seekers as different members from Foxygen tune their guitars and check the microphones.
After a brief intermission, the green room doors open, and out come all nine members of Foxygen: six guys in informal suit-jacket combinations and three women wearing black, glittering dresses. Immediately, they sound straight out of another decade. Starting with the song “How Could You Really,” lead singer Sam France dances around the stage like a flowerchild preacher while guitarist Jonathan Rado plays an electric solo on top of the stage’s speakers. The three female singers harmonize to France’s lyrics and dance like soul-singing trios from the ’60s: complete with power hands and synchronized shoulder swinging. It’s a show.
During “On Blue Mountain,” France takes off his shirt when the song picks up, and becomes a skinnier look-alike of Iggy Pop as he relentlessly paces the stage and reaches out to the crowd. After only about four songs, the temperature in the room has risen by 10 degrees from all the dancing. Foxygen plays mostly songs from their newest album, …And Star Power, which means things are getting weird. Typically, the band plays about a minute of a recognizable tune and then ups the energy and noise until it becomes a barrage of rock n’ roll soup. But still, the beat is discernable, so we dance like hellions into oblivion with them. My ears sing.
Out of nowhere, “Shuggie” and “Cannibal Holocaust” bring us back down. The slow, easy pace of these songs catches me off guard, and I fall back into their groove. At times, I think Foxygen sounds like The Velvet Underground, and then definitely The Rolling Stones, and, no, David Bowie, or maybe The Rocky Horror Picture Show. They’re hard to pin down, but then I remember the title of their new song “Can’t Contextualize My Mind” and I shut up about all that. The beauty of Foxygen is that they dissociate all of these bands from their place in time, and essentialize their early glam influences into a kind of accessible spirit or school. It suddenly strikes me as strange that rock n’ roll is now old enough to have competing traditions. I remind myself to dance.
Foxygen finishes their set with “We are the 21st Century Ambassadors of Peace and Magic” and follow it with one of my favorites, “Everyone Needs Love.” The crowd is screaming for all nine of them to come back onstage, and when they do, the band skips from the green room with open arms. Foxygen jumps back in to wrap things up with “No Destruction”  and a very triumphant “Teenage Alien Blues.” Exhausted and thankful, the audience applauds them earnestly as the band wishes us all a good night.
As I leave Urban Lounge, I hug a few friends, put Foxygen’s music back into my headphones, and drive home on a rainbow. Next time Foxygen come through town, let’s rent a time machine. Let’s send love into space with the shitty antennas on our radios. Let’s buy a van and fix it up ourselves. Let’s start a band. Let’s boogie.
Photos: