A restaurant producing a skate video is a strange idea to wrap your head around, but it totally makes sense when you look at the crew that works there. “Every skater who has a full part in the video also works at the diner,” Joe Mandl, co-owner of Blue Plate Diner let me know at the beginning of the night. 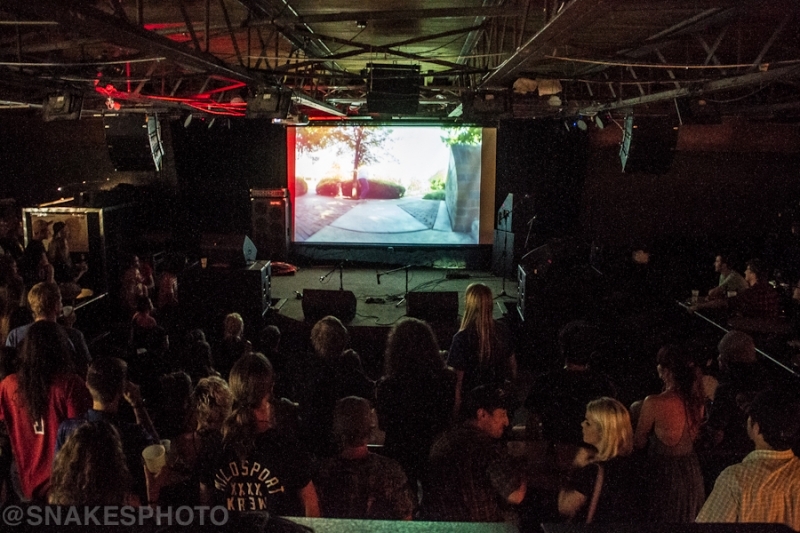 A restaurant producing a skate video is a strange idea to wrap your head around, but it totally makes sense when you look at the crew that works there. “Every skater who has a full part in the video also works at the diner,” Joe Mandl let me know at the beginning of the night. Mandl is the co-owner of Blue Plate Diner and readily supports the habits of his workers. Although, if his busboys filmed themselves doing basketball trick dunks or played the soothing sounds of the harp, I doubt it would fill Urban Lounge on a Sunday.

Heavy riffs and jumping down stuff is a safe bet if you want to draw a crowd. This is exactly what was promised with the line-up. Starting out the night thrashing, Cornered by Zombies had people bobbing their heads aggressively before the video. The guitarist gave an ear-to-ear grin before a breakdown that would have sent everyone into frenzy if the crowd on the dance floor was a little more packed. They gave out the energy of a five person band even though they are just a duo. Think, The Black Keys if they grew up only listening to Slayer.

After the band, it was time for the video premiere. The intro had clips of backyard ramp sessions, life behind the counter at Blue Plate and good-old fashioned street skating at local spots. The filming and editing highlighted the fact that the crew doesn’t stop hanging out when they close up shop at the diner. This is all thanks to Eric Jenson and Weast Films, who helped turning a lofty pipe dream into an actual skate video.

The first part went to Levi Faust, a local ripper who loves candy as much as he loves ledges and tranny. He pulled off a nosegrind on a sign that is about five inches long, and could very well impale you if you aren’t on point. Sam Hubble is no stranger to filming parts for local companies, and he lived up to his reputation in his part. I have seen this dude in videos since the Random Lurkerz days, which were the first local videos I had exposure to. Hubble has been progressing since then and has been keeping it local instead of moving to California like so many amateur actresses, pornstars and skateboarders have done to try and get their big break. Most of them end up working at diners anyway.

My bladder was full at this point, so I rushed to the restroom which made me miss the next guy’s name. He had some cool no-comply stuff, you rip bro. Holland Redd is no stranger to SLUG and has had the cover of the mag in the past. His part lets you know that he isn’t scared of handrails and goes full force when skating. Some of his more memorable tricks were: a wallie gap and—to my knowledge—an NBD on the Delta Center rail (I don’t care if it’s called something different). I can’t mention what the trick was because it was too nasty and I’m afraid it might get censored.

After a lengthy art sequence that incorporated a ledge, an old school phone, fireworks and calling out Spike Jonze’s name around twenty times, the video transitioned to the ender. At the beginning of the night my thoughts were that Holland would have the ender, but I forgot that Sean “Dirty” Hadley was also in the video. I guess this guy poops his pants from time to time, but that’s none of my business. No matter what the contents of his pants, Hadley showed the content of passion he has in his heart. Switch pole jam 360 is all I have to say about his part, go buy it!

Once the video ended, local bands Red Telephone and God’s Revolver played for the crowd. All of the bands also have members that work at Blue Plate, which made for a nice locals only night. If you missed the premiere, you blew it and your significant other wants to tell you but they don’t know how to bring it up because you have been ‘on edge’ lately. So, please head down to Blue Plate one of these days, get some comfort food and buy the video. Hopefully after that you will be able to relax and fix your relationship with your loved one. We really miss the old you.

Much thanks to all the sponsors for the support and the free product that was given out: SLUG, Milosport, Blindside, SK801, Heel Bruise, Mizu, Filament and Saga Outerwear.

Check out photos from the event here.