00:00 / 18:49
Spotify Stitcher
RSS Feed
Share
Link
Embed
It was a Friday night, and while everyone in Salt Lake City of my demographic was preparing to spend the night out dancing at Urban or sipping cocktails at Bodega, I was headed to the long lines that branched out from the entrances to the Energy Solutions Arena—with my mom—to see Josh Groban. 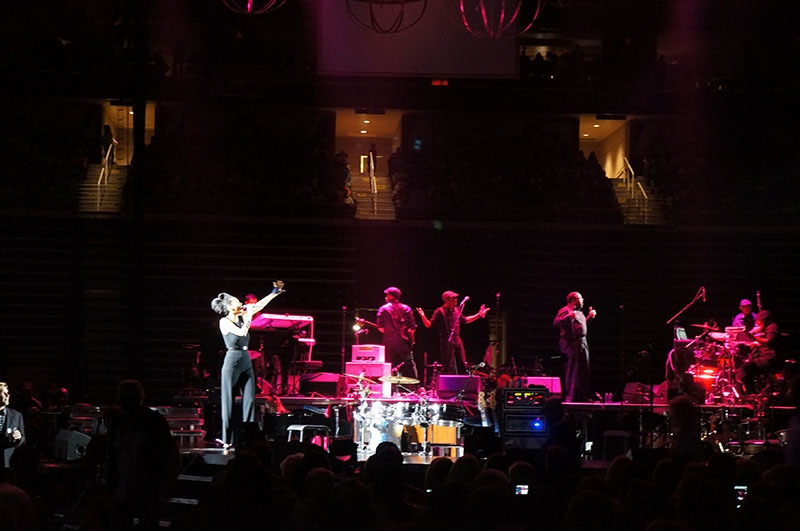 It was a Friday night, and while everyone in Salt Lake City of my demographic was preparing to spend the night out dancing at Urban or sipping cocktails at Bodega, I was headed to the long lines that branched out from the entrances to the Energy Solutions Arena—with my mom—to see Josh Groban.

Actually, my mom was joining me to hear a live rendition of “You Raise Me Up,” but I was there to witness up-and-coming solo artist Judith Hill, who was the opening act. Apparently she was a fixture in a TV show called “The Voice,” but I don’t watch anything with a voting cast or announcer that isn’t an SNL sketch, so my familiarity with this talented vocalist was through the Sundance film “20 Feet From Stardom.” Though it was on my Sundance list, I didn’t catch it until this summer, when it showed at the Broadway, and it was hands down in my Top 5 favorite films of the year—definitely Top 3 documentaries. It catches up on the careers of a handful of notable back-up singers for the likes of Stevie Wonder and The Rolling Stones, and Judith Hill was probably the youngest of the group as a former back-up singer for Michael Jackson before the gig was cut short by his death.

The film uses the stories of older back-up singers to illustrate how these extremely vocally blessed artists, though they often contain leagues of talent over the person standing center stage, often fail at solo careers for a variety of reasons that conclude in, “You just don’t have the right look.” Hill is the beacon of hope in the film: Beautiful, experienced but young, and with a rich, soulful voice that won’t stay in the shadows.

Hill stepped onto the 360-degree stage (this concert was “In The Round”) dressed in a classy black pantsuit and a big rockabilly-style loop on her head—she looked elegant, and considering today’s pop standards, it’s a great compliment. Sitting down at the piano on one side of the stage, she played a few chords and started into a heartfelt song. I couldn’t help comparing her vocals to Mariah Carey … They have a similar raspy cadence on those high notes, though Hill’s voice is a little lower and silkier. Her set was a short five songs long, but each one was like biting into a chocolate bar, and though the songs played it safe––the average age of the audience was probably 50, and I’m not exaggerating—there was a little funk that seeped through, and she even sang into an auto-tuner at one point (that ‘90s revival shit always gets me).

I was left deeply unsatisfied as she walked off the stage, though, to my delight, she returned during Groban’s set for a couple of (cliché) duets. She has a debut solo album coming out soon, and I hope it’s a success—her talent deserves to make it big.

Waiting in line earlier in the evening, I had explained to my mom that I’d be in the photo pit for both sets during the first few songs (not realizing that the setup was actually a mile away from the stage, and required a giant zoom lens if any kind of worthwhile pictures were to be taken). Her reply, and I write this verbatim, was, “He’s going to fall in love with you.” It’s what any good mom would say when she finds out her daughter might be in close proximity to Josh Groban … right?

He did not fall in love with me, nor I with him, but I realized at that show that Josh Groban is the dirty paperback novel of the music industry. Wearing a sports jacket over a white v-neck with white Converses and that shaggy haircut of his, Josh Groban ran onto the stage as a bunch of senior citizens screamed like he was a Beatle.

I won’t go into detail, ‘cause no one but the thousands of middle-aged Mormon moms and 70-year-old men in attendance are going to care (and they don’t read SLUG unless they’re my mom), but his performance was what I expected, with the addition of a low-key stand-up act. He seriously told jokes and/or a story between every song. It was cute, and exactly what everyone wanted.

What I can definitely commend Groban on are two details that actually made me respect the guy despite his obvious pandering to the little old ladies with crushes: His band was absolutely fantastic, and he not only let them shine through extensive solos, but he also introduced them all; and he utilized a bunch of local elements, which included donating to SLUG’s favorite youth organization, Spy Hop. Someone who fills the Energy Solutions Arena doesn’t really have to give a shit about anyone, but those human touches make him a pretty likable dude, whether his music is good or not.

Overall, it was a great night, and I got to see some extremely talented musicians and watch my mom get excited about her first concert in 30 years. Sometimes it’s nice to step out of your scene and into someone else’s.