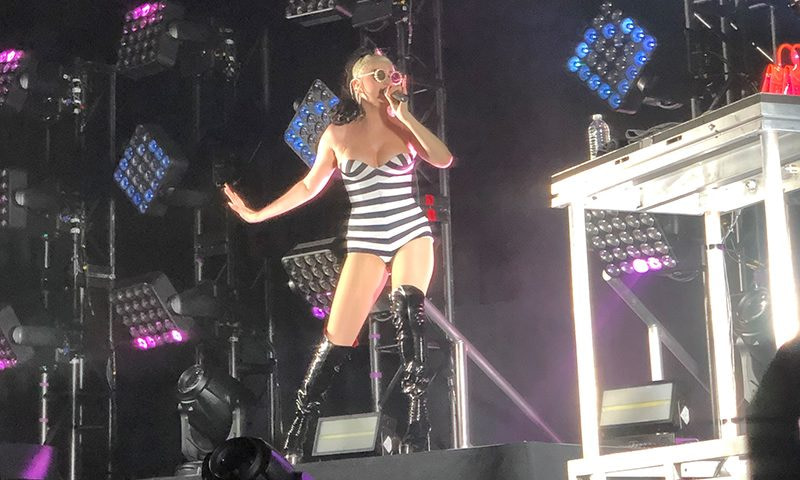 Despite the bad air quality and how cold it was on the night of Dec. 5, it was the first time Kim Petras has held a concert in Salt Lake City. Coincidentally, it was also the second-to-last show on her Clarity Tour. The Clarity Tour is Petras’ second headlining tour, and with shows in 23 cities, these have been the biggest concerts she’s done so far.

DJ Alex Chapman, one of Petras’ best friends, opened and got the crowd going with a variety of songs that ranged from “Potential Breakup Song” by Aly & AJ, “Misery Business” by Paramore and even a sick EDM remix of Mariah Carey’s iconic “All I Want For Christmas Is You.” The crowd grew louder with excitement and sang louder with each song he played as we all waited for Petras to arrive.

Dressed in a black dress with white ruffles at the bottom and black knee-high boots, Kim Petras started her set with track “Clarity.” Her vocals were impressively strong and sounded better than her recorded tracks. However, there were moments where the backtrack vocals would drown out her live singing, making it feel as if she wasn’t fully using her voice. “Meet the Parents” and “Got My Number” were played before Petras left the stage and changed into her second outfit of the night.

“When interacting with fans from the stage, Petras was nothing but genuine with everyone.”

Petras stepped out in a black and white striped bodysuit, round glasses with pearls that outlined the entire rim and, last but not least, another pair of knee-high boots. It was my favorite outfit of the night, as it gave me Cruella de Vil vibes and reminded me of the original Barbie in the striped bathing suit. When I think of a popstar, Kim Petras fits the picture. With the six outfit changes that took place over the course of the night, the choreography, the lights and the poses, her concert truly felt like a Thierry Mugler fashion show.

When interacting with fans from the stage, Petras was nothing but genuine with everyone. She would yell back that she loved her fans whenever they yelled that they loved her from the crowd. She shared that she was once a Charli XCX stan before she got her own stans. She sang a cover medley of “Unlock it/Click” by Charli XCX and once that song was over … it was Halloween time.

Crosses appeared on the LED light panels and slowly turned upside down as track “Purgatory” ominously played throughout the venue. This was one of my favorite moments from her performance, as she stepped out in a gold corset accompanied with the signature knee-high boots in gold and a single long braid. The track transitioned into “There Will Be Blood.” It was the first time she stepped onto her turntable where she would pose and dance as she spun around while singing.

“Halloween may be over, but I don’t give a fuck!” Petras stated as she sat on the stairs before performing six more tracks from TURN OFF THE LIGHT with one more outfit change in between it all. She came out in a red bodysuit with red knee-highs as she performed “Death by Sex” with a seductive manner as she sang at her turntable. The way her stage was set up made it feel as if I were in an arena because of how many props she had. It reminded me of a Britney Spears concert in the early 2000s when her pop career first started.

“If anyone knows how to put on a show, it is Kim Petras.”

The crowd’s energy never died down. Even when Petras came on stage to perform an acoustic version of “Human” by The Killers, the crowd still buzzed with happiness and excitement. The hall was quiet as Petras’ voice filled the venue as producer Aaron Joseph. A moment after this, Petras took off the shirt she was wearing revealing a nude dress that had sparkles and gems all over it. She then threw the shirt into the crowd and proceeded to shout “fight, fight, fight” in a playful manner. She then announced that one of the two people who caught her shirt could easily buy the same shirt at the merch table which to me, was the funniest moment of the night.

Petras ended the night with a two-track encore. She performed “Heart to Break” and “Sweet Spot,” and the crowd sang their hearts out to both songs. In the final moments of the last song, Petras had the crowd shouting “woo-ahh” back and forth, which happens to be a signature statement that can be heard in her songs. It was the staple of the night and an amazing way to end the show.

If anyone knows how to put on a show, it is Kim Petras. She came and delivered. The setlist was filled with new songs and old songs. Her vocal range carries better live and her stage presence is what a popstar needs to have to be a popstar. With the success of this tour, I hope to see Petras come around again on her next headlining tour. –Kimberly Portillo

Getting to Clarity with Kim Petras
Review: Tempers – Private Life