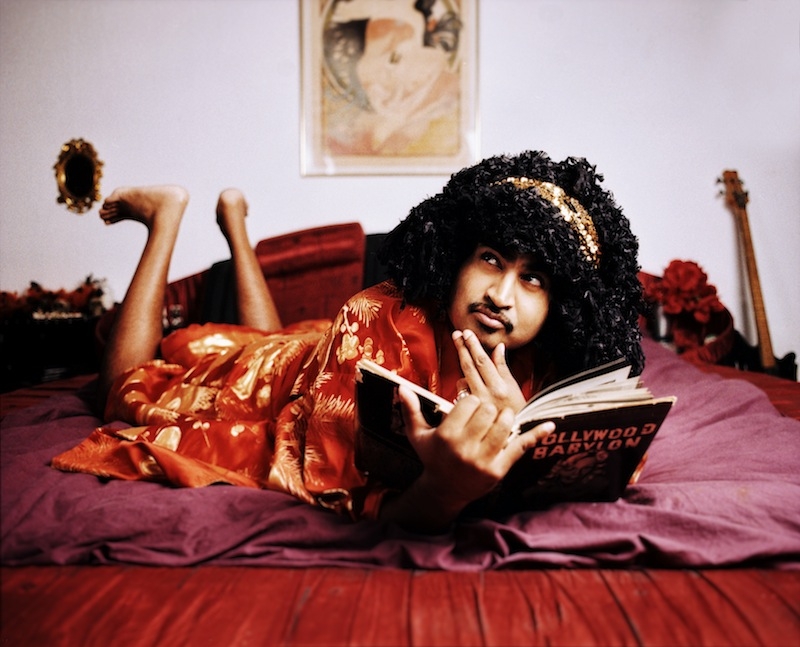 Sunday, for many, is the day of Sabbath. A day that requires sitting on wooden benches and listening to the word being preached for one’s salvation. While I am not quite one for wooden pews, Urban Lounge’s dive-like atmosphere is perfect for the faith of one such as me. Arriving early to the sound of James Brown playing over the speakers, I grab a beer and prepare for the church of soul to begin. Tonight’s preacher of the rock n’ roll gospel is the King Bama Lama Khan Emperor of RnB, aka King Khan and The Shrines.

Opening for this evening’s sacrament is Mr. Elevator and the Brain Hotel. They waste little time—after a brief introduction, they launch into a psych rock barrage. Providing a unique intensity, defined by the prominent organ-like sound from the keyboardist. At first the crowd seems passive to this display, but the keen interest is more than visible to the casual observer. This group gives an upbeat performance, leaving one feeling as if they were on cloud nine after each number. Their last tune starts off with a haunting sound that transitions into something close to a swampy type of rock n’ roll. The vocals on this song however, seem to stand alone against the instrumentals—not really adding to it, but then again not really taking away either. This finale keeps the listener hooked, leading one on until the emphatic drop of the sound that leaves a noticeable buzzing in the ears.

King Khan gives an introduction for his friends in Red Mass, inviting the loose-knit crowd to come closer to stage. Appearing satisfied that enough people have come onto the dance floor, Red Mass launches into their rock n’ roll frenzy, which does nothing short of inspire the audience to move toward the front of the stage. Their sound represents the spectrum of different styles of garage rock, borderline ‘80s post-punk and notable touches of heavy metal. Changing it up with almost every song, they keep their crowd hooked. Even with the risk of a slight hic up during their act does not diminish the energy being blasted out. This is furthered by the combination of the harsh, bluesy vocals, pronounced bass and heavy guitar riffs that make this performance solid.

Red Mass range is more than clear when the female vocalist takes the lead. The atmosphere changes into a sort of electronic dance party when she wails out on the number “Sharp.” The audience’s appreciation of this raw display is clear, as they move about to the beat, which remains consistent throughout, keeping this party going. Their conclusion consists of two additional songs. This extra performance keeps the crowd enthusiastic and thoroughly entertained. This excitement is especially highlighted when the sax player from King Khan and the Shrines joins in and Red Mass’s guitarist jumps onto the dance floor and shreds on his guitar, driving the surrounding spectators into a flurry of excitement.

Waiting in-between sets for King Khan and the Shrines to perform tests my ability to remain calm. I’ve been waiting for this moment to arrive for months. One can cut the feeling of anticipation in the room with a knife. When they finally kick off into their intro, it inspires the audience to bring all attention to the stage and the dance floor to become jam-packed. At last when the headdress adorning Khan takes to the stage it is a clear sign that all hell is about to break loose.

King Khan and the Shrines explode into their raw garage-soul frenzy. Blasting out numbers like “Pickin’ Up The Trash” and “Thorn In Her Pride,” the assembled crowd is invoked to twist, shake and groove. Participation is a must for this kind of music and those not getting down to these tunes represent a minority of tonight’s attendees. Though the songs are mostly all upbeat, many of them carry a certain socially conscious weight. During this wild performance Khan takes time to dedicate songs to promote awareness for social causes, like that of the transgender community “I Wanna Be A Girl.” As well as specially consecrate “So Wild” to his late friend Jay Reatard.

After a quick costume change, Khan takes the stage for the encore wearing a wig, holding his guitar and adorning a red cape. Performing the funky, R’n’B filled number “Born to Die” to enjoyment of the audience. There last song “Shivers Down My Spine” allows for a slow and haunting transition into the conclusion of this evenings holy spectacle. Though, I’m sure I could have gone all night twisting and shouting. For the time being my souls need for the rock n’ roll gospel has been satisfied. At least, until I get home and put on a record.