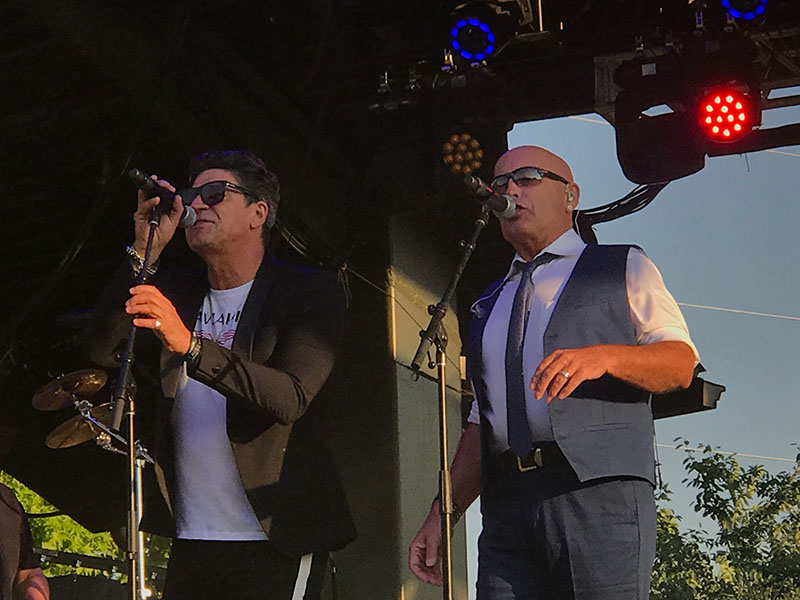 It begins with a glorified cameo as Farrington & Mann (the original vocalists from When in Rome U.K.) take the stage just long enough to play bits of “Heaven Knows,” a second track I don’t recognize, and an extended version of “The Promise.” The sound mix is something of a mess that eventually sees the low end of Clive Farrington’s disappearing for the entirety of “The Promise.” Their biggest hit sounds like it is being performed in a tin can, and then they’re gone.

This is followed by a changeover for the Naked Eyes that takes longer than the amount of time that Farrington & Mann were onstage. I understand that When in Rome weren’t exactly an act with a deep catalog. I passed up buying their album in favor of picking up The Promise 12” single, but surely carrying around a four-piece act that only plays for 15 minutes isn’t economically savvy.

I remember buying The Best of the Naked Eyes on CD at Starbound Records (along with a white label 12” that purported to be The Cure–related, but didn’t turn out to be all that interesting). I’ve always considered them the less interesting version of Soft Cell, which isn’t exactly fair, but when you are a synthpop duo, with Pete Byrne on vocals and Rob Fisher on keyboards, you’ll inevitably be compared to Marc Almond and David Ball or one of Vince Clarke’s projects.

Fisher passed away in 1999, leaving Byrne to carry on alone.

Byrne, dressed in a suit coat, scarf and acoustic guitar, is an amiable musician. He tries to engage the audience with little success. “Promises, Promises” gets a few people on their feet. A few more stand for “Always Something There to Remind Me,” which features an acoustic intro and outro with the original electronic version placed in between, but a general sense of apathy seems to be the mood of the crowd.

Maybe it’s the heat, or that we were suddenly realizing how spoiled we were by the Retro Futura Tour a few weeks before, where the use of a backing band for the first three acts allowed the artist’s sets to be longer and seamless. Tonight, any momentum built up by the end of a band’s set evaporates before the next act can tune their instruments.

Naked Eyes are followed by Wang Chung. Outside of compilation appearances, I’ve never owned a Wang Chung album. I’m certainly familiar with a few of their tracks like “Dance Hall Days,” “Everyone Have Fun Tonight” and “To Live and Die in L.A.,” but was indifferent to their inclusion on the bill. I’d never seen them, so I could at least add them to a rather long list of bands that I have seen live in my lifetime.

Wang Chung are, without question, the best act of the night. As guitarist/singer Jack Hues and bassist/singer Nick Feldman wake up the crowd with an energetic set that includes all the hits you’d expect, along with a cover of “Girls Just Want to Have Fun” sung by their drummer, who apparently has Utah roots. It proved to be an effective intro for “Everybody Have Fun Tonight.” Oddly enough, it was the second night in a row to feature the song—Panic! At the Disco had also included it in their set.

What set Wang Chung apart from the earlier acts was their ability to simply cut loose, have fun and embrace the fact that they sound like the quintessential house band from an ’80s teen comedy. There’s not a lot of depth to “Let’s Go” or any of their other hits, but Hues and Feldman were clearly enjoying the opportunity to revisit their past, rather than begrudgingly taking part in a touring festival when they’d prefer to be sitting on a throne in a castle on the hill counting their gold. Their attitude and energy were infectious.

You could say the same thing for the night’s headliner, A Flock of Seagulls. Unfortunately in this case, it was the general lack of energy and a sense of disinterest from vocalist/keyboardist Mike Score (the only original member), who spent the evening barking out the songs while bassist Pando awkwardly tried to engage the crowd. The set included “Nightmares,” “Modern Love Is Automatic,” “The More You Live, the More You Love,” “Space Age Love Song,” “Wishing (If I Had a Photograph of You),” “Telecommunication” and “I Ran,” all the songs I would have requested, but it all felt lifeless. It was cool to see touring guitarist Gord Deppe (half of the Canadian new wave group Spoons) tear through original guitarist Paul Reynolds’ classic riffs, but Score’s apathy was met with an audience that decided it was time to ignore the band, take photos of themselves and prepare to go home.

When A Flock of Seagulls left the stage, there was little more than a murmur and a spattering of applause. The band apparently felt the necessity of playing an encore and quickly returned despite the tepid response from the crowd. Half of the audience had already packed up and were bottlenecking at the gates.

I have never in my concert-going life witnessed a headliner shrugged off in the way that A Flock of Seagulls were. In all fairness, the crowd was never particularly interested in any of the bands outside of Wang Chung, but the lifeless nature of Score’s performance didn’t help.

When compared to the Retro Futura Tour’s show a few weeks ago, Lost 80s Live felt like amateur hour. It hasn’t always been this way. Many of the acts on this year’s Retro Futura Tour have played as part of Lost 80s Live at one point or another. Maybe the cream has risen to the top, leaving Lost 80s Live little choice other than to hit the road with what is left over. Still, one has to wonder why a little variety hasn’t been injected into the mix. Marc Almond hasn’t toured America in ages, Jay Aston’s Gene Loves Jezebel (not to be confused with the Gene Loves Jezebel that is Michael Aston and whatever vagabond musicians he can rummage up) released a new record this year and played only one U.S. date, The Alarm are touring medium and small venues, The Mission UK haven’t toured America since reforming with three of the original four members, and Roland Gift of Fine Young Cannibals is playing festivals in the U.K., as are Kim Wilde, Nik Kershaw, Jimmy Somerville, The Boomtown Rats, Wendy James of Transvision Vamp, and Heaven 17. Maybe Holly Johnson of Frankie Goes to Hollywood could be lured out to America.

I understand that the logistics of these kinds of tours can be a nightmare, but you’d think they’d be able to find a headlining act that wasn’t just going through the motions.

Most disappointing show of 2018? Yes, absolutely.