Mastodon @ The Depot 05.04 with Gojira, Kvelertak 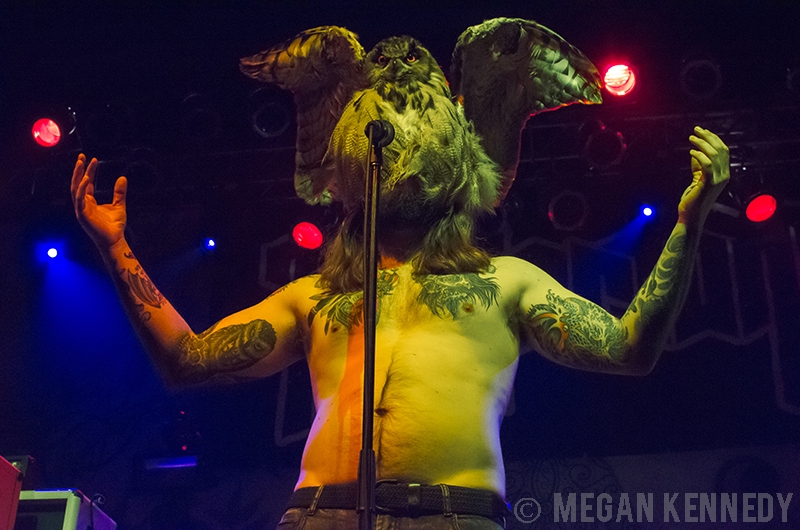 This owl is not what it seems. Photo: Megan Kennedy
I sure do love hitting up tours with great bands I’ve never seen live before, and such was the case for a rare Sunday night show at The Depot to catch Kvelertak, Gojira, and the mighty Mastodon. Shows at the Depot are always a wash for me. On the one hand, the whole place is beautiful, the sound is excellent and they are always very well organized when it comes to getting bands set up on time and such. On the other hand, the more mainstream atmosphere brings out the dude-bros who seem to rarely go to shows and thus are severely lacking on show etiquette, and getting a drink is never less than a twenty-minute commitment. The staff announced to the line outside that the band had requested the show be all-ages, which meant any drinkers were forced onto the mezzanine only, which just cemented my decision to forgo getting a beer that evening. I am also very clearly getting old, as I was stoked to see the walls were lined with stools where I could rest my weary bones. Sometimes, it’s just awesome to sit back and enjoy a sweet show.Kvelertak were first up, and they started right on time at 7:30 p.m.. I only have a passing familiarity with the band, but imagine my surprise and delight when the lead singer Erlend Hjelvik came out shirtless with a giant stuffed owl on his head. He ditched it after the first intro song, but it set the tone for their set: metal with a heavy rock n’ roll swagger. It was just fucking fun. The dudes clearly didn’t take themselves too seriously and it made for a really engaging energy, matching the feel of their jumpy sound, which seemed to be influenced by many different genres. Pretty much everyone but the drummer also had vocal duties at some point, which I like for the variation. The guitarists and bassist threw themselves around the stage and basically acted like their music sounded: upbeat and aggressive. It was a really phenomenal introduction to these dudes and did a great job of warming up the crowd.Sadly, I did not get to add Gojira to my list of photographed bands. Apparently the dude in charge “couldn’t find” any of the band members before their set to ask permission to shoot them. I had no idea Gojira was a free-range metal band; someone should stick some bells on them. (Or, you know, get this stuff nailed down in advance, but what do I know). So instead I just got to take in what was an overwhelmingly heavy 45-minute set from these amazing French bastards. What Kvel had brought in high-energy fun, Gojira matched in complete aggressive dominance. I’m not sure I’d go as far as to say their set was “better,” because the sounds and energy were just so different that it’s not an apples-to-apples distinction, but bottom line is, both bands brought their A game to our fair city.Gojira’s set was tight and polished, and got started the first mosh pits I’ve ever seen at The Depot. Vocalist Joe Duplantier was very active with the crowd and expressed his gratitude for their energy. The stage looked ten times bigger than it had the set before, with only four dudes instead of six taking up space, and Gojira’s more technical sound meant the band was not nearly as physically active as Kvelertak had been, but that didn’t matter—their music simply blew the roof off the place.There was a quick set change and new banner unfurled before Mastodon finally took the stage. Comparatively, they arrived like a slow-building storm, those first rumbles of thunder and drops of rain that seem unimportant and innocuous until you realize that they herald a hurricane. Bassist/vocalist Troy Sanders was definitely the most active of them, enjoying the stage space and stomping around while Brent Hinds blinded us all with his immaculate shredding. The light show was a swampy storm of blues and reds and really enhanced the drama of the stage. There was definitely a difference in energy from Gojira to Mastodon, but it wasn’t necessarily a bad thing. It was almost like Mastodon’s style just lends itself to the crowd being more attentive as opposed to actively jumping around and moshing. It was far more like being hypnotized, wanting to watch these unique and arguably gold-standard musicians perform their craft. They touched on pretty much all of their older albums, and even treated us to new tracks off the forthcoming album Once More ‘Round The Sun, which hinted at continued greatness from this reliably strong band.

A fucking strong tour, excellent sets from all involved—overall a fantastic night of metal.