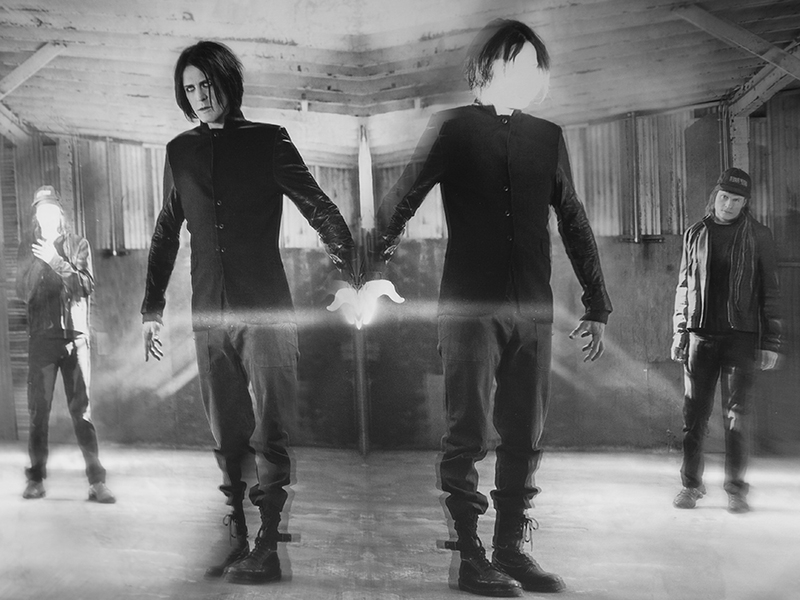 Huge, cavernous and with the worst floor in the history of forever, the Complex SLC played host on a rainy night to the largest gathering of people in black I’ve ever seen in Utah for this four-band extravaganza. Originally, the show was slated to include synth wunderkinder VNV Nation, but at some point, they dropped out and the slot went to former Skinny Puppy keyboardist Bill Leeb’s (Cyberaktif, Delerium) Front Line Assembly. Rivetheads across the country squealed like little girls receiving a birthday pony.

Even though both bands have long occupied the same dance floors and drawn the same fans, they have never toured together. No one ever thought it could happen, so it was no surprise that everyone who has ever Kung Fu’d around Area 51 or been nearly slaughtered on the Confetti dance floor by my husband (he says sorry, by the way) showed up to see this momentous event. I even spoke to several people who flew in from other cities for the show, and what a glorious night of noise, video and bodily fluids it was.

The old goths, rivetheads and punks were joined by a good cross-section of hipsters, older folks and cyber hippies. Held at an all-ages venue, the show was a chance for fans of all ages, and I saw many children rocking out during the show (and a few who, by the time the headliner played, had given up and were napping in parental laps).

The first rule of seeing Skinny Puppy at the Complex: Wear sensible shoes.

It’s sadly unusual to see women fronting industrial bands, so punky openers Youth Code were exciting for that reason. Unfortunately, although the reports from the fan community were overwhelmingly positive, I was left a bit cold by the “two people yelling over a synthesizer frame” performance. There was some keyboard fiddling and sampling going on in some songs, but I found it forgettable, although I had wanted to enjoy it. This is a band I’ll watch for the next few years, because I think they have the potential to be great. Perhaps being the smallest name on a four-band tour means you don’t get to bring much equipment. The second rule of seeing Skinny Puppy at the Complex: Even if you wear sensible shoes, your feet will scream at you long before the show is over. “This floor is mean,” said one woman I spoke to. The expanse of cement makes you almost miss the fact that the sound was mostly pretty good, although marred by some issues early on. Sadly, drinks are too expensive to let you take your mind off your feet. I thought it was my fault for wearing heels, but a couple of gentlemen in sensible shoes said no, they were in agony too.

German electronic industrial band Haujobb was up next, a set barely longer than Youth Code’s. It was an energetic performance for the short duration—a sharp, intense electronic assault on the senses that sadly was not helped by sound issues.

The third rule of seeing Skinny Puppy at the Complex: Just take off your shoes.

With the crowd at the front growing and getting more feverish, Front Line Assembly took the stage for a longer—but still short—set of gorgeous, danceable industrial, covering both older and newer tracks. Sadly, the crowd seemed less excited with the performance, completely shutting down all attempts to start a good mosh pit, while Leeb seemed somewhat unimpressed with the venue, the crowd or perhaps the whole situation. The music was perfect, but the energy was not where I hoped it would be. The huge stage seemed a little larger than the band was used to, and perhaps the extra space affected the emotion and energy. This was the point when I notice a lot of bare feet and socks. There’s no glass allowed in the Complex, so except for a little stickiness, the cold cement floor felt pretty good on sore feet.

The fourth rule of seeing Skinny Puppy at the Complex: You’re gonna feel that in the morning!

Finally, after a short wait, the main act went on. Skinny Puppy’s shows are always a cinematic experience. Many bands in the genre, which relies heavily on laptops, leave the performance to the electronics and don’t do much more than dance around. Frontman Nivek Ogre takes advantage of the space afforded by a lack of usual rock instruments—there was nary a guitar to be found all night, although Puppy does have a live drummer, Mark Walk—to turn the event into a political drama of vivisection, poisoning and torture. The Canadian band is currently in the news for invoicing the U.S. Department of Defense for $666,000 for using their music to torture Guantanamo Bay detainees and has long taken stands against animal testing, and their performance alluded to these issues. Ogre, as always, performed in a variety of masks and hoods (and a medical boot this time—he hurt himself just before the tour began, but it doesn’t seem to have slowed him down at all) and lurched around the stage, pursued by costumed roadies who pretended to inject him with radioactive chemicals and run tests on him in between performing usual stage duties like cleaning up goop and helping with onstage costume changes. They even fitted him with a sport camera, which is a new touch, and allowed him to project his close-up face on screens around the stage, overlaid with digital noise and found footage while cEvin Key, as usual, looked a bit bemused as he did the hard synth work behind the scenes.

With the sound issues worked out by the time the main act hit the stage (which really is one reason for opening bands), Skinny Puppy sounded great. They performed a good assortment of recent tracks and older popular tunes—including the ones used in the torture case. No one at the Complex was acting tortured (feet notwithstanding!) and the pit finally opened up and swallowed the crowd near the stage. Most reports were that the performance was nearly identical to the tour last spring, but even if the show was not that different from previous ones I’ve seen, it certainly did not disappoint.

The final rule of seeing Skinny Puppy at the Complex: Buy merch early, because before the decay has faded on the last song, security will bellow at you to get the fuck out.

After a short break, Ogre returned to the stage—sans costume, as he usually does—and, with a rant about Fukushima and cesium-137, launched into a two-song encore (two songs fewer than most cities got) ending on the classic Smothered Hope. Many fans at other shows reported that Ogre came out to meet and greet, but it wasn’t even midnight when the show was over, and the bar was already closed, and the staff immediately formed a shield line and started marching us out. Bands make most of their money on merchandise sales, but the staff barely let anyone even purchase T-shirts. I grabbed two hoodies and threw $100 at the merch guy inches ahead of the staff, and then out we went into a light snowfall. Everyone, I noticed, was limping.

Skinny Puppy and friends continue their tour through December 20 on the West Coast. Visit them online at http://skinnypuppy.com/, check out their latest album, 2013’s Weapon, and listen to them at terrorist detainment centers around the world.