While I loathe to bring it up, friends, there is a darker side of appreciation and collecting too, one that reared its nasty head when this icon and hero of mine cancelled his 2012 and 2013 tours, that had already been scheduled then cancelled then rescheduled and not once, but twice. Sometimes it takes an absence to be reminded why we love someone so much—clichéd as that sounds, it did make my heart grow fonder for the man. 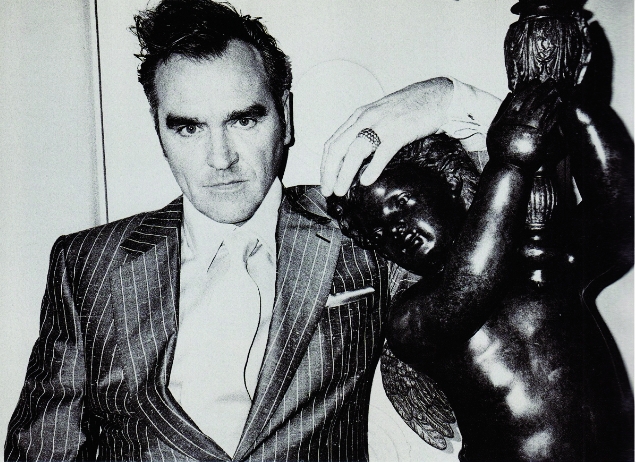 I consider myself to be a fairly huge Morrissey fan, collecting just about every piece of music I can get my mitts on, and—time and finances permitting of course—attending his live shows, purchasing books about and by him, like his recent publishing success that is Autobiography, collecting performance recordings, among other things. I would say I’m a loyal fan (and you can interpret that as you’d like) and generally laugh at his outrageous statements, knowing how truly humorous and witty he can be. And while I loathe to bring it up, friends, there is a darker side of appreciation and collecting too, one that reared its nasty head when this icon and hero of mine cancelled his 2012 and 2013 tours, that had already been scheduled then cancelled then rescheduled and not once, but twice. It may seem petty to complain about this now, but it wasn’t at the time.

And it isn’t that I had even questioned his reasons for doing so; actually just the opposite initially. An ill parent, followed by an acute medical condition, were explanations offered—and generously so, as Moz, ever the antithesis of modern celebrity, doesn’t often aérer son linge sale en public—and sympathetically accepted them no questions asked. Then came those outrageous photos of the too-sick-to-tour singer out at a Soundgarden (of all strange bedmates for Moz to associate with) show in L.A., coincidentally during the same week he had rescheduled to play Salt Lake and elsewhere—then subsequently cancelled for being too ill—and sadly that’s when I started to doubt my loyalty. It was the equivalent of what my own wise Irish mother would have called being a "chancer," which roughly translates "playing hooky then getting caught." The final proverbial nail in the coffin was that next final rescheduled show getting canceled. Just stopping short of changing the second letter “o” on my beloved “Moz Posse” t-shirt to a “u,” I was nevertheless severely disappointed and for a while—as painful as this is to admit—disinterested in the man and his music for the first time ever. (I know, friends, I know!)

Looking back now in hindsight, and with no real disrespect to the man—one of our generation’s most influential artists and one of its finest singers—intended, I think that some of this was purposely executed to garner support for first his publishing deal—never guaranteed to be successful—a documentary type concert film, and eventually a new recording contract. "Creating a buzz," they call it. Feel free to disagree but let’s face it, Moz would never go the traditional publicity route and while my theory is quite personal and therefore highly debatable, create a buzz he has, and spectacularly so. His critically acclaimed Autobiography was an instant best seller, his celebratory concert film played in theaters around the world before being released as his first Blu-Ray; and surely the most important thing from all of this: his finally singing a new recording deal with Capitol, under the Harvest Records label, for whom he has already produced an album, July’s World Peace Is None Of Your Business. And to say I am eagerly anticipating its release would be an understatement; I am thrilled. But mostly I am overjoyed by what all of this activity means: I can proudly state that I have (putting a spin/punk to one of my favorite of his songs) literally forgiven Morrissey!

Vocal powerhouse Kristeen Young opened the evening’s set. If ever there was a candidate for a Morrissey protégé, surely Young must be in the running. She has opened at his shows more than any other performer or group. She also has the distinction of being featured on two of his releases, 2008’s single That’s How People Grow Up as well as on “Sweetie-Pie,” the b-side to I Just Want To See The Boy Happy. Reminiscent in appearance of Nina Hagen, Young impressed not only with her dynamic vocal range but also her Jerry Lee Lewis-ish keyboard attacking. Her short set included highlights from her new Tony Visconti co-produced album, The Knife Shift, including “Pearl Of A Girl” and the bombastic “This Is War.”

Friday night’s show at Kingsbury Hall was highly anticipated. Sometimes it takes an absence to be reminded why we love someone so much—clichéd as that sounds, it did make my heart grow fonder for the man. The build-up from his eclectic mixture of video projections prior to his and his band’s stage arrival only heightened that feeling. I especially liked the Dame Edith Sitwell interview snippet, Nico at the docks and the Eno videos, as well as Chris Andrews’ "Yesterday Man" clip. But most arresting was the clip of Rex Jameson as his alter drag ego Mrs. Shufflewick, who also happens to feature on Morrissey’s drumhead for the evening. And soon after this montage ends, the house lights dim and a brief sample plays as Moz and his entourage enter to screams and after a brief greeting they launch into the Smiths’ classic "Hand In Glove," to the stupefaction of the audience. The show has really begun…

It must be an interesting process when an artist of Morrissey’s stature and longevity chooses a set list for a tour. With such a diverse back catalogue, not to mention a new album coming out, what (if anything) is the priority? Hit singles, album cuts, b-sides, covers or newer songs? Delightfully, "Glove" leads to Vauxhall & I’s epic denouement "Speedway," with its ripping guitars, thunderous drumming and those impassioned lyrics and vocals—the crowd (especially this fan) was blown away. A greener performer would likely have saved this for later in the set, if not the encore, but Moz and Co. know exactly what they’re doing: giving the people what they want. I am in shock (mainly because I had listened to it a few hours before) as the unmistakable start of the Ringleader era b-side "Ganglord" begins and confirms that this is anything but a regular concert set list.

Morrissey sounds absolutely phenomenal and there is something to be said about the razor precision and crispness in his enunciation. A frequent twister of his own lyrics, we are admonished in "Ganglord" that the clock on the wall is "making fun of you all," as opposed to the inclusive "us" from the original. He sounds energized, electric, inspired, and above all, fully restored. The time off from touring has rested those chords so that they sound brand new. Quieter and more confessional lyrics, like those from You Are the Quarry’s sempiternal "I Have Forgiven Jesus" or even Maladjusted’s valorous "Trouble Loves Me" make us all co-conspirators to the more personal side of his vast oeuvre. And therein lies part of his genius—the inclusion of the confessional and inner struggle of the lonely, that is missing from about 99% of most pop music. Perhaps unsurprisingly, these are two of my favorite tracks by the man, and I literally wasn’t expecting to hear them tonight.

It is this blatant avoidance of the big hits that makes this performance so memorable. OK, so Years of Refusal’s "I’m Throwing My Arms Around Paris" was indeed a single, but not nearly as successful by counts as the remaining one from this set: Viva Hate’s incomparable "Everyday is Like Sunday," and how glorious the longing of the latter sounded in the intimate environs of Kingsbury Hall. But before that we are treated to the first glimpse of new material, the title track from his new album. Newer and unreleased material is always risky in a concert setting, but fortunately he included two other teasers from it, the highlight of which was the brilliantly short ditty "The Bullfighter Dies." What I gleaned most from the newer material (which was rounded out with the flamenco-tinged "Earth Is The Loneliest Planet") was the ease of how it sounded familiar yet fresh at the same time. The night’s sole cover was Frankie Valli’s "To Give (The Reason I Live)," which was autumnal and reflective.

One of the other b-side surprises was Ouija Board, Ouija Board’s "Yes, I Am Blind," and the audience ate it up. This lead to the always epic showstopper that is "Life Is A Pigsty," which finds our maestro hitting his upper register as he pleads to an invisible force about falling in love regrettably in the "final hour" of his life. Piercing, highly dramatic and emotionally rousing, this has arguably become the centerpiece of his more recent tours. And again, a lesser talent would likely save this for the final track, if not for the encore, but our musical magician suddenly pulls out the next Smiths’ song, a stunning "Meat Is Murder." Here the stage back-drop goes from still imagery to gruesome films of animals being tortured. The lyrics perform a double-blow as he adds "kill, eat, kill, eat, it is murder!" with an effective grandeur unmatched by any of his peers. It is as powerful as it is alarming.

Ably backed by a tight group of musicians—including longtime conspirator and musical director extraordinaire Boz Boorer—the music never drowned out Mozzer’s rejuvenated voice. Some of the more interesting instrumentation added little flourishes to "Paris" and "Pigsty" respectively and it was impressive to see Boorer frequently change guitars mid song. Also of note is the welcome return of Matt Walker to the posse, whose epic drumming was excellent throughout the evening, especially on "Speedway" and the aforementioned "Pigsty." Ever the British Music Hall jester, Mozzer elicited several humorous moments, making comments on the Royal Family, watching American television and responding to audience cat calls once or twice.

If I confess any complaints, there is only one and it is minor: I wish the set had been a bit longer. As far as selections go, I have no right to bitch, as to bring that up I could give you at least 35 tracks I wish he’d have played off the top of my head. What he actually played far exceeded my personal expectations, including "I Know It’s Gonna Happen Someday" from his recently remastered classic Your Arsenal. Speaking of inspired selections, one the grandest moments of all came during the start of the encore: "Asleep." With minimal backing and even the toy piano part that highlights the Smiths’ recorded version, Moz held us all enraptured, conveying the song’s natural isolation and pathos and by delivering one of his most delicate readings of the entire set. It gave me chills. And even after he gave us his final appearance of the night and exited the stage, while his great band continued to jam to the semi ironic "One Day Goodbye Will Be Farewell," we were left satiated, appeased and awed by perhaps his most impressive feat of all: leaving us longing for the next time.