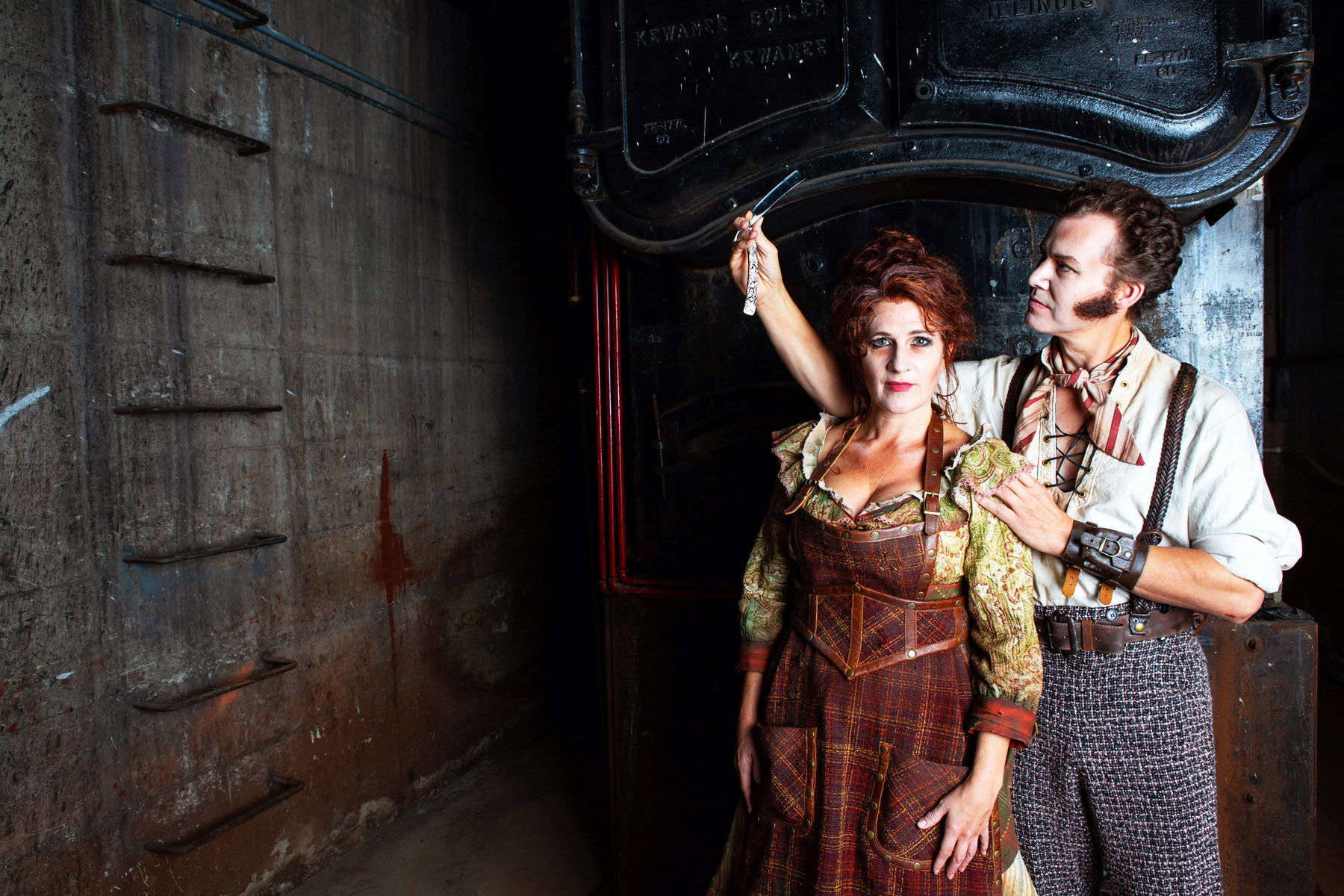 The Music of Mayhem and Murder: Pioneer Theatre Company’s Sweeney Todd: the Demon Barber of...

All the way back in 1979, before the crass irreverence of The Book Of Mormon, and before the inventive genius of Hamilton, a deranged musical about revenge, murder and cannibalism debuted on Broadway to rave reviews and audiences that were easily converted into throngs of fans. With Steven Sondheim’s brilliant song writing and the book written by Hugh Wheeler, this tall tale from the penny dreadfuls becomes  more ghastly and bloody than anything that had treaded broadway’s boards before. After winning eight Tony Awards, it was clear that this marked a groundbreaking change and that musical theatre would never be the same. Many of you may know the film version by Tim Burton in 2007, but as entertaining as it was, there’s nothing like spending an autumn evening enjoying the enchanting songs and stagecraft of a live theatre performance. Pioneer Theatre Company has committed to giving Salt Lake audiences a scare, a laugh and, a song with their production of Sweeney Todd the Demon Barber of Fleet Street.

Our story begins with the return of Sweeney Todd to London, where he used to be known as Benjamin Barker, and was wrongfully convicted of a crime by the malevolent Judge Turpin, who out of desire for Barker’s wife, sentenced him to life in a penal colony in Australia. After his escape and rescue at sea, he returns to find his daughter, the only remnants of his old life, practically imprisoned in Turpin’s house under the perverted guise of adoption. Sweeney then sets himself on a coarse of bloody revenge is accompanied by the eccentric, pie shop owner Mrs. Lovett who, while carrying a torch for Sweeney, encourages and assists him in his song filled slaughter.

Certainly one element completely absent from the Burton film is the ensemble chorus who aren’t quite acting as narrator, but fill in and bookend the presentation. Because no single character is pulling focus during these numbers, you really get the sense that this is the dark streets of Victorian London seething with unsatisfied rage and undeniably convinces the viewers that this is the perfect setting for the story of a murderous barber. Throughout the performance they transform from subdued, haunting choir to a near-riotous, shrieking mob.

Sweeney, as portrayed by Kevin Earley, is depicted more as a physically imposing brute than the pale ghoulish figure he has been in the past. I thought of Earley’s performance as closer to what it might be like if Hugh Jackman had taken on the role. There’s a weight to this version of Todd that I’ve never considered before: a sense that he had been beaten down by life and instead of the demented and unhinged lunatic, we get something more tinged towards the tone of Charles Bronson in a revenge movie. Earley’s vocal ability is as powerful as his physicality. He and Joe Dellger (Judge Turpin) dazzle in the number “Pretty Women” as both motivations of cantankerous rage and sexual fantasy dance around each other. It’s in the song “Epiphany” that the weight of his agony can be felt as he reaches the conclusion that we all deserve to die.

While Earley more than affectively holds down the center piece of this exhibition, the role of Mrs. Lovett is the role I’ve always thought of as the more difficult undertaking. Yes, it’s Sweeney’s bloodlust and throat slitting that are the spectacle, it’s Lovett that bares the emotional toll. She’s able to sell her wanting affection towards the gruesome barber, while also acting as the main source of comic relief, and adding in her own grisly actions makes for a complex character that Anne Tolpegin pulls off exceptionally well. Juxtaposed against Earley’s relatively dry, straight-man: Tolpegin is comic bliss and forlornly pitiful in her chase of Todd. A part previously played by theatre icons such as Angela Lansbury and Patti LuPone, the bar is at a lofty height, but Tolpegin is marvelous as this courtesan of killing. Her rendition of “A Little Priest” is devilishly playful, as is her performance of the misguidedly optimistic, “By the Sea,” where she sets out her delusional plan to live happily ever after with the butchering barber.

The sub plot is about a young sailor, who saves Sweeney at sea and falls in love with his sequestered daughter and spends the duration of the play trying to set her free and elope with her. It’s a little weird, as they barely know each other. It’s fun as filler, but doesn’t really make any where near the impact of the main plot. Sweeney himself seems way more concerned with revenge than actually reuniting with his daughter, but ultimately, the plots intertwine and any short comings are minor in the overall viewing experience.

The perfect way to celebrate the fall season as we transition from summer’s roaring blaze to the last few dying embers of the year is seeing a morbidly, macabre musical that contains as much black humor as it does red blood. Pioneer Theatre Company has pulled out every stop for this production, that runs through Nov. 10, and it is not to missed.