SLUG Mag Soundwaves
Episode #403 – Mykah
00:00 / 21:59
Spotify Stitcher
RSS Feed
Share
Link
Embed
A sleepy suburb in Utah County, somewhere south of Provo, is not where one would expect to encounter one of the great gothfathers. And yet there we were on a strangely muggy Friday evening—40 or 50 folks folks, mostly middle-aged and bearing the unmistakable marks left by a youth spent (but not misspent) pursuing music on the left of the dial, along with a few kids wearing t-shirts for reunion tours of bands that formed when I was their age, sitting ringed on the tasteful beige carpet around David J Haskins.

One Sorted Affair: An Intimate Evening with David J 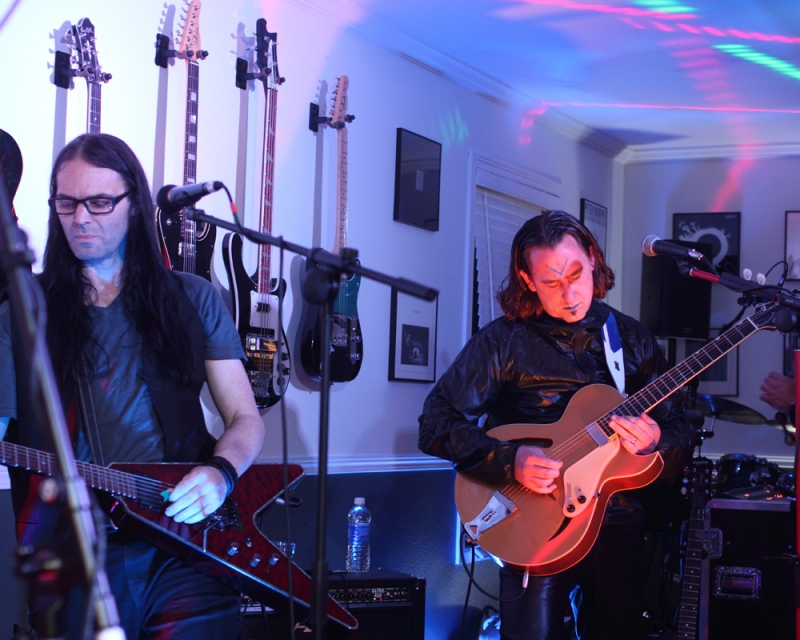 A sleepy suburb in Utah County, somewhere south of Provo, is not where one would expect to encounter one of the great gothfathers. And yet there we were on a strangely muggy Friday evening—40 or 50 folks folks, mostly middle-aged and bearing the unmistakable marks left by a youth spent (but not misspent) pursuing music on the left of the dial, along with a few kids wearing t-shirts for reunion tours of bands that formed when I was their age, sitting ringed on the tasteful beige carpet around David J Haskins, the man who penned Bela Lugosi’s Dead.

J is currently touring in support of his newest album, An Eclipse of Ships, which he funded with Kickstarter, that great crowdsourcing tool that’s helping to bring art directly to its supporters. Peter Johns of Intra-Venus and the Cosmonauts—who also opened the show; more about them in a moment—purchased a living room show perk and I was lucky enough to be invited to cover the show. While driving to Springville through rush hour traffic on a Friday is no one’s definition of fun (I spent the whole drive worrying about bleu cheese, more on that later, too) my grumpiness with the traffic quickly turned around with the show that followed. Everyone in attendance was so nice and there was a palpable excitement in the house at the special evening in store for us.

The house band—literally, in this case, as the venue belongs to Intra-Venus singer Scott Stringham—opened the evening around 8 p.m. with a full hour of their self-described “psychedelic post-punk space glam.” The sound was surprisingly good for such a contained area, especially given the spaciousness of the band’s concept. They performed an excellent set—they were tight and if not as dynamic performers as the band name would suggest, definitely put on a good show. Bassist Barrett Ogden was the one to watch, sporting glittery space-pirate drag, but Stringham—in ‘80s ripstop “futuristic” gear and blue glitter – makes an excellent frontman, sounding strong despite having nearly lost his voice earlier in the week. The music is predominately noodly, bluesy Velvet Underground-esque rock n’ roll with touches of Rush, Tool and Cake and lots of sci-fi samples. The band has a new EP coming out soon and an album planned for next year.

After a brief break, and barely enough time for us to eat some of the house cold cuts, David J walked out and started his set.

The last time I saw him play was in 2003 when he performed Cabaret Obscura at the Dark Arts Festival. Dark Arts has always been better in theory than in reality for me (through no fault of the organizers) and that year was no exception—made worse because I was in charge of providing dinner for the star performer and at the time, finding his requested cheese was almost impossible in Salt Lake City (it’s much easier now). I spent the evening worrying about the quality of the Roquefort, rather than enjoying the show. Friday’s performance washed all of that away.

Dressed simply in a black T-shirt, trousers and a grey plaid vest and accompanied only with an amplified acoustic guitar, the man of the hour regaled us with his witty banter and songs both old and new, encouraging sing-alongs and even passing around a child’s toy xylophone for audience participation during his hilarious “Almost a Ménage a Trois,” about repeated failures to hook up with two women for a variety of Murphy’s Law reasons.

It’s probably the nature of the type of show, but the sound was far closer to Jazz Butcher than Bauhaus—funny, jazzy, slightly folky sounding songs with smart lyrics full of keen observations. This suited me fine since J’s work with Butch is some of my favorite of his work ever. One of the best moments of the night was “Where the Bloodline Ends,” which may be the funniest song ever written about vasectomies (and not just because it’s probably the only song on the subject), full of hilarious puns.

But the crowd favorite had to be Love and Rockets’ “No New Tale to Tell” on which we all joined at J’s encouragement. Everyone rocked out with him, even I (who should never, ever sing… my deepest, sincere apologies to anyone who had to hear me… eep!) and at the end, he pronounced it “sorted”—an oh-so British slang term for “well put together” or “cool” that has recurred through the history of David J’s bands—in the background of “Bubblemen Rap,” as the title of a best of Love and Rockets and even as the name of his record label—although to me it always sounds like “sordid.” It kind of fits, you know!

The night’s performance rounded out with another Love and Rockets song, a few tracks from the new album and a bit of chatting. I was especially amused when he dedicated “I’ll Be Your Chauffeur” to Jazz Butcher, saying, “if ever there was a man who needed a designated driver,” (a reference to Butch’s love for a good drink or 10). After the first couple of track, with the ice broken, everyone sang along to songs like “Waiting for the Flood” and “Everybody Wants to Go to Heaven.”

Once the show was over, J was happy to chat and take photos with us, as he sold some merchandise—T-shirts, CDs and vinyl records—and happily signed everything. When I slipped out, at last, to make my way back to Salt Lake, he was still going strong and talking with attendees about his plans to DJ at Area 51 the next night, reminiscing about past shows, drawing eyelashes on one attendee’s Bauhaus shirt and giving us all a few new tales to tell.