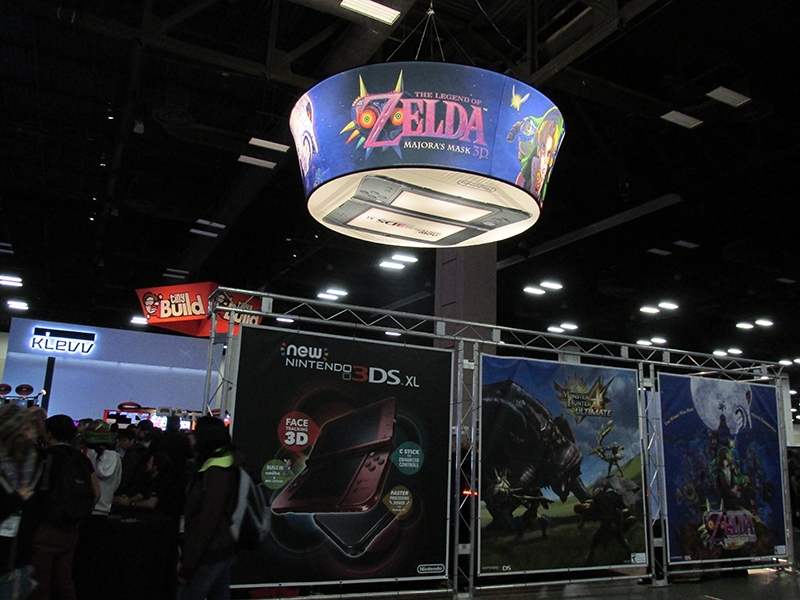 I’ve been going to PAX for almost four years now. A few Primes, a couple of Easts, and I always wondered what their first show was like. When they announced PAX South at last year’s PAX East, I was determined to get my ass to Texas—I wasn’t about to pass up the opportunity to attend an inaugural PAX. I wasn’t disappointed. It was, what my sister and I nicknamed, “Chibi PAX,” but it was still a great experience. You could easily have played every game in the entire hall in the allotted three days. Most of the games were indie developers and there was more of a tabletop presence than I’ve seen at South’s predecessors. All PAXs have a showcase—Prime has a general showcase, while East and Australia showcase indie games, and now South showcases indie tabletop games. The only big names were Nintendo and Microsoft. Microsoft only had a few indie games at their booth, while Nintendo used this opportunity to show off its New Nintendo 3DS.

When Nintendo first announced the New Nintendo 3DS, I laughed out loud. I get that it’s still a 3DS, but putting the word “new” in front of it just seemed lazy. Lame names aside, it’s a stunning handheld console that you should seriously consider adding to your gaming collection. The 3D on the current generation is more of a headache than it’s worth—moving the system slightly caused you to lose the 3D effect, so I leave the 3D off to avoid this annoyance. The New 3DS alleviates this problem with a face-tracking camera above the screen, and it works beautifully. You can tilt the 3DS this way and that with no break in the 3D—it’s beautiful. They’ve added a C-stick just above the X and Y buttons that takes the place of the circle pad pro attachment that was for the current DSs. It’s only a tiny nub, but it’s responsive, and the placement is actually all right once you get used to it. In most games, it will control the camera, which is incredibly nice for games like Monster Hunter and Majora’s Mask.

The Majora’s Mask 3DS update is even more beautiful than Ocarina of Time 3D, and I can’t wait to get my hands on the full version. The interface on the bottom screen is similar to Ocarina of Time, with the addition of the masks screen to make them more accessible. The graphics update is just as beautiful as the Ocarina of Time. The flowers that you jump out of as a Deku scrub look more like actual flowers, and everything looks smoother. I wandered the new Clocktown for a few minutes and noticed that things were a little different. The owl statues get a cool-looking update, and a few things have been moved around, like the bank that has moved into the central area instead of being off to the left. It’s the little things here and there that are going to make playing through the 3DS version a different experience from the N64 version. It’s shaping up to be a fantastic remake that you’ll need to pick up in February.

I’ve been contemplating joining the Monster Hunter franchise for a while now. I tried out the demo for the third installment and just couldn’t get into it—there was no direction or tutorial in the demo making it difficult to jump in if you hadn’t played the preceding games. Monster Hunter 4 Ultimate’s demo, however, actually tells you what’s going on and teaches you how to use your weapons. After going through the demo on the New Nintendo 3DS, I can’t wait to play the full game to see all the monsters the game has to offer. You chase down a monster, take him out, collect loot, and build better weapons. Lather, rinse, repeat, but the world is gorgeous, and it’s virtually immersive with the new face-tracking 3D. I tended to wander off the beaten path just to explore the world and what it had to offer. Since I played single-player, I had some companions with me called Palicos, adorable cat-like fighters. There’s going to be some cross-over outfits for the little Palicos from all over the video game world—Sonic, Mario, Luigi, Mortal Kombat, etc. It’s an extra bonus for people who are just joining the franchise. There is a demo for the game that will probably release to everyone on Feb. 13, along with the full version of the game.

Out of the tabletop indie games, I gravitated more toward the games that involved words or books. I’ve always been a bit of a nerd that way. Paperback was, by far, my favorite indie game out of PAX South. The perfect description comes from the creator, Tim Fowers, “Dominion combined with Scrabble.” It’s a deck-building word game where your hand consists of letters that you need to form words with. You start with five common consonants, five wild cards and a vowel that everyone can use in their words for an extra cent. Each cent you score can be used to purchase new letters, some of which have abilities to help you throughout the game, like drawing extra cards or scoring extra cents. It’s much easier to learn and set-up than Dominion, so it’s not intimidating in the slightest. The rules aren’t too specific, leaving it open for a lot of house rules—we decided you couldn’t use the same word twice, but that’s not mentioned anywhere in the rules. It’s available right here, and if you’re a fan of word games, you won’t regret picking this up.

Bring Your Own Book is another one of my favorite games from the Indie Showcase. It’s a unique idea that I really love. The way it works is: You have a small deck of cards, each with two ideas like “a line from an eviction notice” or “a line from a country-western song” and the judge for the round picks which line you scan for in random books. That’s where the hard part is—you have to scan the book as quick as you can so you can be the first one with a line, forcing the other players to find their line in 30 seconds or they’ll get stuck with a random line from the page they’re on. The judge for the round picks their favorite, and the player with the most points wins. It’s a different game every time you change books so it’s got a lot of replay value. It’s funded on Kickstarter, and it’s only a matter of time before you can get a copy.

Adventures of Pip is an adorable little platformer that was funded on Kickstarter last year—a lot of it probably came from their presence at PAX Prime last year. You play as Pip, a lowly, little red pixel that wants to save the princess from the evil Skeleton Queen. You wouldn’t think a small, red square can do much, but Pip gets some help from a ghost knight, Sir William, which will change Pip’s life forever. Sir William bestows the ability to evolve into 8- and 16-bit versions unto Pip, giving him an actual human form. It’s not just for show—when Pip devolves, he releases a wave of energy that can dissolve certain obstacles in your way. Each form has abilities that are unique—pixel Pip can fit into small spaces; 8-bit Pip can wall jump and run; 16-bit Pip can push heavy things and swing a sword. It’s got a lot of heart and it’s a fun platformer. It’s worth a look when it pops up later this spring.

All of the pillars of PAX were there—the Omegathon, all the freeplay areas, and all the gaming panels you can squeeze in between games. The Omegathon was tweaked a bit for South. They ran time trials of several different games, eliminating half of the Omeganauts at the end of each day. The secret final round was Pong on an old-school Atari. It came down to two friends who had known each other since college so it was a bit more dramatic than usual, and the crowd loved it. The Omegathon panels are the best panels to visit at any PAX, due to the energetic audience that frequents the show. Even if it’s a seemingly boring game like Operation, the audience cheers and roars at each misstep, and it’s incredibly fun to join in. The Penny Arcade founders, Mike Krahulik and Jerry Holkins, closed the show by playing a serious round of Pong after some begging from the audience. After some tense minutes, Holkins pulled away from Krahulik and won.

The first PAX South was a success. While it was a small affair this year, it was actually more enjoyable. I felt like I could actually play all the games the expo hall had to offer, and the lines weren’t long for anything. The longest I waited in a line for a game was 20 minutes or so. It may not have sold out completely before the show, but it’s still a PAX, and now that San Antonio has had a taste, it’s only going to be a few years until it sells out in a day. PAX Prime is still the cheapest option for Utah, but it’s nearly impossible to score tickets. PAX South will be pretty accessible for at least two years, so if you want a break from winter next year, I would plan a trip to remember the Alamo and discover the awesomeness that is PAX.