As the members of Pepper walk on stage, there is a roar coming from the crowd before the band can even touch their instruments. With little introduction, they go right into the newer song “Freeze.” Older songs like “Boot” and “Stone Love” make me feel more at home. 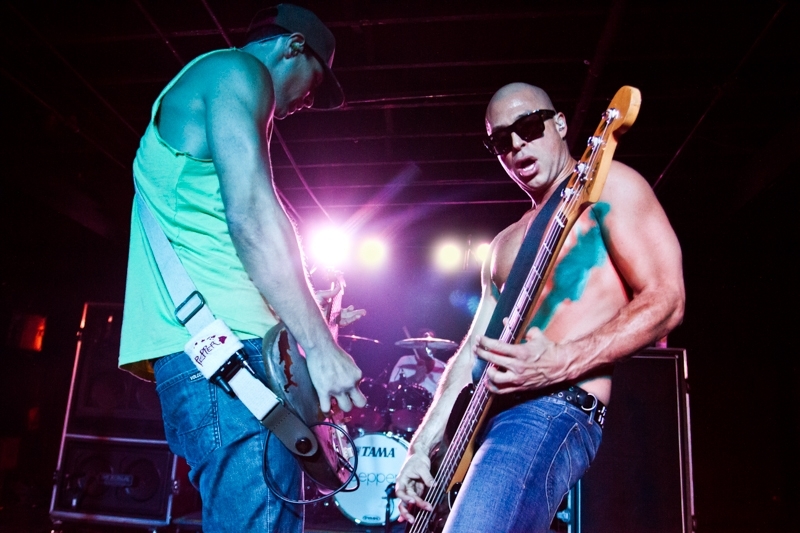 (L-R) Kaleo Wassman and Bret Bollinger are a force to be reckoned with to say the least. Photo: Talyn Sherer

If you have an older brother, you know that they can be real mother fuckers. Two weeks ago I came home to a suspiciously lumpy bed, only to find out that my shoes were under the mattress. From peeing in hairspray bottles to shooting each other with BB guns, brothers can be real bastards. Immature acts aside, my brothers shaped the kind of music I currently listen to. Pepper was one of the bands I grew up with, and the album Kona Town will always be one of my favorites. Once I saw they were coming to town, I jumped at the opportunity for a bit of nostalgia.

It has been years since I listened to Pepper—I had to wipe the dust off my Zune in order to do it. While the audio vibrations were gently seeping into my head, I realized that their music made me feel the same way it did ten years ago. I instantly understood why certain girls I know still jam out to the Backstreet Boys and other music that sucks. It’s all just preference. I was psyched that everyone at Lo-Fi Café would be there for the same reason. This is the best part of going to concerts, skate parks or nerd conventions: You have some connection with the asshole next to you.

A foggy Wednesday and a packed venue do not seem like they would go together, but Pepper seems to be making it happen as I catch sight of the line. While wandering around the venue, I see that Lionize is the opening act. I assume that with a name like that, one of them will have dreadlocks—or at least praise Jah.

Four white dudes take the stage, and I have no idea what to expect. As I am blasted in the face by green and purple light, I think of the Green Goblin, and after my ears recognize what they are hearing, I think of Clutch and Valient Thorr. After a couple of songs that sound just like southern rock, I hear some of the reggae influences. As the song slows down the pace of the crowd, I see puffs of smoke coming out of random spots in the crowd. This smell is familiar. It’s a smell my older brothers would tell me not to worry about as they walked in the house from the garage. Bassist Henry Upton seems as though he is in a trance with his head shaking—he looks worlds away. Singer/guitarist Nate Bergman looks as though he’s rallying us for some futuristic war with all his finger-pointing and talk of chem trails. Listening to their music makes me think of Mad Max, if it was set in Jamaica—with lasers. Lionize will release their fifth full-length album on February 18. Give them a listen on Soundcloud.

The headliner is about to start, I feel as happy as a gluten-based product at a celiac convention: I get to truly enjoy the festivities without being eaten. As the members of Pepper walk on stage, there is a roar coming from the crowd before the band can even touch their instruments. With little introduction, they go right into the newer song “Freeze.” Older songs like “Boot” and “Stone Love” make me feel more at home. Their new songs are awesome and have the same reggae feel as they used to, but I will always prefer songs I know the words to. The vibe is super relaxed. There are no mosh pits at this concert, just boogie circles. Towards the end of their set, singer/guitarist Kaleo Wassman and bassist/singer Bret Bollinger say, “You guys made a Wednesday feel like a Saturday,” and, “If Pepper was a stripper in Vegas making $1,000 a night, this would be a $10,000 night.” They couldn’t have said it better. Pepper turned what could have been just another weekday into the highlight of my week. The crowd loves their high energy so much that they won’t let them leave—we demand an encore. Pepper does not disappoint, whether you are a new fan or old.

Pepper is promoting their self-titled album on their own record company, LAW Records. This is their sixth studio album—buy it here. If you want to know more about their dynamics, check out the IAmA they did for Reddit a couple months back. They have kept their same sound while still progressing. I’m glad that I didn’t have to use some hipster speak and say that their older stuff was better. Their old stuff is definitely more familiar for me, but not better. If you want to look at some photos of the event taken by Talyn Sherer, check it out here.