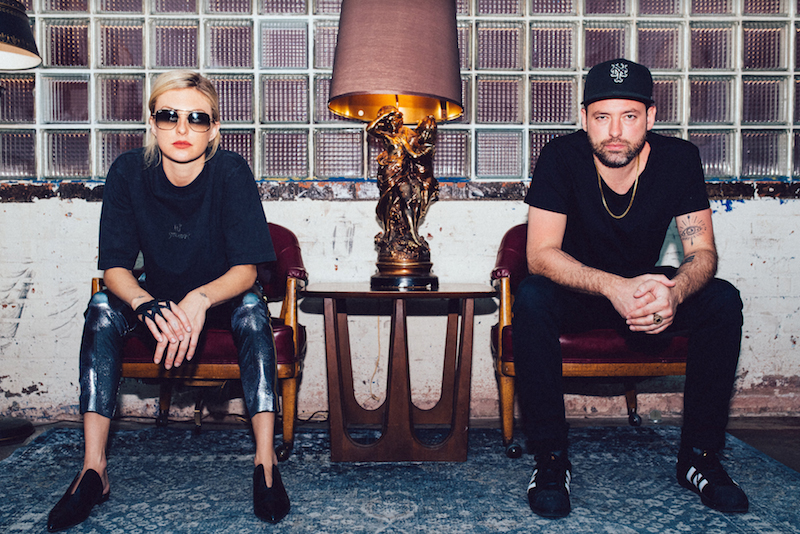 New York natives and sampling masters Phantogram graced the Ogden Amphitheater stage last Saturday. Sarah Barthel and Joshua Carter make up the dyad of dream pop, electronica and a sprinkle of nostalgic ’90s trip hop. Since 2007, Phantogram have been spinning their delights, initially under the moniker Charlie Everywhere (thank god for name changes).

A Saturday night at Ogden Twilight is a truly special treat, with only a small few of the season’s awesome offerings occurring on the weekend. Having rivaled the downtown Twilight series for a few years now, Ogden’s sister series has become a massive standout in the Utah live music array.

The first opener, locals Palace of Buddies, came in sounding like “Paranoid Android”-era Radiohead and gave a subtle spoiler to the escalating, highly electronic joys of the evening. Bless this local duet for wedding themselves amongst the extremely crowded stage rife with multiple drum kits and midi keyboards.

A hearty crowd was at hand due to the perfect, tail-end of summer Saturday-evening setting. As usual. Downtown Ogden made a pleasantly bustling dinner rush foundation for the night.

Mid-evening second rounder Bob Moses (deceptively the duo’s moniker only) served as a painfully cool stage mix of intense, rock-meets-dark-synths music à la ’90s Depeche Mode—Songs of Faith and Devotion, Violator, Ultra. Moses made an absolutely stellar accompaniment for Phantogram, and was yet another two-person combo. It’s unclear if this commonality was serendipity or just brilliant concert programming… likely the latter. The raw, traditional rock band format met with surprising and slick synths made Moses an outright showstopper across their entire short but fantastic set, wherein the second half they even pulled some Nirvana riffs from their stylish hat.

The night was Phantogram’s second show of their current tour, initiated with a flush of massive beach balls hovering above the crowd as the sun finally and fully dropped. Apparent by the T-shirt throwers and badging, the show was sponsored by a once second-fiddle American cola conglomerate. Once the overt product placements subsided, Phantogram came onstage in smoke and mirrors and mild dramatics. Backed by glowing anatomical and oceanic visuals, Barthel’s all-silver, hippie angel outfit entranced alongside her odd yet intense movements as she immersed in their signature sound.

Several classics and newer hits from their yet-unannounced forthcoming album rounded out the set list. They remained tight-lipped about said LP, and gave just a few clever apéritifs.

A year and a half since their last tour and a period of “knocking off the rust,” Barthel paused midway through the show to speak to the impact of suicide, having lost her sister to it three years prior. Barthel gave a brief and vulnerable treatise and dedicated the following song to said sibling. She stood stock still holding two hand mirrors towards the crowd into the stream of the spotlight at the crescendo, ostensibly in representation of visibility and breaking the bonds of darkness.

Phantogram finished the night with an encore including a couple slower jams, winding the crowd down and mellowing them before the post-gig diaspora began. Streams of only slightly noisy attendees poured out of the Ogden Amphitheater and into the balmy summer night. If you’ve not seen this lineup, let alone at the fabulous Ogden Twilight, put it on your concert bucket list.