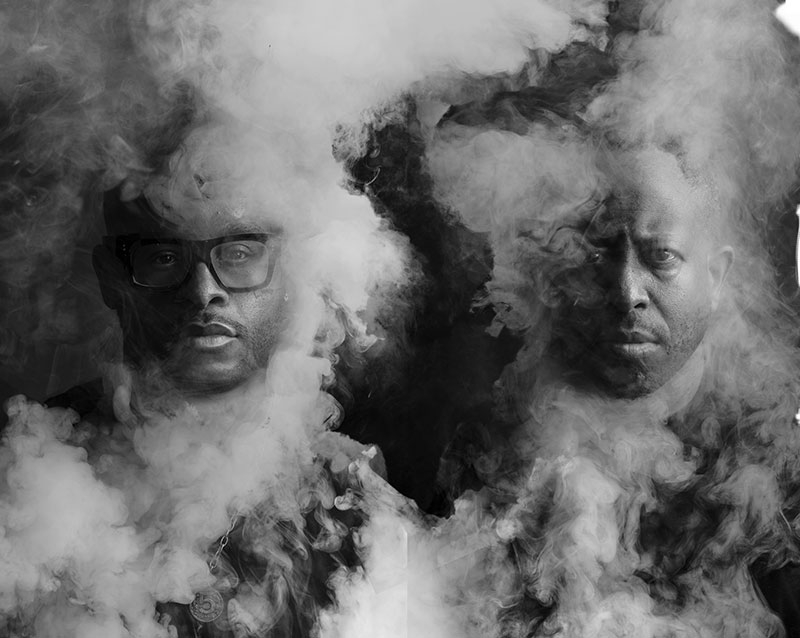 Royce da 5’9″ and DJ Premier make up hip-hop power duo PRhyme. Photo: Amanda Demme
There’s a new wave of hip hop rising to the scene with corporate hooks and lyrics that center around making money rain and fucking bitches, but DJ Premier and Royce da 5’9” aren’t having it. The two veterans recently collaborated with the concept of making a classic album that nods to the legends of the past, while simultaneously working to fulfill their unique artistic legacies. Both artists have enough of a reputation to hold their own, but their self-titled release shows a mastery that few could pull off. By preserving the old school style of hip hop, they toss aside the trends that the mainstream falls toward, and stay true to the culture of conscious lyrics and dope beats in a pure form that is the essence of PRhyme. “Fuck the clout,” Royce spat between songs during their set Wednesday night; and the realness was served.
I first arrived to hear Boldy James begin his set, who recently signed on to Nas’ newly formed label, Mass Appeal. While James’ cadence flowed smooth over consistent beats, his act fell flat on the growing crowd. As he pulled a classic emcee move of asking everyone to chime in on a simple phrase and getting zero feedback, his DJ had to step it up to take over the task in an almost futile attempt to hype up the crowd. While tough to see little enthusiasm from the audience, James didn’t let that phase him, and I look forward to watching his career progress with his lyrical mastery.
After James came Your Old Droog, who warmed up the crowd immediately by starting with a sample from Grandmaster Flash’s “The Message.” Droog rose to the scene last April with the anonymous release of his self-titled album, and while fans convinced themselves that it was Nas, Droog stayed low while rumors escalated before finally revealing his identity. That hype can’t be bought, nor can it be faked: and Droog brought serious game to his live act. Droog was accompanied by DJ Skizz, who busted some mighty scratching over booty-shaking beats. Droog’s verses were packed with self-assured wordplay, but his subjects showed a side of sensitivity to an otherwise hard-seeming surface, like when he rapped about girls unfollowing him on Instagram, or when he took a break from rapping to sing a ballad for the ladies (all three of us). It’s that type of vulnerability that I hope he holds onto, as it showed a different type of confidence that holds steady over ego-driven MCs.
It’s been over 12 years since legendary DJ Premier has visited our salty city, and he kept the energy high throughout the night. With the duo starting out with “PRhyme,” the first track on their album, Royce glossed over samples of Adrian Younge’s “Midnight Blue” with tight rhythm and flow to set the bar for the consistency he can spit, seemingly effortless. It’s obvious that the two hold each other in high regard, but they played together like siblings, feeding off of the other on the fly to bring a one-of-a-kind experience to the show. Preem took a break from their flow to congratulate Royce’s almost 3-year anniversary of sobriety (“but he’s still a crazy motherfucker,” he had to add), as they broke into “Courtesy,” a track about the journey through overcoming his alcoholism, with lyrics like “I used to rap about death, now I’m only concerned to live.”
While Royce took a break to recharge, Premier started his own trivia game, sampling old beats from the likes of Nas, Notorious B.I.G. and Eminem, flexing the muscles of his repertoire throughout the span of the three decades he’s been grinding in studios. As he turned the mic on the audience, he seemed legitimately pleased that people knew the lyrics to the classics he fueled.
With a return of Royce and a performance of “Microphone Preem,” the second part to Slaughterhouse’s (of whom Royce is a part of) “Microphone” from their original release, the two took turns to educate the audience on what they’re all about. “There’s all types of hip hop,” Preem started, “but the type of hip hop we do, it sounds like the way it started back in 1973. That’s the original year hip hop started. It’s still brand new. But we know what the fuck we’re talking about, and y’all know what the fuck you’re talking about ‘cause you’re here with us.” After his spiel, Royce took to the mic to tell us all to educate ourselves on Adrian Younge, a notable producer who draws from the ’60s and ’70s to create his songs, who gave Premier a catalogue of his music to use during the creation of PRhyme. “It’s that golden age of music theory, that’s what PRhyme is about,” Royce asserted, and the hands up in the air were a testament to their lyrical and rhythmic mastery that draws us to what hip hop is truly about.
Photos: