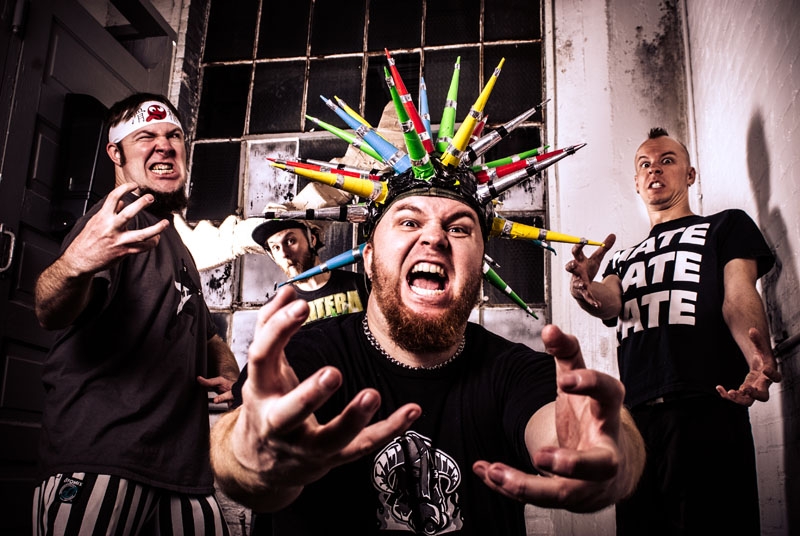 Typically, when it comes to me filing a show review, this space is almost exclusively reserved for subtle indie bands playing in Provo. The pieces are often filled with effusive praise for the insightful songwriting, discussion about whatever string instrument (be it the harp or the viola) that particular band has chosen to infuse, or long winded diatribes about why the independent Provo music scene is the single most important thing in the world. This occasion, however, was not typical.

Psychostick is a heavy metal band out of Chicago, via Tempe, AZ. That doesn’t sound too strange, right? Well what sets them apart is they are a comedy heavy metal band, or, as they brand themselves, humourcore. Think System of a Down meets Insane Clown Posse meets Weird Al. Your first thoughts reading that probably closely mirror mine, “What the fuck?” But, now preparing to release their fourth album, and midway through a successful tour, Psychostick is apparently a known commodity – so heading to the show, Monday night, there was a measure of intrigue within me.

When I arrived at Urban Lounge, at about 8:30, the venue was pretty dead, with only about 30 or so concert-goers, all dressed in black T-shirts (I missed the memo, wearing a bright red button up). To be fair, I imagine a lot of people were still trying to recover from the United States soccer team’s last minute victory, and all of the stress that came with it. I wandered to the bar and ordered a Coke (which I suspect was Pepsi) and then found a seat near the main area in front of the stage.

Things started out with a bit of a hitch when, apparently, opening act The Bunny The Bear’s bass player, Rob Weston, was not allowed into the venue because he was not quite 21. Because of this the show didn’t start until a little after 9, when Psychostick took the stage.

They started the show off with “Welcome to the Show,” a song in which they scream things like, “You’re at a concert!” and “I like to yell in the mic and say bad words!” Also of note, the lead singer, Rob “Rawrb” Kersey, wore something of a pointy jester looking hat, and bass player Matty J “Moose” adorned an antlered cap, that reflected his namesake. Silliness abounded. Between songs is when Psychostick may be their most charming selves, yelling at the crowd, telling of their love of boobs, and swapping stories about their shitty vehicle. Maybe charming wasn’t the exact term I was looking for there, but in an odd way it came off as such.

The show continued on with a barrage of very loud satire, including songs like “I Can Only Count to Four,” a parody of Drowning Pool’s “Let the Bodies Hit the Floor,” “Boobs,” a song about, well, one of their apparent favorite subjects, in which they invited one of the few females to stand in front of the stage while they sang to her boobs (honestly, as weird as that sentence was to read, it was doubly hard to type), and the incredibly popular “Beer,” which, fun fact, was the most downloaded song on Rock Band in 2012.

“Look, we like to have fun,” said Matty J, moments after the show “So many bands, especially metal bands, just are so [giving his best ‘grr’ face] serious, we just want the people who come to our shows to laugh and have a good time.” This was evident from early on, and the small crowd didn’t phase them one bit. I even caught myself cracking a smile or two at how absurd it all was.

Dog Fashion Disco, a band that has been around since the mid ‘90s, took the stage next. They were equally as loud, but not quite as goofy. One of the features of their show was hellish paintings of characters like Ronald McDonald that sat behind them during the performance. All dressed in white shirts and ties, their on stage presence was a bit more traditional but their music is anything but. For example, they heavily feature a keyboard, an instrument you don’t often associate with the genre. Overall they had a good performance, and a strange juxtaposition to the act before them.

As the night wound up, I found myself at once impressed, pleasantly surprised, and a bit sad. Impressed because everyone who performed on Monday night, were incredibly good musicians; surprised because I really enjoyed the show; and sad because I wish more people were there to enjoy it. Look, I’m not going to run out and buy every piece of Psychostick music that has been released, because it’s just not my thing, but they and Dog Fashion Disco, put on a pretty damn fine performance and next time they are in town, I definitely would have to think about going and seeing them again.