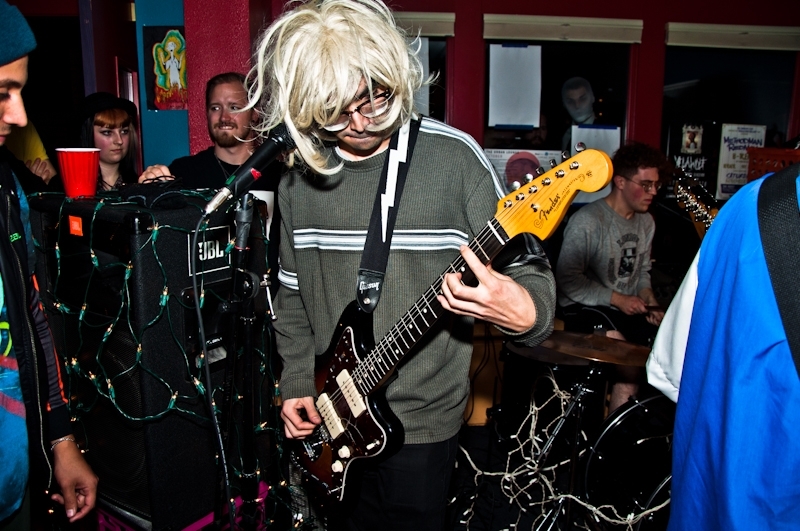 The month of October is a 31-day-long endurance test of sin and debauchery. Every party or night of heavy partaking prior to All Hallows’ Eve is a stepping stone to build the tolerance of the faithful for the ultimate celebration of horror-filled thrills and chills. By this, I mean the traditional celebration of paying respect to the great punk bands of years before by playing the devil’s music for Punk Rock Halloween. This year’s bands chose to emulate The Clash (Problem Daughter), Nirvana (Chalk), Devo (Foster Body) and Beat Happening as performed by various members of Prince Polo. Making my way to the center of the city, my depraved senses gravitated toward the heart of downtown, to where the music surely will be—Diabolical Records.

Adhering to the prescribed warning of zero alcohol tolerance for this all-ages gig, my wandering took me through a slight detour. I was overwhelmed by a thirst that could only be satisfied through the doors under the illuminated lights of Bar-X. After satisfying my thirst, I was lured to the vinyl-filled den of iniquity by the assembling masses of rock ‘n’ roll zombies. Finding a spot to witness tonight’s mayhem, the opening act covered the much anticipated Beat Happening. They blasted into a calm, melodic, but up-tempo groove, providing a sort of elucidating experience. Technically speaking, they performed numbers like “Bad Seeds” with great skill. However, between the vocals and awkward start-ups after continuous breaks, the act left a bit to be desired. It was, however, enough to get the audience to start moving about.
Rushing back into the venue after a quick break, I arrived to find myself in near-riot conditions. Problem Daughters’ take on The Clash inspired the shop to become a seething mass of bodies jumping up and down with giddiness. No doubt this electrifying energy was spearheaded by the enthusiasm that radiated from the band’s solid performance. They knocked out hits like “Hateful” and “London Calling,” The latter number, of course, instigated ghouls and ghoulettes alike to sing along with the band. Simply superb, the energy left by Problem Daughter left a noticeable hum in the air. Clearly one cannot go wrong blasting out The Clash.
Gliding out during the setup of the next act, I wander into the street, only to be brought back into the awareness of my surroundings by Diabolical Records owner Adam Tye yelling out “Devils, witches, car is coming!” Moving out of the way of the metal deathtrap on wheels, I look for a place to occupy so I may gather my composure. Finding a corner to lurk in, I prepare my spirits for what no doubt will be an impressive delivery of Devo hits provided by Foster Body. I am not disappointed.
Starting out with a slow buildup, which quickly gains the attention of the assembled horde of rock ‘n’ roll zombies, Foster Body launches into “Jocko Homo.” They quickly follow up with numbers like “(I Can’t Get No) Satisfaction” and “Praying Hands.” Their passion comes through each song and is easily matched by the near-craze fever of hopping about exhibited by the audience. Nothing better singles out this wild display of excitement than when Foster Body carries on into “Whip It.” This causes the room to almost shake with the riotous movement of the bewitched masses, which belt out the chorus, “Now whip it, into shape, shape it up, get straight.” It’s an overwhelming but euphoric experience.
Upon hearing the sound check, a less-packed room tripled its occupants in a matter of seconds. Closing off this night’s festivities, Chalk played as Nirvana, with Luigi Ghersi wearing a blonde wig portraying a back-from-the-dead Kurt Cobain. Chalk knocked out number after number like “About a Girl” and “Negative Creep,” much to the excitement of the crowd. Each song caused ripples of wild moshing through the gathered and apparently tireless crowd. Though, despite the explosion of energy provided in each tune, the band seemed to need to take constant breaks to regain composure, deal with technical difficulties or banter with the audience in front of them. The latter of which sometimes came across as chit-chat filled with apathy rather than playful and provoking. However, when Chalk launches into “Smells Like Teen Spirit,” all hell broke loose between moshing, crowd surfing and almost unanimous singing along.
Chalk’s conclusion was well received. Taking careful steps past the conglomerate of rock n’ roll zombies spilling out into the streets, I made my way down to the Copper Common for some trick or treating before last call. This year’s Punk Rock Halloween is over and I doubt whether the ringing in my ears will subside, or that I even want it to.
For more photos from Punk Rock Halloween, be sure to check out our photo gallery!
Photos: