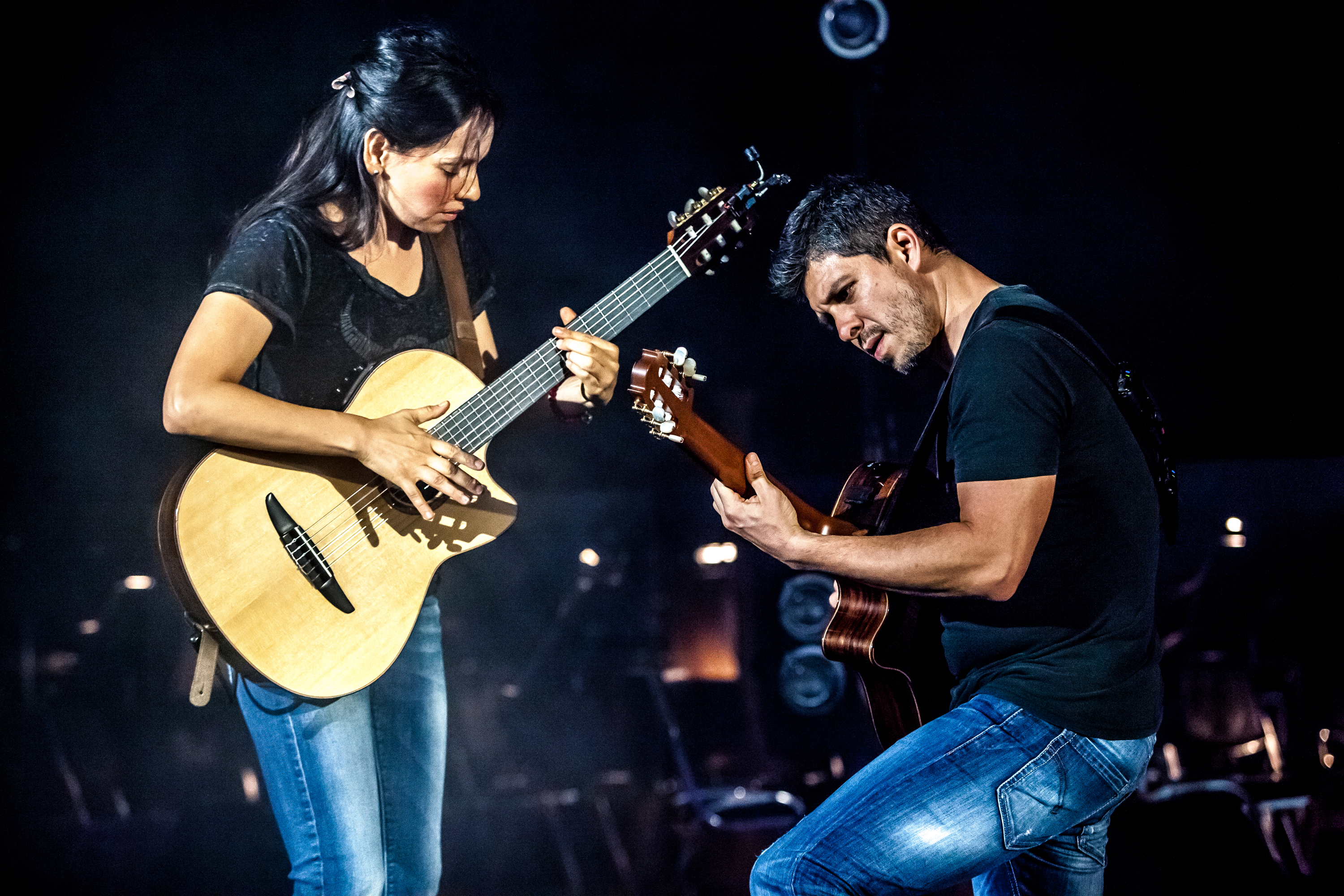 A procession of pink-bottomed clouds marches across the valley and rises up and over the foothills of the Wasatch.  A gentle breeze blows the smell of sage through the air as the lights of the city begin to flicker and we gaze across the venue towards the stage. The Red Butte Garden Concert Series is winding down from an exciting summer of top-tier acts that fill the expansive lawn with eager listeners.  From our seats in the concert club section near the middle of the natural amphitheater, gentle acoustic guitar melodies float past our ears as Robert Ellis opens up the evening.  A jovial Texan with a quick wit, Ellis plays bluegrass-y tunes about his days growing up in a small southern town. His short set creates a relaxed atmosphere that is the perfect precursor of what’s to come.  As the stars begin to twinkle and the half-moon pops out from behind the clouds, a man and woman take their positions at center stage.  Fog machines kick out a mystical vapor that is backlit by fiery-red lights as Rodrigo y Gabriela open their set with classical Flamenco guitar rhythms.  Within a few minutes, the pace of their picking quickens and they break off into rock-inspired chords reminiscent of earlier albums like 11:11.

This dynamic duo, made up of Rodrigo Sánchez and Gabriela Quintero, is a force of nature that combines traditional Spanish guitar with pulse-pounding instrumentals inspired by an affection towards heavy metal. Their roots intertwine from growing up in Mexico City, playing for metal groups like Tierra Acida (Acid Land), to traveling across the Atlantic to Ireland in an effort to uncover new genres under the tutelage of master guitar players.

The sound emanating from the stage draws the crowd closer and they kick out a few new tunes they’ve been working on perfecting.  “We are happy to be here again … being musicians on the road, we are always trying to come up with new ideas and music, but sometimes it’s tricky. We are testing the waters with this material, because we need to put out a new album,” says Gabriela in a thick accent as she addresses the crowd after the opening acts.  It has been four years since their last release, 9 Dead Alive.

In addition to their blend of original music, Rodrigo y Gabriela are known for some blistering covers of perennial favorites like Metallica’s One and Led Zeppelin‘s Stairway to Heaven. For tonight’s performance, they deliver a transcendental version of Pink Floyd’s Echoes. Creative nuances incorporating nuevo-flamenco with Pink Floyd’s prolific chords produce a unique sound that stuns the senses. Taking it deep into the stratosphere, Rod picks-out some psychedelic rhythms that resonate across the ramparts of the surrounding mountains. A dramatic tempo change follows and classics like Diablo Rojo uplift the crowd from their trance. Quintero dives into an incredible solo with all the trimmings of her traditional upbringing as the palm of her hand belts out percussive beats against the body of the guitar in between string-melting, bridge-filleting melodies that are best described as “muy caliente.”

A standing ovation from the crowd draws out an encore peppered with new songs and experimental notes that illustrate their dedication to constantly re-inventing their sound. Axes crossed, face-to-face, Rod and Gab strum out their final tune and thank the crowd one last time.  “For some reason we were given the opportunity to play guitar for many hours since we were kids.  It is important for us to share that gift, which was probably earned more than given, and hopefully this music serves a purpose to inspire you in whatever you do,” says Sánchez.

Certainly a memorable evening from an act that never ceases to amaze.  You can experience the music at any one of their nation-wide tour stops this fall and find more info at Rodgab.com.