Russian Circles’ tones, tempos and rhythms rise and fall, fold and buckle, tear and crumble, melt and congeal, in the way that mineral processes sculpt the land. The spectacle is orderly, rational, frequently beautiful, and spatially and temporally grand. 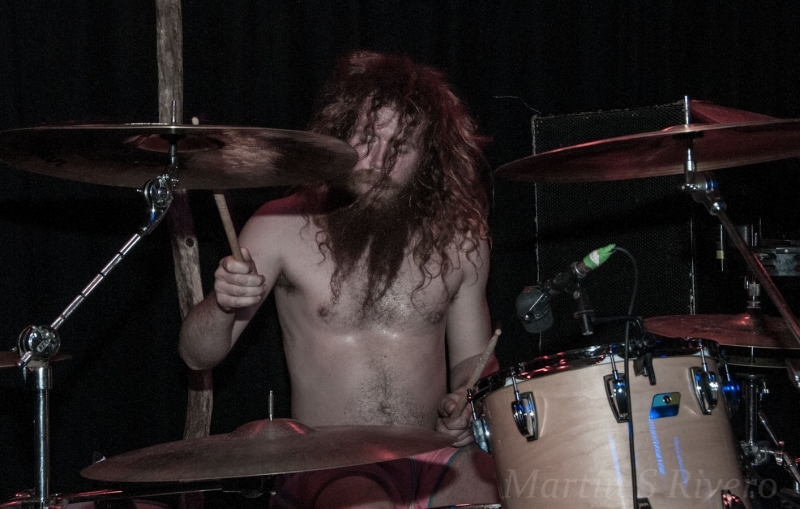 Anticipation was high for Sunday’s triple-header show at the Urban Lounge. And the turnout was remarkably impressive for a Sunday night. I was surprised not only to see such a big crowd, but also to see such a crowd so early in the evening. It is not often that you find that many bodies occupying a club so hard before 9 p.m., but a major event it was.

By the time I arrived, Richmond Virginia’s Inter Arma was already onstage and owning the audience’s collective ear. What immediately captured my notice was the unexpected clarity of the sound. While I expect murky, fungal tones from sludge metal acts, Urban Lounge’s new sound system offered a crisp group portrait of the band and a discrete profile of individual instruments. I could easily distinguish the analogue breakup of each amplifier, as well as the actual grain and words of the vocals. So eerie-clean, in fact, was the sound, that I wondered for a moment if some of it wasn’t pre-programmed whiz-bang. But the band’s sweat-soaked and hair-plastering performance soon convinced me that this was all really happening.

The current trend in metal, as I perceive it, seems to be the pursuit of fearful and crippling symmetry, an over-all atmosphere purchased at the price of any groove. Call it Anti-Rock, or whatever the heck, but if this is so, Inter Arma is clearly a dog at the head of the pack. The band served up a full bowl of sonic Jello, one which placed an emphasis on surface tension over artistic depth. The rumbling was so finely tweaked that identifiable standing wave patterns seemed to appear on the belly of the beast, yielding an almost bowed and symphonic feel. What kept the tightly controlled performance not just impressive but actually intriguing was not even the commanding presence of vocalist Mike Paparo, so much as the berserk antics of drummer T.J. Childers. It is not often that a drummer steals a show, in any genre, much less metal, but such was the case that night. In fact, Childers, too gonzo to sweat it all out during his own set, continued to cavort atop the west bar for the rest of the evening.

Pursuing a similar goal, though along a very different path, was Canada’s KEN mode, a thrashy three-piece bent on mayhem. Here the expansive atmospherics of Intra Arma were forsaken for a prolonged series of musical neck punches. Though precisely timed, KEN mode’s rhythms remained defiantly herky-jerky, preventing anyone present from accidentally getting their groove on. I couldn’t help but notice that for all the fury and swagger (bassist Andrew LaCour at times made me LOL, as his stage moves recalled Mary-Ellen Gallagher “Superstar”), the crowd, though awake, remained entirely motionless. However many fucks might have been given that set, not a single head was banged. Not off stage, anyway. The anti-rock ethic was still in full anti-swing. While I found this act not so persuasive as Inter Arma, I will confess that no less an authority than the disarmingly rad Rebecca Vernon, of local doom quintet SubRosa, informed me that KEN mode was the high point of the evening. So, there I have it.

Anyhow, after a lengthy setup and sound check, Russian Circles took the stage. I will expose my own lameness and admit that what affected me most the entire evening was the house music played just prior to the headliners. I say this not to discredit any band, but simply because the music (clearly Russian Circle’s own selection) gave me the cue I needed to get the most out of the show. As I left the smokers to smoke and reentered the crowded bar, I found myself surprised and delighted to hear swirling sounds I knew from my own youth, the timeless tape-loops and densely layered fuzz guitar of Fripp & Eno’s legendary album, No Pussyfooting.

As the band finally launched into their set, it occurred to me that Russian Circles had identified the essence of that landmark experimental album and sought to recreate, shape, and update it, live onstage. Eschewing songs developed out of any lyrical or narrative substance, Mike Sullivan and Brian Cook instead echoed and looped their guitars in and out of different phase states—as if from solid, to liquid, to gas, to plasma, and back again. The experience was fascinating, as nature documentaries are fascinating, provided their subject is not the drama of biology, but rather the impersonal processes of geology or astrophysics. For all the varying textures and viscosities of the Russian Circles sound, there is, to my ear, a decided, and seemingly deliberate lack of organic feel, a significant absence of anything that used to be called “soul.”

Russian Circles’ tones, tempos and rhythms rise and fall, fold and buckle, tear and crumble, melt and congeal, in the way that mineral processes sculpt the land. The spectacle is orderly, rational, frequently beautiful, and spatially and temporally grand. Though an essential part of this grandeur and beauty is the blank impersonality and flat inexpressiveness of it all. To quote your hero Edward Abbey, “I dream of a hard and brutal mysticism in which the naked self merges with a non-human world.” Working in these terms, Earth Works artists of the ‘60s entered the American West and used physical scale, natural forces (gravity and dissolution), and material processes (erosion, filtering and sedimentation), in a conscious effort to escape the narcissistic spirituality and bloated emotionalism of abstract painting and sculpture in New York. They sought to move the viewer not psychologically, but bodily, in desert space and according to atomic clocks. If it was the aim of Russian Circles to achieve a similar result through the use of drums and amplified guitars, then their mission was accomplished. For the formerly frozen audience, under the band’s direct impact, broke open and began to flow.

If my response seems all too intellectual, I can state my case otherwise. Russian Circles threw down hard and shook the room in a way that was both heavy and unpretentious. This was a cleaner kind of desert rock, without the bong load or the F-dude attitude. And the public response, both during and after the show, was hugely positive. Whether any of the bands were my favorite or not, is beside the point. This was post-stoner metal in its most current form. It was instructive and impressive to witness the event. I’ll listen to music more clearly as a result of being there, and I expect I’ll hear Salt Lake fans talking about Russian Circles for some time to come.