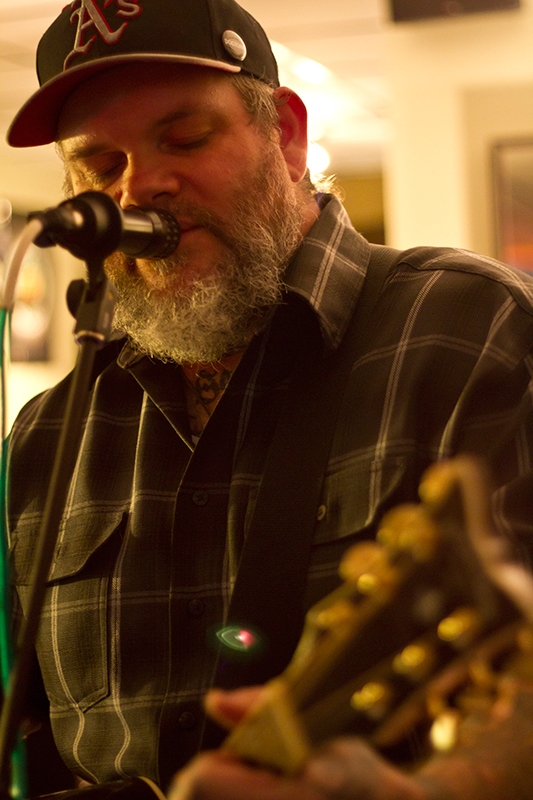 Scott Kelly and the Road Home @ Heart of Gold Tattoo 01.30 with SubRosa, Gentry...

Heart of Gold Tattoo stretched its welcoming arms around me the moment I walked through the door. The tattoo-shop-turned-acoustic-music-venue smelled sterile, as tattoo shops do, and the walls were covered in black-framed hand drawn pieces, primarily beautiful traditional-style tattoo designs. They weren’t your usual bold-lined pinup girls, but vibrantly colored and heavily shaded pieces of art.

The cabinets and tables of the tattoo shop were pushed up against the walls to allow for more floor space. The warm, yellow lighting was cast from a few table lamps lining the walls and two wine bottle lamps atop an ornate, illuminated dresser positioned behind the performers. A soft red glow emanated from the neon light in the front window, adding to the warmth throughout the shop. Maybe it was the amount of people packed shoulder-to-shoulder or maybe it was the heat created by the lamps, but the venue was too hot for jackets despite a cold Salt Lake evening just outside the door.

The large crowd was as inviting as the warm lighting and even warmer temperature. As the show progressed, many hugs were exchanged throughout the audience. Friends and fans sat cross-legged on the floor in front of the bands and the missing stage contributed to the overall casualness of the show.

Gentry Densley, the man behind the guitar and vocals for Salt Lake City’s own Eagle Twin kicked off the night of subdued music at Heart of Gold Tattoo. He performed sans drummer to a full house with an almost entirely metal guitar in hand. His nervousness was apparent in his rushed timing and he couldn’t seem stay in a groove for very long. Additionally, he played the entire set with his eyes closed and minimal banter between songs. That aside, Densley’s performance captivated the audience. The sound emitted from his tiny amp and the two monitors in the corners of the shop behind him was enough to carry the growl from his guitar through the entire venue. His vocal performance was on point and the gruffness in his voice suitably matched that of his guitar. He wrinkled his nose every time his voice got especially harsh. When he wasn’t singing, he would step away from the mic and lose himself shredding his guitar. I could feel every down strum he played rumble across the tile floor and travel right through my chest. His bends and vibratos on his guitar and in his voice were executed wonderfully. At one point during the set, Densley faced away from the audience and moved closer to his amp, manipulating the feedback. He had a simple effects pedal setup, but he didn’t require much. He parted from the spotlight to an enthusiastic applause from the audience.

The time it took to remove gear and set up for the next band wasn’t accelerated by minimal amount of amps, but the audience didn’t appear to be inconvenienced. About half the crowd migrated to the patio outside the shop for cigarettes and conversation but quickly returned as SubRosa’s set began.

SubRosa performed their first acoustic set with bassist Levi Hanna and drummer Andy Patterson. Prior to this show, all of their scaled-down sets were performed by Sarah Pendleton and Kim Pack on violin and vocals, with Rebecca Vernon on guitar and vocals. SubRosa balanced their sound between two electric violins, an electric guitar and bass and Patterson’s percussion. His drum kit was absent and replaced by a wooden box, two mallets and a small array of effects. SubRosa instantly fell into an unshakable groove and it was apparent the band was more than comfortable with their music. As Vernon played, she confidently gazed into the eyes of the mesmerized audience members. Hanna performed sitting on top of his practice amp, and the rattle of his bass strings against the fret board were audible over his reverberating bass. The set seemed too short, only because SubRosa is so excellent live I didn’t want it to end. I heard a disappointed groan from somewhere in the crowd as Vernon announced their final song, an a capella number rich with harmonies from Vernon, Pack and Pendleton. It was obvious the vocalists had excellent internal metronomes and had practiced the number more than a few times. Stripped-down SubRosa can contend with the band’s full setup and if you haven’t seen them play an acoustic set, you really need to.

Scott Kelly and the Road Home jumped right into the first song without a word, immediately silencing the mingling crowd. Their setlist consisted of mainly melancholy songs off of their album The Forgiven Ghost In Me. Like the two preceding bands, Kelly of Neurosis kept the between-song banter to a minimum, distinguishing this show from a conversation-driven coffee shop performance. As the show progressed, the amount somber faces in the audience surrounding me became abundant. The musicians had everyone in a trance, only broken by a telephone call perfectly timed with the fade of an ending song. The answering machine of the tattoo shop recited store hours and restored smiles to all the gloomy faces.

Noah Landis, also of Neurosis, was the second guitarist and switched between an orange sunburst acoustic guitar and a sparkly silver electric guitar. He capitalized on the amount of room around him by moving around while playing. He leaned back as if he were anticipating a musical ass-kicking with every strum. He stared into the crowd’s faces through his black-rimmed glasses with a smile on his face but a furrow in his brow. When he wasn’t playing either guitar, he performed on a tiny electric keyboard placed on a low end table in front of a group of people sitting on the floor. Greg Dale’s haunting backup vocals accompanied Kelly’s with deep, bass-heavy voices uniting in painful hymns.

The crowd thinned out by the middle of Scott Kelly and the Road Home’s set, but the remaining people were as friendly and generous as before, if not with heavier eyelids. Everyone felt the generosity of one particular crowd member during the final few songs of the band’s set as he passed out the contents of a 30 pack of PBR. The show came to a close around midnight and the crowd filtered out on its own accord. I left the venue wanting more tattoos and feeling a warm sense of community despite only recognizing a few faces. I would definitely attend another show at Heart of Gold Tattoo. Although it’s small, the acoustics are optimal and the atmosphere was beyond inviting.