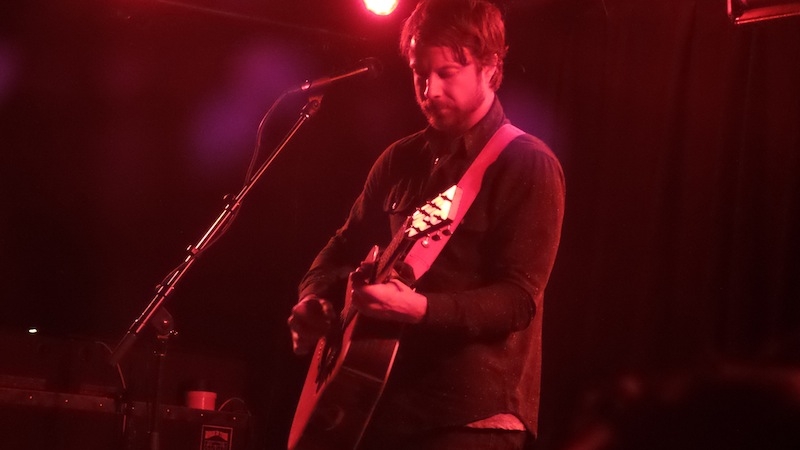 Sea Wolf’s Alex Brown Church came to Urban Lounge for an intimate solo show. Photo: Benjamin J Tilton
Generally when one attends a concert at the Urban Lounge, you prepare yourself for dancing and bar-like mischief. You flash your ticket at the door and wander into some form of pre-arranged chaos. The chaos will be bright and the chaos will be flashy, but on rarest of occasions, there’s no chaos to be found. Wednesday, April 30 was one of those days. The Urban Lounge was filled with chairs for a “seated” show and the concert goers in attendance didn’t know what to do with themselves. There was much discussion in regards to seat preference but, a couple beers down the road, everyone was one happy family. The acoustic alternative crowd is a shy intellectual short—everyone was so polite, I had to remind myself I was at a concert. I actually bumped one patron, causing them to spill their beer and they were the ones to apologize. The common interest amongst the crowd that night was the one man version of Sea Wolf. In this, the courteous attendants were more than accurate for the mellow climate. However, I will add, in contradiction, that there were three fist pumping Bro-chachoes behind me all evening and there’s nothing like hearing, “Fuck Yeah!” shouted after a song about failed ambition and loss.The first act of the night was a young local singer by the name of Sayde Price. She croons a bit like a dispassionate Mazzy Star, stretching her melodies into lullabies that slowly rocked the audience to sleep. Price described her songs as “Patient” and I defended her sleepy enchantments to my surrounding piers because I have a soft spot in my heart for early ‘90s female singers addicted to heroine. The gentleman to my right, Erik Escobedo, was actually pointing out the members of the sleeping audience and the woman to my left, Tiffany Homes, enjoyed the music but couldn’t figure out why Price spoke in baby voice in-between songs.Price does comes across as a real artist. So much so that she forgets she has an audience. After her set she invited her fans to come to her merchandise table and say hi. When I went over to shake her hand and tell her how much I enjoyed her music she looked at me like touching my hand was far too massive a chore to be bothered with. The gentleman to her left gave me such a dirty look that people around me asked what was wrong with him or if I had dated her in the past. I walked backed to my seat and received a dozen “I told you so’s” from my seatmates for defending her. Not only does Price not pay attention to her audience, she also ignores her fans. It reminded me that so much is taken for granted in youth. I wish Price the best in the future and good luck with growing up.Alex Brown Church comes on stage and the mood instantly picks up. Sea Wolf is always composed of Church, and he usually acquires a band before his tours but, for this special show, he is going it alone. Before Church starts playing, he just hangs out and talks with everyone. He also inadvertently wins over the hearts of every woman in attendance, as giggling thirty-somethings surround me for the duration of the show.

Church was funny and honest. He told little stories about songs before playing them. He had a cheeky opinion on Milwaukee’s gloomy discourse that got some people’s attention. He played sweet songs like “Priscilla” that had even me swaying like a thirteen-year-old girl. Church was just excellent for the entirety of his performance and once again I was blessed with the quality of musicianship Salt Lake City attracts.

By the end of the show, good vibes were shared by all. Church had also invited people to hangout at the merchandise table and I cautiously walked over to once again attempt a handshake. This time around the handshake was accepted—Church was just as pleasant to talk to as he was to listen to. He stayed, meeting his fans till the last one walked out the door. He told us previously that he would not be back soon because after the tour, he will start a new “single-less,” non-label, burdened experiment. Church seemed so excited about this you couldn’t help but smile at his enthusiasm. If you remember, Sea Wolf came about from Church’s experiments while he was in the band Irving; so who knows what’s in store for us with this project. From all of us here in Salt Lake City, we thank you Sea Wolf for stopping by and were glad our weather’s better than Milwaukee