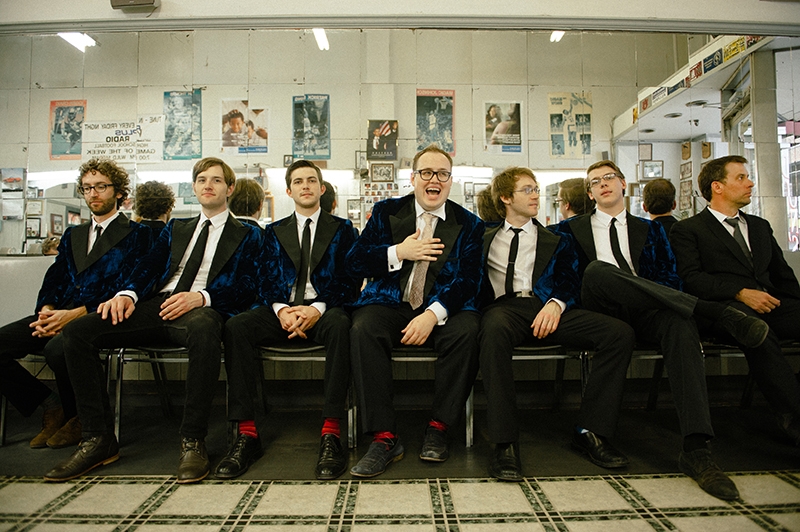 St. Paul & The Broken Bones hearken back to the late greats of gospel and soul with their upbeat tunes. Photo: David McClister

Tonight’s adventure into the night is inspired by a promised soul salvation that runs on sleep deprivation and a long, caffeine-induced day. Luckily for me, the gospel of St. Paul & The Broken Bones is ahead and my spirit rises to the occasion through the consumption of Este’s gorgeously greasy pizza. All that is missing is a pint of something with a bite and I’ll be set. This is soon rectified upon waltzing through a packed house and straight to the bar. Taking a deep sip from my plastic grail and looking around, I am aware that I am not quite in Kansas anymore. The audience represents a crowd that I am not usually too acquainted with. They all seem to be young(ish) professional types that carry no definitive edge in their appearance. Meaning there is a lack of leather and denim that is replaced with a visual abundance of folks in nice blazers and formal attire.
The opening act Sean Rowe is a great musician and has notable talent—unfortunately, not enough to captivate a room that is filled to the brim. His longing folk-bluesy tunes are nearly always drowned out by the chatter of the audience. “It’s pretty mellow,” says concert goer Mahaila in regards to Rowe’s performance. It is because of this that it is easy to ignore Rowe—but I’ll hand it to the audience, as they do take some obvious cues and clap/cheer after the conclusions of his songs. Despite this partial show of appreciation for Rowe, the act would be better suited for a more intimate setting like a café or pub.
After Rowe departs—again to cheers—the house music reflects that of the headliner by playing some classic soul. Though, like before, the house music is barely audible over the chatter filling the room.
The wait for St. Paul & the Broken Bones is lengthy, even though most of the gear is already onstage. When they finally come out, it is to excited cheers from a very patient audience. Opening up with an instrumental to get folks jiving, the band builds up to Paul Janeway’s anticipated entrance. With Janeway on stage, the room erupts into cheers that would have been worthy of the Godfather of soul himself, James Brown. Janeway kicks off this party by saying, “We gonna see you move your ass right now!” To which the room quickly becomes a gyrating mass in response to St. Paul & The Broken Bones’ high-energy numbers.
Janeway really knows how to command a stage and provoke his audience, who are under his spell from the get go. His vocal style is very gospel-like, which is not surprising due to his background. He carries the passion of Brown, while combing the hunger of Amy Winehouse and Otis Redding. Kind of a weird combo, but it works out rather nicely. He can go full into passion filled wailing and then into soulful longing in a heartbeat.
St. Paul & The Broken Bones knock out their numbers flawlessly—aside from some minor technical issues with a microphone. They play covers of Sam Cooke’s “Shake,” a soulful rendition of Radiohead’s “Fake Plastic Trees” and David Bowie’s “Moonage Daydream.” Their own material is also striking, if not more so. They blast out “I’m Torn Up,” “Like A Mighty River” and the sad song “Broken Bones and Pocket Change” to a very receptive audience. These tunes are a perfect example of neo-soul being done right as it clearly respects a long and rich linage.
During the set I find myself grooving along to this powerful music, twisting and gyrating. However, when they play out their encore—after they temporarily bow off stage as a sort of traditional gesture—I find my legs have given way from the weight of this performance as well as from some slight fatigue. Though I am sitting on the floor for the remainder of the act, I just take it all in like a sort of healing light, but rather through a beautiful sound. By this point, that is about all I am capable of doing.

St. Paul & the Broken Bones leave their captive audience on a high note with a passionate rendition of Redding’s “Down in the Valley.” This is something one can walk away from feeling a little lighter on their feet and with a rejuvenated spirit. The Godfather himself knows that I needed this soulful sermon and even though I get on all right with my soul 45s, there is nothing quite like being a live witness to a brilliant soul act. It is simply breathtaking and lord knows I could do with more of these.