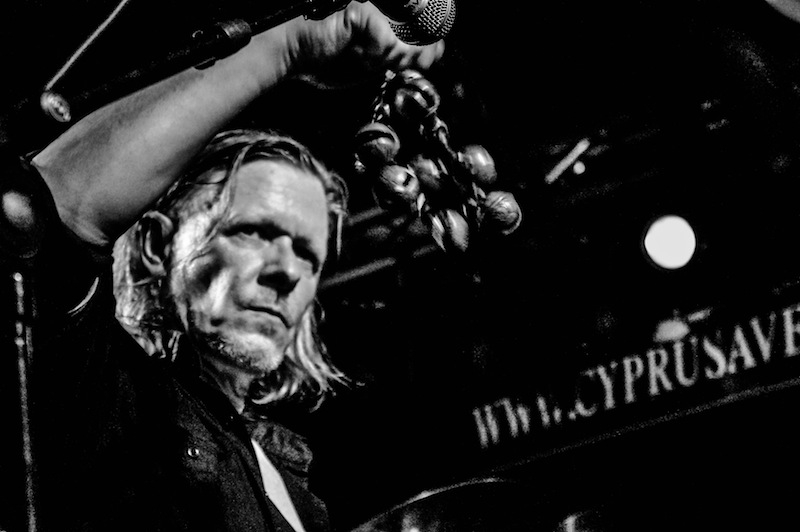 Let this be a lesson to those of you who haven’t seen Swans. It gets hot! I thought I was schvitzing while waiting for them to go on. At one point, my disgusted friend, Stohl, told me that I smelled like an onion farm. It was painful to hear, but it also had the virtue of being true. My stank was so noxious it offended even me.

It’s hard being that guy at the show. I did my best to make a joke out of it. Unfortunately no one thought it was funny. I don’t think my funk was ruining anybody’s night but it sure kept everyone at a distance. I forgot to slap on deodorant before riding my bike across town, but that was only part of the problem. My second mistake—and this one was crucial—was that on the advice of my girl Hadley, I squirted vodka in my pits in a sad attempt to combat the odor. She carries a spritz bottle of vodka for that very purpose. She smells amazing, so I have no idea why the distilled essence of fermented potatoes didn’t turn my pit aroma into Tuscan Leather. Maybe she was fucking with me.

The silver lining—if there was one—was that the stench did make me feel somewhat mannish. The feeling didn’t last long, though.

The opening act, Carla Bozulich, was a passionate performer who, despite being fairly morose, kicked ass anyway. She flailed on stage like a wounded chicken and had wild, black, medusa-like hair that dripped with sweat. She moaned things like, “do you feel it?” into a microphone that used her guitar pickups for amplification. I did feel it. She sang in a blanket of screeching feedback and slow, beautiful, piano chords. It was like a noisier Joy Division with an even worse sense of humor—but, you know, in a good way.

A funny thing happened during Bozulich’s set. At one point I got some serious vibes from her. She was looking deep into my eyes. It felt as if she observed the nethermost, gooeyest, regions of my soul and took a serious liking to them, too. She pointed at me and gave the universal sign of, “come hither.” I couldn’t believe it. She picked me, of all the people in the crowd, to come join her onstage. I figured she was powerless to all the pheromones I was kicking, so I went with it. I pointed to myself—mystified—and shouted the words, “Me? You really want me?”

I was positively elated.

As it turns out, Bozulich most definitely did not want me. That became all too apparent when I was brushed aside by a tall, lovely woman—whom I later discovered to be one Christine Mellor, who’s also a not-so-distant relative of the late, great, Joe Strummer I’ll have you know. Unbeknownst to me, Christine was standing right to my back and had been corresponding with Bozulich the whole time. “It’s me she wants,” she said quite matter-of-factly as her elbow dug deep into my ribs. She sashayed onstage and left behind her the whiff of a pixie. She did it with the elegance of a woman who had been beckoned by hundreds of rock stars before—probably because she had been.

I, on the other hand, stood there simmering in my own stench. “Some girls have all the luck,” I thought, watching them canoodle like poodles in heat.

When the song was over, they hugged. Christine danced offstage and Bozulich looked into the crowd and asked, “How does it feel when the hardest man in the room is a woman?” With that, the gallows dropped, and my emotional castration was complete. The rest of the set consisted of only exquisite pain for me. I rather enjoyed it to be quite honest.

When Bozulich finished, my friend Sam and I went outside to smoke and give my T-shirt some much-needed air. I looked over the people on the patio. I thought there’d be a stronger turnout. It was mostly folks clad in black, faded tattoos with greying beards–these were senior members of the hipster class, many of whom are old friends of mine. I thought there’d be more young people into Swans, but I was secretly glad there wasn’t. I overheard one fellow say, “I had to come outside. I’m getting too old for that kind of B.O.” Poor thing, little did he know, the B.O. (i.e. me) had followed him onto the patio.

It was a brief respite for all of us. Anticipation for Swans was high and almost everyone went back inside to watch them when they started. The first song began mellow, with a drone that went on for about 10 minutes but turned into a sonic thunderstorm. Michael Gira [check out SLUG’s recent interview with Gira] took the stage. He had long silver hair and a pale white face that showed decades of hard living. Truthfully, he’s one Skeletor-lookin’ motherfucker—a complete monster. This was a band of men at least in their late-forties. It didn’t matter. None of them were enfeebled in the slightest. As anyone who’s heard their last two records can attest, age has only made them mightier.

To describe Swans’ live set is nearly impossible—but I’ll try. Simply put, it was the most violently loud performance I’ve ever seen—and I’ve experienced Motorhead. Swans’ detractors will tell you that their music is monotonous, or that there are 30 minute-long songs without a single chord change. Fair enough, but their music is much more than that.

Over the past 30 years, Swans have perfected an inimitable style that is essentially a triumph of minimalism. Nothing they play is difficult, not technically. Still there is sophistication in its simplicity. It’s brutal music too, but what makes it vital is less its ferociousness and more how deceptively complex it is. Within the constraint of their much-maligned repetition, they’ve discovered a way to build entire worlds around a single vamp. The rhythm and accents are constantly evolving in novel ways. Harsh melodies intertwine with motley rhythmic structures. Tsunami waves of feedback wash in and out of the mix like orchestras of expertly manipulated noise. I’ve never heard another band use feedback so shrewdly before. This is a group with unparalleled restraint—in complete control—that wants to kill you.

I bought earplugs and should have used them. I decided that if I went deaf watching Swans it would be alright by me. A lot of people were dancing—believe it or not—almost as if they were in a trance. This turned the room into a pressure cooker. Still, I was hypnotized. Long periods of time would elapse like seconds. It was only apparent when it was over that we just endured a punishing two hour-long set. All of the dancing was evident in the air, which was thick and hard to breathe. For me that was one of the more satisfying parts of the show. Swans turned out to be a great armpit annihilator. In other words, in the end, a lot of people smelled just like me.