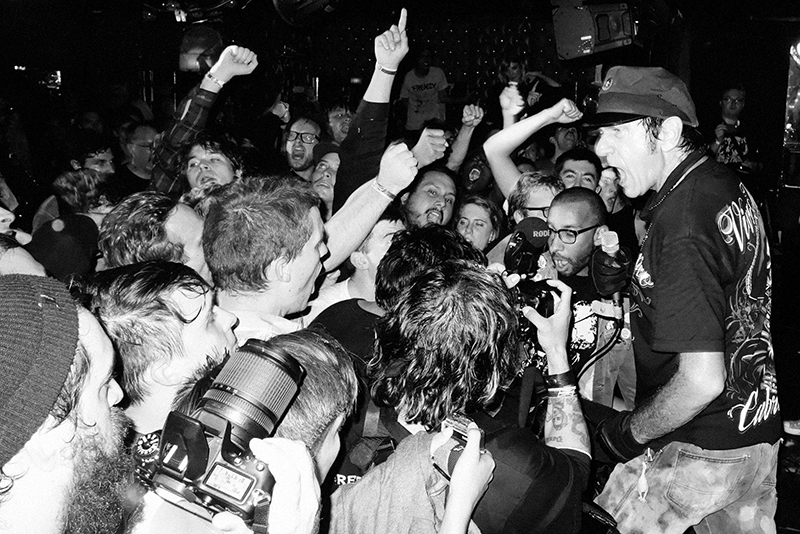 The Weirdos played an awesome set at Urban Lounge on July 17.

The Adolescents @ Urban Lounge 07.17 with The Weirdos and All Systems Fail

This evening holds a promise of excitement from two legendary groups who’ve helped build the foundation of punk—The Weirdos and The Adolescents. The latter I’ve seen before while living in London, but with the addition of the former, it’s all I can do to keep my composure as I hang in the patio of the Urban Lounge. The place was packed and, while this is not necessarily surprising for a Friday night, it is interesting to see several generations of punk rockers under one roof—studs, bristles and all. I can’t help but acknowledge some romantic notions of this gathering being a symbol of the rich legacy of punk in Utah. That said, my thoughts on the matter are set aside by the heavy drumbeat coming from inside the venue, a warning of the imminent performance of Salt Lake staple All Systems Fail.

Inside, All Systems Fail launch into their brutal, hardcore, socially and politically aware punk rock. Their stance on the stage is one of authority that suggests they are a group to be reckoned with, and with the red illumination of the stage, they are an impressive sight to behold. As a pit forms and punkers begin slamming about, All Systems Fail blast out their raw numbers like “Revolution For The Few” to their eager audience. Theirs is a sound meant for maximum volume to highlight their awesome intensity. When it is over, it takes a little bit to come back to earth after being delivered such a shockwave.

After a brief intermission, it is time for the act that I am most excited for and who offered the most solid performance of the evening—The Weirdos. Their presence onstage is commanding and they hold the gazes of their audience from the moment the start playing to the end. It becomes apparent after the first number that vocalist John Denny is having issues with the sound, as he tries—in vain—to get the attention of the sound guy. This hilarious situation is finally resolved after Denny draws the sound guy’s gaze.

However, this little hiccup does little to disrupt the energy of The Weirdos’ performance, which remains consistent and fun. During one breather, Denny offers some word of meaning to the audience, saying, “Power to the people. That’s my speech—power to the people. Fuck the corporate stranglehold.” Carrying on with their set, The Weirdos blast out “Neutron Bomb” and other solid numbers, each number building on the last. The mass of people in the room seem to continue moving, twisting and gyrating about. Several folks toward the stage have phones or cameras out and Denny makes sure that they get his good side during the set. His posing is a sign of obvious narcissism, but who cares? He looks impressive onstage and, to top it off, he and rest of the band are genuinely into performing. Bassist Zander Schloss is certainly a character, but apart from Denny, their drummer almost steals the show. Concert-goer LeAundra says, “The drummer is so fucking entertaining. He’s actually really good.”

The Weirdos have a solid conclusion, leaving me feeling satisfied. If this gig had ended on this note, things would have been peachy and keen, but it didn’t. When The Adolescents hit the stage, it was obvious something was a bit amiss. The beginning of the set started off smooth and any notice of frustration coming from founding vocalist Tony Cadena could have been taken with a grain of salt. In fact, in the beginning, Cadena’s frustration was channeled by eager fans getting behind each number and slamming about. This is not hard to do considering the catchy, high-energy style that The Adolescents produce superbly well with a pronounced bass and shredding guitar.

That is, until, an over-eager stage diver accidentally chips Cadena’s tooth, who then proceeds to lose his cool. As the diver gets off stage, Cadena throws his mic at him and a loud thud can be heard over the speakers. Cadena then departs from the stage. It’s very apparent that this is the final straw for someone already in a bad mood because his 16-year-old son was required to remain at the Adolescents’ hotel because of Utah’s laws against allowing those under 21 to enter bars and alcohol-serving venues. This happened during the number “Amoeba,” which bassist Steve Soto finished out with a flare of brilliance. Unfortunately, even though Soto does his best to keep things cool, a clearly agitated Cadena’s returns to the stage and publicly tells off of the stage diver—who was kicked out. This contributes to a quick escalation of tempers and hostilities. With a chorus of “Fuck you” and numerous beer cups launched at the band, Cadena and The Adolescents called it a night.

Members of the “Fuck you” brigade are not done aggravating the situation and clearly feel the need to let their frustrations be heard by attempting to follow the band into the green room and calling them “pussies.” This obviously does not go over well as Cadena pops out of the green room and nearly trades blows with a rather large brigade member in a plaid shirt. Only with Soto’s calm and cool interception and the prompt arrival of a security guard do things somewhat cool down.

I catch Weirdo’s guitarist Dix Denny’s look that silently said “this situation is really dumb” and get him and Denny to sign my gig poster. Mind you, this score of the evening is happening while the drama unfolds right behind me. As I start to make my way out of the venue, I nearly find myself in the middle of another ridiculous brawl. Tensions are still high in Urban, and after getting all the drama I do not need for the evening, I leave.

The question is, should The Adolescents have continued on? Yeah, probably. I mean, shit happens right? That is, they should have continued if Cadena could have kept his cool during his obviously pissy mood, and if things hadn’t escalated as far as they did. I imagine it’d be difficult to continue any gig when there are no visible allies in the crowd and the chants of “Fuck you,” “SLC ain’t nothing to fuck with” or “this is a punk show” overwhelm the chance for calm dialogue. I find all these chants rather embarrassing, but the latter one especially. “This is a punk show?” Come on, The Adolescents were among the first to make this genre what it is, and I’m sure they and their generation have a better idea of what punk means—at least Soto does—not the hand-me-down that that chant was inspired by. Maybe if we’re lucky, the next legendary punk band that rolls through will keep their cool when something unfortunate happens, and our scene can take a page from our icons on etiquette and protocol.