SLUG Mag Soundwaves
Episode #392 – Homephone
00:00 / 17:29
Spotify Stitcher
RSS Feed
Share
Link
Embed
One of the coolest things about being a They Might Be Giants fan is the knowledge that it doesn't really matter what era the band is in, how many times you've seen them or even if you like their latest album—their live shows kick all sorts of humorous ass. 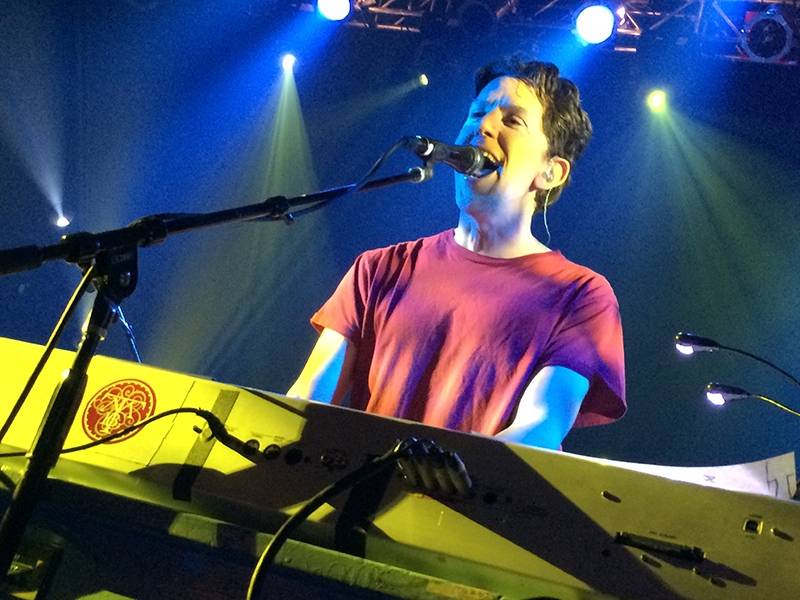 They Might Be Giants never fails to put on an entertaining show. Photo: Gavin Sheehan
One of the coolest things about being a They Might Be Giants fan is the knowledge that it doesn’t really matter what era the band is in, how many times you’ve seen them or even if you like their latest album—their live shows kick all sorts of humorous ass. So, unlike other fans who were overly obsessed with the hope that they’d play “Birdhouse In Your Soul,” I really wasn’t too concerned about what I’d be seeing—I knew it was going to be awesome.
This show was extra special because, rather than bringing along an opening band, They Might Be Giants played a double set: Over an hour of music, followed by a twenty-minute coffee break to make them “extra jittery and interrupt each other more,” followed by another hour of music. The minute John Linnell and John Flansburgh hit The Depot stage this past Tuesday, they started cranking out fan favorites like “Can’t Keep Johnny Down,” “The Mesopotamians,” “Number 3,” “I Palindrome I,” “Doctor Worm,” and an expanded, acoustic version of “Istanbul” that got the crowd roaring. For the first few songs the band happily posed for the cameras, but of course happily made fun of how inconsiderate we were.
The alternative duo are in the middle of their relaunch of the fan-favorite Dial-A-Song service for 2015, so the first hour had its share of new tracks like “Erase” and “Answer.” The highlight of the first hour was the preview of a new song due out later this week, their own cover of the Destiny’s Child song “Bills, Bills, Bills.” Flansburgh announced that he was playing the role of Kelly Rowland, which as he put it, “was one step above being ‘the fired one’”
During the break I got a chance to check out the merch table, which has consistently been one of the most impressive ones I’ve ever seen on any tour. They brought along vinyl copies of 1992’s Apollo 18, gray “Crew” hoodies and a small array of colorful T-shirts unavailable on the website. They’re also one of the few acts I’ve seen go through the effort of signing copies of a new album for fans and selling them at below-shop prices at the show. If I had gold stars, I would have stuck them to their instruments.
The moment the band returned, it was back on like nothing had happened. They jumped right into songs like “You’re On Fire,” “New York City,” “Ana Ng,” James K. Polk,” “Authenticity Trip,” “Sad Sack,” “Robot Parade” and more. It’s both an enlightening and surreal experience to be at a show where a band can release a song like “Underwater Woman,” a track that hasn’t been out more than a couple of months at best, and the audience is singing along to it with memorized lyrics as easily as “Man, It’s So Loud In Here” or “Alphabet of Nations.” Granted, the Utah crowd doesn’t bounce as much as we used to, but the love is there.
So how do you end a show where you already played two sets? With a double encore, of course! The band dropped their new track “Glean” along with obsessive fan-favorite song “Fingertips.” They left for a whole 30 seconds just to come back and close out the evening with—yes, “Birdhouse In Your Soul.” I mean, how else do you send a crowd of diehard fans happily into the rain?
Photos: