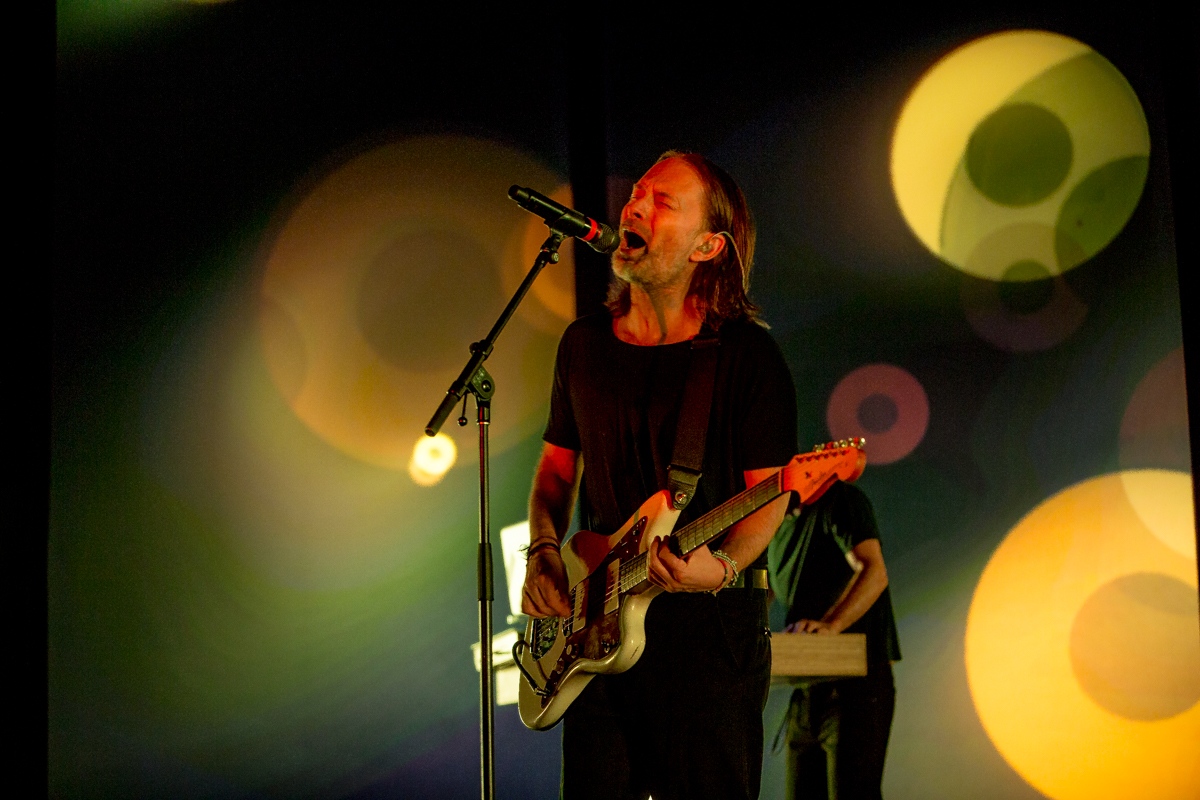 What’s the cost of deification? Pop music has a problem with turning our icons into idols, where the Lennon–McCartneys, the Bowies, the Enos are placed beyond humanity, fact and fiction blurred into oblivion. This trend has far from subsided, and last Thursday a few thousand of Salt Lake’s finest doled out $60 each to look God in the face at the Union Event Center. This time, God came in the form of the mythical figure, Thom Yorke, known best as the frontperson of Radiohead, but here performing a set of solo music. While his musical and social glorification stems from a real talent for performance and songwriting, his latest show exposed the seams of his work.

Before anyone took the stage, the venue imbued a specific mood in its patrons. Dim, blue lighting flooded the space, while barely audible ambient music set a tone for the night. Even though the crowd was tangibly excited and was stocking up on pre-show drinks, there was an undeniable creepiness hanging in the air. Oliver Coates took the stage an hour before Yorke, bringing his blend of classical and new age styles to the stage. His recent Shelley’s on Zenn-La on RVNG Intl. situated him along other artists like Kelly Moran or Bing & Ruth, but with more of a modal folksiness. His live sound was a bit quiet, an offense furthered by the general disinterest on the part of the audience, strengthening the pastoral serenity in the music. In an effort to properly introduce what he described as “Thom’s impending storm,” Coates’ final pieces moved towards a more disturbed take on his music. By the end, his cello was so affected as to resemble a chainsaw that buzzes in unpredictably somber harmonies.

With a career as varied and vast as Yorke’s, predicting what form his set would take was a moot task. What ended up occurring, though, must’ve surprised some fans. If Radiohead’s defining quality has synthesis of disparate styles into unique wholes, Yorke’s solo show gave an opposing feeling. Everything he played hovered around a techno-infused midpoint, framing the rock star as an underground experimentalist. It almost read as an attempt to put blinders on the elephant of Radiohead’s ubiquity—which was no doubt weakened by the coincidence of the group’s induction into the Rock & Roll Hall of Fame that day.

Where this show excelled most was visually. Firstly, Yorke and his group’s famed producer Nigel Godrich proved themselves as live electronic performers, with each musician deliriously alternating between synths, drum machines, computers, guitars and probably a mess of other equipment I couldn’t quite identify. On top of this, Tarik Barri provided live visuals, which leaned toward geometric abstraction that nonetheless properly backed Yorke’s music. In keeping with the mood set by the pre-show atmospherics, there was an unnamable eeriness that pervaded the set. Even at the music’s most raucous, there was still a languorous melancholy. It’s hard to sell dance-floor bangers when you have tracks like “Nude” or “True Love Waits” hanging in your past.

Maybe it’s my own preference, then, but I’ve always found Yorke to be at his most affecting in his ballads. Both through his band and solo work, the artist’s penchant for building atmospheric soundscapes into crushingly beautiful songs is nearly unmatched. Even disregarding all of Radiohead’s output for a solo show still leaves Yorke’s recent Suspiria soundtrack, which is full of emotional depth and sadly, only saw one song performed in the second encore. In a move to showcase a uniquely electronic side of Yorke’s catalog, the defining chameleonic nature of his work was sidelined.

In the paradox of Yorke’s moves to escape his inescapable past lies the night’s biggest disappointment: Yorke just might not be that great of a techno musician. His touchpoints are clear: The heyday of drum and bass in A Guy Called Gerald or LTJ Bukem, the first wave of IDM in Autechre or Aphex Twin and the newest wave of druggy, lo-fi house in Actress or Huerco. S. Put plainly, Yorke doesn’t perform or compose with these sounds nearly as well as any of those artists. The highly electronic version of “The Clock” off of The Eraser was one of the most memorable cuts of the night, but even the hard-edged breaks from Godrich felt awkward under Yorke’s characteristically nasal croon. It was neither fully dance or fully alternative, but rather an ill-fitted midpoint between the two.

Aside from the frustration of being offered a cheap imitation of a musical type, the omnipresence and stature of Yorke’s music further complicated his performance. If any tried-and-true practitioner of these styles ever decided to come to Salt Lake (which they rarely do), the luckiest would play to a small but receptive crowd at Metro. When the long-haired guy from Radiohead decides to bring his pet project on tour, he sells out a massive event space. While this problem runs deeper than Yorke’s musical decisions and a city’s ticket-purchasing habits, the whole exchange—both cultural and capital—feels a little icky. Techno and EDM have a rich and storied past that’s already facing erasure by big-budget rave scenes and the industries surrounding them, and Yorke’s music is a further stab at that.

In this context, there’s a fine line between paying homage and stealing. What doesn’t help Yorke’s case is his ambiguous, nearly agnostic performance habits. Even if he is consciously attributing these sounds to techno’s legacy, nothing about the night signaled so. At her famed performance at last spring’s Coachella, Beyoncé undertook a similar musical exchange. Importantly, though, she was much less shy about tracing a visible history of her sounds. Shout-outs to the history of Houston hip-hop and clear auditory references to DJ Screw and second-line music made up her show, always situating her in a long and continuous legacy of music. Thom Yorke treats British electronic music the same way Beyoncé treats her hometown’s sounds, but the former hides the grunt work of history. To the Yorke-ian acolyte, his is truly music descended from divine inspiration.