SLUG Mag Soundwaves
Episode #392 – Homephone
00:00 / 17:29
Spotify Stitcher
RSS Feed
Share
Link
Embed
If there is ever a time in the future when mankind is forced to colonize the moon, then Crook & The Bluff will be playing on a corner blues/jazz nightclub with the desolate, white prairie behind them. 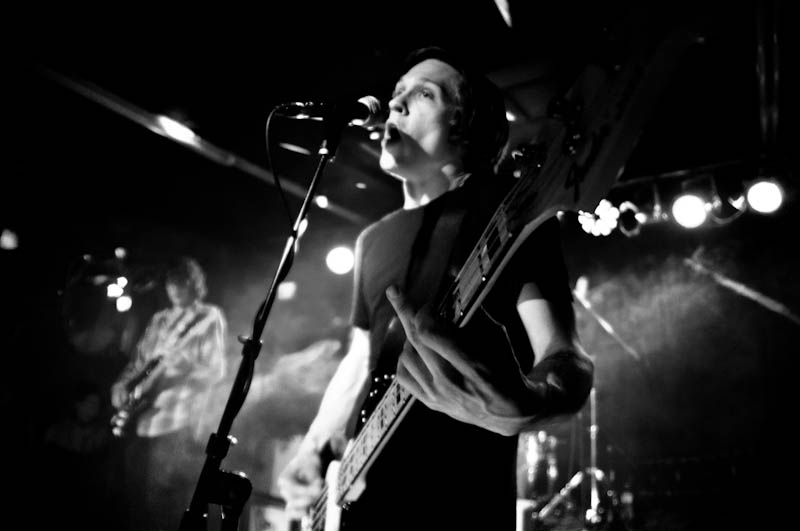 David Nelson on bass and vocals for Gypsy Cab. Photo: Gilbert Cisneros
After reaching The Urban Lounge, completely soaked from deciding to take the bus to the show and having to walk five blocks, the night was not starting out in the keenest of ways. However, The Great Magnet had known about this night with its infinite knowledge, and knew that it had blessed me with a great auditory system, and its penance for the rain was clear by the time the first act of the night, RuRu (Isaac Russell), had finished the first song of his set—a cover of the Eagles’ “Take It Easy.”
His voice has a pure sound—like James Blunt (taken an octave down) with some soul—and his music—especially on my favorite song of the night, “West Virginia”—took elements similar to the Eagles and added the traveling feel and moods achieved by ‘60s folk/singer-songwriters like Joan Baez. It was a perfect opener because, although it was just Russell and his guitar, and all of the other bands definitely had a more lively feel to their music, this great song-smith perfectly set the mood for the night.
If there is ever a time in the future when mankind is forced to colonize the moon, then Crook & The Bluff will be playing on a corner blues/jazz nightclub with the desolate, white prairie behind them. The sound that the band—comprised of lead vocalist/guitarist Kirk Dath, guitarist/vocalist Tad Wilford and newcomer (this only being her second show, but you’d never know) Sarah DeGraw—put together is utterly awe-inspiring. Combining elements of great blues with bits of spacey jazz and a hint of good old rock n’ roll, it was the musical equivalent of Stevie Ray Vaughan meets Casualties Of Cool, especially on my favorite song of theirs, “Devilish Deeds.” With their stage setup and lighting, I honestly felt like I was being transported via dreamscape to another world where Blues is king, and they were clearly the royalty of that domain.
As I watched Timmy The Teeth begin their set, I thought to myself, “You know, I don’t like a lot of country, but I like this.” By the end of the set I was ready to spur up, grab a copy of their new release, Just Another Day, and head out to learn the “Texas Two-Step” (which coincidentally, was the absolute best dance that could have been done during their song “Take The Blame”). They had me converted.
Their music had a touch of modern country feel (like a less cheesy Rascal Flatts), but was mostly comprised of the more rock-based country a la Travis Tritt. Since my mother was a Tritt fan, it allowed for me to enjoy the experience more than I think I may have been able to, had the music been extrapolated from a different source. Although I can promise you I won’t be hanging out at The Westerner anytime soon, I can honestly say that after having seen Timmy The Teeth, I’ve at least learned to appreciate a genre of music that I don’t know if I otherwise would have been able to.
The Great Magnet had one last trick up its sleeve. The battery on my phone was dead. I typically carry my charger with me, especially to shows. However, it was sitting on the counter, in the kitchen back home. What intensified the hilarity was that this was the last show ever of the band Tvsk/Gypsy Cab. The name is due to the fact that they had recently released a CD that was recorded under the name Tvsk, but they had been known as Gypsy Cab for many years prior. None of that really mattered at this point. It was going to be the demise of a band, and I wasn’t going to get any of it on film. The fact that they were utterly brilliant didn’t help.
Guitarist/vocalist Pat Boyer’s playing is so beyond the realms of great blues playing—it is utterly crushing that this is the only time I will have ever witnessed it in this capacity. It’s like a blend of blues in the style of Joe Bonamassa with the high-speed, ultra-chaotic-rock of Dave Navarro. Their music also contained elements of Bonamassa’s solo work as well as the musical stylings of Jane’s Addiction. The rhythm section of bassist/vocalist David Nelson and drummer Jesse Quebbeman-Turley was ridiculously solid. At times they could play the most breakneck, high-intensity rhythms imaginable, and then lay down a solid groove in the realm of Band Of Gypsys/Jimi Hendrix (they even paid homage to Hendrix by playing “Voodoo Child”).
After hearing their song “Bones For Teeth,” the only way I could describe their music is “blues with wrath.” It’s truly sad that this was not only my introduction to Tvsk/Gyspy Cab, but also a witness to their swansong … all thanks to The Great Magnet.
Photos: