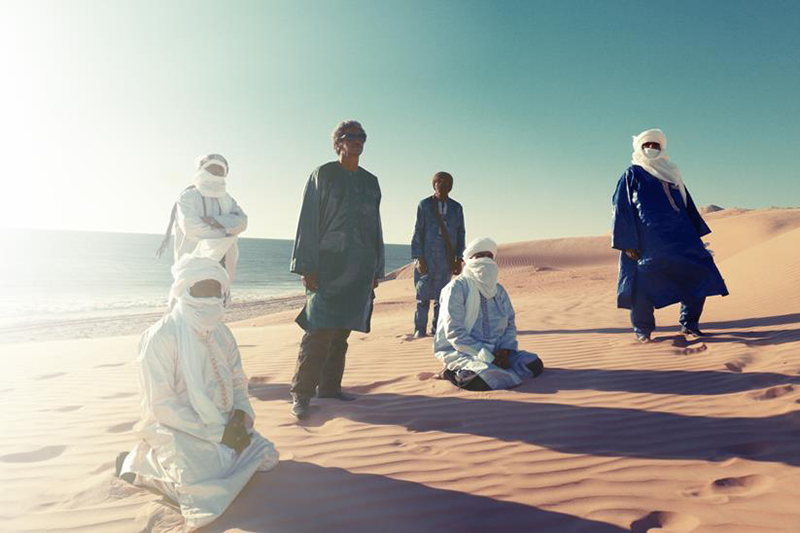 One of the consistent woes residents of Salt Lake City face due to the city’s status as a smaller urban area is that a good number of bands pass us by completely. Chief among these missed opportunities is a wealth of non-American and non-European music, because if you’re booking a tour out of Egypt on a shoestring budget, why the hell would you stop here if it’s not as well known as larger metropolitan areas? In a glorious exception to this rule, Tuareg group Tinariwen (based out of northern Mali) graced the stage at Metro Music Hall and gave a very KRCL-friendly crowd an unmissable night of some of the best contemporary funk music around.

Given the group’s massive and ever-expanding catalog, it was a super fan’s guess as to what specific compositions Tinariwen performed at Metro. Still, anyone present could appreciate the stylistic and emotional breadth that the group presented, especially within the ensemble’s bare-bones instrumental format (the group is more or a less a modified guitar-bass-drums outfit). Tinariwen are clearly masters of this cultural hybrid of a sound, still performing 30 years deep in a rock-based style that’s been bounced around the globe and passed through the generations. In an attempt to make American references, Tinariwen’s sound is something of a merger between the sparse sweetness of The Velvet Underground’s self-titled album and Che Chen’s avant-blues guitar-playing in 75 Dollar Bill.

The latter of these comparisons speaks to the hard-boiled jazz and blues roots at the heart of Tinariwen’s music, and their set at Metro was full of demonstrative moments. On their own, each guitar player spun off phrases that moved at breakneck speed, only to be bolstered by more layers of six-string workouts and silky funk basslines. While the septet’s maximums were more than noteworthy, some of the lighter and subdued moments were the most memorable. When the tempo and volume receded, the specific function of each instrumental line spoke more, and Tinariwen proved that laid-back doesn’t mean non-energetic as they held an impossibly tight groove even in their subtlest moments. The main melodies in these balladic tracks, more often than not delivered through vocals, were some rare moments of heart-wrenching passion in the group’s set.

Throughout Tinariwen’s lengthy show, their lineup underwent subtle shifts as members came and went, switched instruments and traded off vocal duties. While the group was clearly following a set list, the looseness of their stage roles gave the night a casualness that resembled more of a jazz showcase than it did a formal concert. Some moments were as pared down as a quartet, and the most explosive cuts featured a full septet balancing layers of dizzying guitar work and blistering hand percussion. At these highs, Tinariwen were unmatched. The sheer synergy between the seven members combined into a whole that was nothing short of breathtaking in its simple grandiosity. No one member was more important than the others, and the group effort toward a common goal gave Tinariwen’s sound a personable heft.

“Tinariwen sold themselves as the ultimate party band.”

Of particular note in Tinariwen’s ensemble were the two percussion players performing on a variety of hand drums within the set. Their synchronicity, both between themselves and with the surrounding band, was impeccable. The balance of polyrhythmic accents, lightning-fast hand rolls and a flawless, consistent groove gave Tinariwen’s performance a tangible electricity. The sheer force of their playing negated any concerns at the lack of a full drum set or electronically bolstered sounds. Especially as the night wore on and a sort of sonic Stockholm syndrome set in (and perhaps a little alcohol-induced looseness), Tinariwen sold themselves as the ultimate party band. The crowd never felt an absence of the ultra-compressed sounds found in contemporary dance music, and willingly embraced the group’s analog approach: light on big sounds but heavy on body-moving rhythms and inviting, communal energy.

More than anything, Tinariwen’s show at Metro showcased a band clearly in love with their music. If any sense of showmanship was (either purposefully or subconsciously) discarded in favor of straight-faced performance, the group more than compensated for this lack with their stunning musicianship and impossibly tight group playing. By the time the full septet took the stage for the fiery encore number, the remaining crowd—a chunk of the audience had inexplicably departed during the set’s final 20 minutes—was equally inclined to stand in awe of Tinariwen’s deft technicality, as they were moved to let loose and dance. Though the band had already played for a substantial 90 minutes, there was a feeling that their grooves could’ve ridden on for endless hours to come. Somewhere, there exists the perfect club where Tinariwen is the unstoppable house band from sundown to sunup.