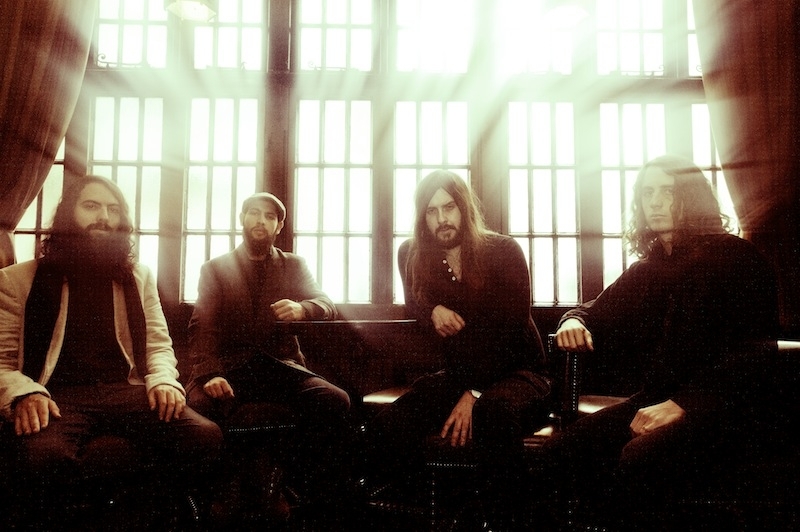 Uncle Acid and the Deadbeats @ Urban Lounge 10.04 with Danava

Tonight’s bike ride to Urban Lounge represents a certain inspiration that is provided by the scenery that complements the mood for this evening’s entertainment. Thoughts of summer are long passed, as the sun sets earlier and the night brings on a crisp chill. This immersion into the autumn is highlighted by the combination of leaves turning to a shade of deathly brown that is all but illuminated by the glaring street lights lining the road. This, to me, signifies that the month of All Hallows’ Eve has come upon us, and what better way to kick this off than to witness Uncle Acid and the Deadbeats blast out their fuzzed, psych-induced ’70s-style heavy metal that arouses nostalgia for the early years of Black Sabbath.

To further enhance my euphoric experience, I blast Blood Lust through my earphones as I race to the venue. The first time I came across these guys was via a sampler CD in Viva La Rock a couple years ago. Digging their vintage sound over the last couple of years, I cleared my schedule when I caught wind of Uncle Acid and the Deadbeats’ first U.S. tour, during which they would be blazing through Salt Lake City. My interest was further piqued after reading SLUG’s interview with the band. If I was not convinced before, I certainly was now—this was not something to miss.
I arrived to find a diverse assortment of metal heads and hip-looking types that made up the slowly growing line in front of the venue. Finally, gaining entry into the venue along with the denim- and leather-wearing rock n’ rollers, I become all too aware of the dark atmosphere that hangs over tonight’s gig that was extenuated by the dimly lit room. This gave off an aura that was seemingly foreboding.
After what seems to be a long while, despite being already set up, Danava take to the stage. Initially, their appearance is unassuming, despite their studded-black-leather rock star look. This perception, however, is the calm before the storm. When they are finally ready, they blast into their set with the raw, ’70s vintage heavy metal sound that envelopes the now pitch-black room. They immediately gain the attention of their audience. Numbers like “The Illusion Crawls” garner the clear visual appreciation of head banging, a clear homage to thy very metal gods. Danava’s display consistently builds on each measure, keeping the performance interesting and engaging. Though they are clearly playing on a nostalgic tune, some songs tend to sound somewhat similar to each other. Still, the performance is quite impressive, and I am certainly not the only one showing appreciation.
Upon Danava’s conclusion, I grab a drink and get some air. The smoking area seems to have an underlying feeling of anticipation and something else that I can’t quite put quite put a finger on. I hear the sound check, which I mistakenly assume means the start of Uncle Acid and the Deadbeats’ set. Their setup includes glowing, catlike eyes attached to the drum set, with flickering televisions scattered around the stage. This gives it an eerie appearance, worthy of their self-described genre—psycho music.
Presiding over a near-packed house, Uncle Acid and the Deadbeats deliver the metal gospel to the gathered and captivated audience. They start their set with a dramatic and ominous intro, followed by heavy guitar riffs that are backed by a pronounced beat. However, it is the fuzzed-out vocals and the projected appearance of a calm intensity that defines their presence tonight.
The conclusion of their first song does not allow for one to take breath. It seems that as soon as they stop, they immediately jump into their next number with perfect rehearsed precision. It’s as though I am watching a psych-metal-filled version of Homers Odyssey, with Uncle Acid and the Deadbeats being the sirens that lure the souls of those listening and watching, dragging those absorbed by their psych-induced sound past purgatory and straight to hell.
Unfortunately, this trance is interrupted by the vocalist bellowing, “Hey, pussies, stop fighting in here. Take that shit out back!” Looking through the crowd, I see a bouncer removing an agitator from the front of the crowed dance floor. Not letting this distraction define their performance, Uncle Acid and the Deadbeats quickly launch into their next number, much to the cheers of the audience. They knock out favorites like “I’ll Cut You Down” and “13 Candles,” hooking their mesmerized onlookers, while continuously building on the energy of each song. Throughout, the room remains vibrating with motion and buzzing with energy.
Concluding their epic performance with “Devils Work,” they offer no encore, and depart the stage—not surprising, as this seems to be becoming a norm. But, with each number being well over four minutes and filled with instrumentals, it’s understandable not giving an encore. I’ll freely admit that the long, drawn-out instrumentals don’t quite do it for me. That being said, for these guys, it represents the result of a brilliant composition that is, for the most, part engaging and provoking. This, my friends, is the symbol of the times a-changing. It’s very metal.
Photos: